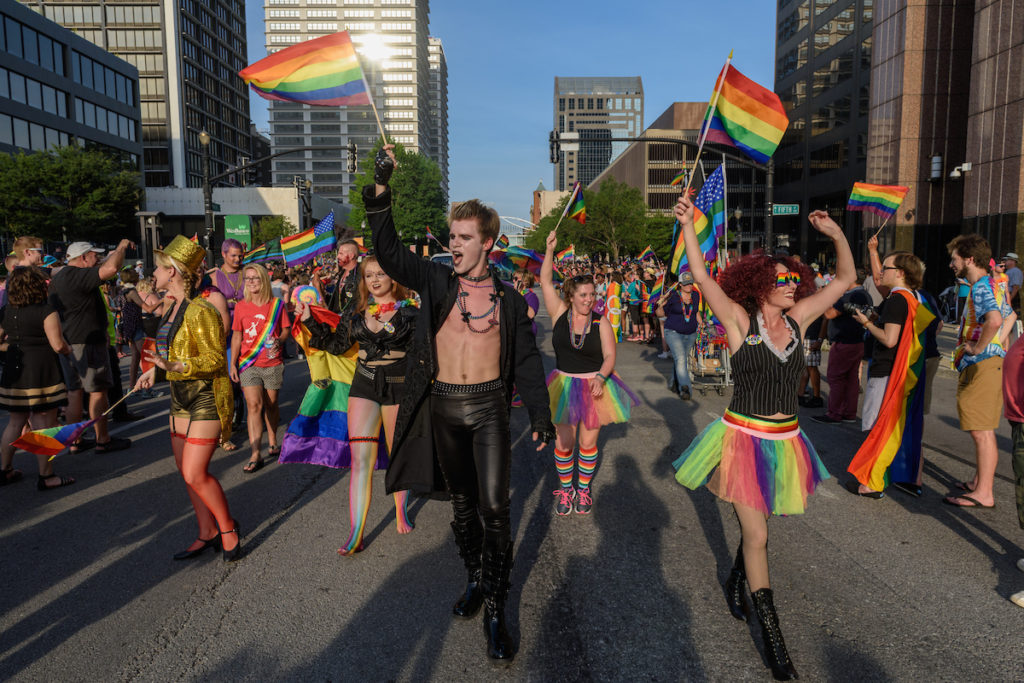 A past Kentuckiana Pride Festival | Photo by Brian Bohannon

Louisville’s LGBTQ community is long overdue for the opportunity to celebrate love and identity together in person. Although the Kentuckiana Pride Festival was postponed, then canceled, in 2020, then postponed earlier this year, it has since been rescheduled a final time and will run on Friday, Oct. 8 and Saturday, Oct. 9, at the Big Four Lawn downtown.

Festival guests will be able to experience many of the same draws that they always have: there will be a parade at 7 p.m. on Friday, which will start from Market and Campbell streets and end at the festival grounds on the Big Four Lawn. There will be more than 125 vendors selling food, clothes, accessories and more; in fact, the festival says they received more vendor applications this year than they were able to accept, which they consider a very positive sign.

Of course, there will still be the hallmarks of a world trying to recover from the pandemic — guests at the outdoor festival will need to present evidence of a vaccine or a recent negative COVID test to enter. Masks won’t be required, but they will be strongly encouraged and will be available for free throughout the event space. While hand sanitizer stations will be available and most “high-touch” surfaces will be disinfected frequently, one area, the Family Fun Zone, has been overhauled entirely: rather than having inflatables and activities that would normally put children in close proximity with one another, event staff will hand out activity bags instead, which kids will be able to use during or after the festival.

“We still want to encourage safety, but we want celebration to continue,” said Rodney Coffman, president of the Kentuckiana Pride Foundation. “That’s basically what people have been telling us over the past nine months. We want this. Make it safe. We need to have something fun, something joyful, something to celebrate.”

There were more than 20,000 guests at the last Kentuckiana Pride Festival in 2019, and Coffman told LEO that festival attendance always “grows and supersedes what we had planned” each year. Even with certain COVID-related restrictions in place this year, he is confident that the community will be drawn to an event like this after spending the last year apart.

“Pride’s always so liberating for so many people,” he added. “Even though we’re still in dark times, we can still have a safe event and enjoy one another.”

This year’s entertainment lineup includes high-profile performers that were chosen to appeal to multiple generations of LGBTQ guests. Saturday’s featured acts include Todrick Hall and Neon Trees. Hall is a performer and YouTuber who has racked up numerous Broadway credentials in shows like “Kinky Boots” and “Chicago.” He also co-executive produced Taylor Swift’s music video “You Need To Calm Down,” which stars a number of other LGBT celebrities, including Billy Porter, RuPaul and Ellen DeGeneres. Neon Trees, whose lead singer, Tyler Glenn, is gay, is a band known for energetic, feel-good pop hits like “Animal” and “Everybody Talks.” The lineup also includes performances from 1980s pop star Tiffany, known for the singles “I Think We’re Alone Now” and “Could’ve Been,” as well as DJ Spinderella from the 1990s hip-hop group Salt-N-Pepa. There will also be a number of performers from the Louisville area, including Cover Me Badd, the Louisville Gay Men’s Chorus and Ladrea Maria, who will take the stage throughout the weekend. The full schedule is not available yet to the public but guests can check the festival website in the coming weeks for more information.

While the main events of Kentuckiana Pride will only happen on Friday and Saturday, the Pride Foundation will offer other events for the LGBTQ community before and after the festival itself. Chill BAR Highlands, a gay bar on Bardstown Road, will host a kickoff party on Thursday, Oct. 7, then a post-Pride cookout and drag show on Sunday, Oct. 10. The Pride Foundation has also hosted or sponsored events over the last year –– Family Day Out at the Zoo, Drag Story Time on Zoom and more –– to help the community keep up the momentum amidst so many postponements and cancellations. (The Kentuckiana Pride Festival is not the only one of its kind to have been offset by the pandemic; another large local Pride event, the Louisville Pride Festival, went digital in 2020 and was cancelled for 2021 a month ago.)

In early October, though, festival guests will be able to enjoy each other’s company once again underneath a flurry of rainbow flags. After a year and a half of stress, sickness and separation, that multitude of rainbows will be a fitting symbol for the LGBTQ community’s long-awaited hope of gathering together in safety and joy.