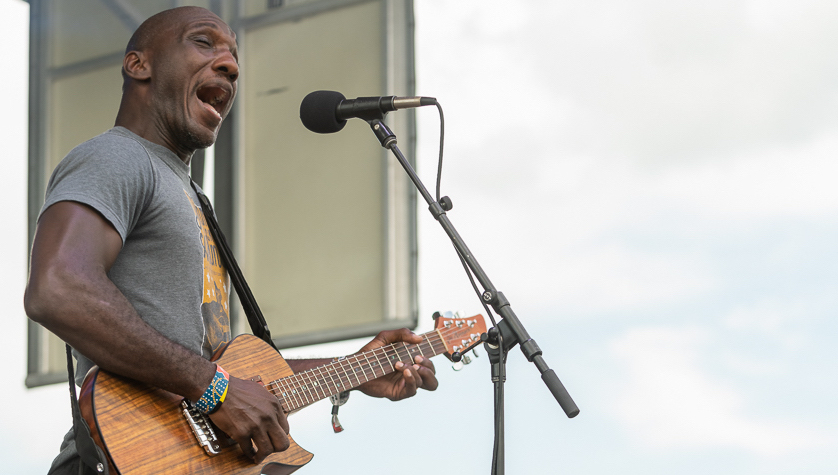 Cedric Burnside | Photo by Tracy May

Cedric Burnside and Suzanne Santo are bringing their brand of blues and roots to the Falls of the Ohio this Saturday night. The show will begin at 6:30 p.m.

Burnside, a two-time Grammy nominee and Blues Music Awards winner, was born in Memphis, Tennessee but raised in Holly Springs, Mississippi. He spent his time in Mississippi with his grandfather R.L. Burnside. By the time he was 13, he was touring with his grandfather as a drummer in his band. Burnside has played with many members of his well-known family, and toured with Widespread Panic. This year, Burnside was awarded a National Heritage Fellowship through the National Endowment for the Arts. This Fellowship is the highest honor in folk and traditional arts. His music is in a traditional blues vein with lyrics touching on modern subjects.

Playing with Burnside, Suzanne Santo grew up in the Rust Belt of the United States and has worked as a model and actress in addition to her music career. She lived in L.A. for a while, playing in a band called Honeyhoney, an Americana, roots-rock outfit. Their video for a song called “Little Toy Gun” was directed by actor Kiefer Sutherland. She brings to the show a mix of rootsy rock with dark lyrics, smoky vocals and solid guitar playing.

Concertgoers are encouraged to bring a chair or a blanket. VIP guests will have reserved table seating on the deck of the Falls Interpretive Center. Because of the pandemic, all guests are encouraged to be vaccinated or get a negative COVID test before coming to the show.

Though masks are encouraged, the concert promoters won’t be requiring masks for fully vaccinated individuals since this is an outdoor concert.

Food will be provided by Parnelli’s, Ramiro’s Cantina and Wink’s Homemade Ice Cream.

Copper and Kings Distillery and Upland Brewery will be handing the beverage options.

All proceeds from the show benefit the Falls of the Ohio Foundation.