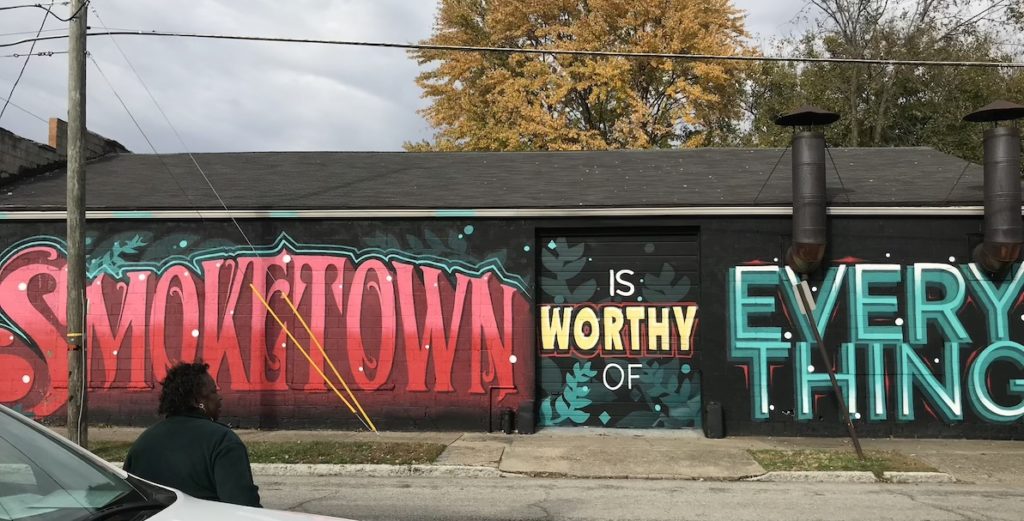 A mural in Smoketown Photo by Danielle Grady

Smoketown is one of the oldest traditionally Black neighborhoods in the city of Louisville, and this weekend on Sept. 11, it will be home to the first “Smoketown — A Place We Call Home” resource fair and neighborhood celebration.

Smoketown was originally named because of the proximity to the cigarette industry where many of the residents worked at the tobacco warehouses that surrounded the neighborhood. In recent years, Smoketown has been the focus of many revitalization efforts and artists have long made workspaces in the area.

The Community Foundation of Louisville in partnership with the MELANnaire Marketplace and the Wealth Building Movement would like to invite past and present residents of Smoketown to meet and gather in celebration of the rich history this weekend. The event is a celebration, but there will be discussions about strategies for improving the neighborhood through affordable homeownership, home maintenance, tenants’ rights and advocacy to fight against rent gouging, which is often an issue in areas where Black ownership is low despite the population of the area.

According to the press release, Smoketown is the only post-Civil War neighborhood that was historically settled by African Americans that remains in Louisville.

The event happens Saturday from 1 to 5 p.m at Preston and Finzer Streets

There will be live entertainment from Sheryl Rouse, the youth from AMPED and DJ John Q. In addition, there will be food booths including Garden Girl Foods, Gore’s Smokeout and Brain Freeze: Cones for a Cause. Over 20 Black-owned vendors will be part of the MELANnaire marketplace, and the afternoon will include a panel discussion on Black Wealth.

There will be a kids’ zone, inflatables and a STEAM exchange.

The event is free and open to anyone with a connection to the Smoketown neighborhood.