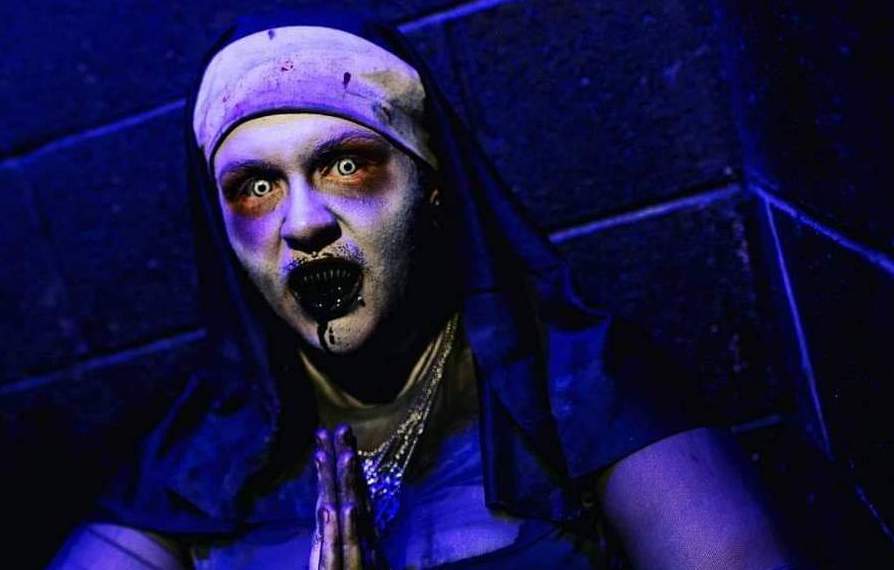 You don't want to meet this nun at The Haunted Hotel. | Provided photo

As the Halloween season approaches, we know many of our readers are keen to experience the thrills and chills of our area’s haunted houses, haunted trails, and more. Here’s our guide to 13 haunted attractions in and around Louisville.

Please remember to obey all posted signs and warnings and refrain from touching any scare actors.

American Horrorplex
2012 Northwestern Parkway | americanhorrorplex.com | $25 general admission, $40 and up for VIP options | 8 p.m.–2 a.m. | Fridays and Saturdays through Oct. 30
The Horrorplex tells the story of two ex-Nazi doctors turning an insane asylum haywire. Check out their spooky Christmas event later this year, too.

Baxter Avenue Morgue
451 Baxter Ave. | baxtermorgue.com | $20 general admission, $40 SpeedPass  | 8 p.m. – 1 a.m. Fridays and Saturdays, 8 p.m.-11p.m. on select Sundays and Halloween | Fridays, Saturdays, and some Sundays in October
This one has all the classic elements of a gruesome Halloween attraction: blood, dead bodies, and, of course, chainsaw-wielding clowns. They do, however, offer “Kentucky Frightened Chicken doors” for scaredy-cats looking to make a safe escape.

Danger Run
501 S. Hurstbourne Parkway | dangerrun.com | $29.99 and up per carload | 6 p.m.-10 p.m. Sunday through Thursday, 6 p.m. to midnight Friday and Saturday | Daily in October
There’s a big twist in this scary scavenger hunt: you do it entirely from your own car! Using an app, you solve clues as you drive around Louisville (or Southern Indiana, if you choose that option) to various haunted locations. They also offer add-on passes to give participants fast access to some of the most popular spooky attractions, including several listed above.

The Devil’s Attic
647 W. Hill St. | thedevilsattic.com | $24 general admission, $32 Speedpass | 8 p.m. –12:30 a.m. | Fridays and Saturdays in October
If your preferred brand of spookiness leans toward the supernatural, The Devil’s Attic is the place for you. Make sure the Devil doesn’t steal your soul before you leave.

Legend at Pope Lick Haunted Woods
4002 S. Pope Lick Road | ultimatehalloweenfest.com/haunted-woods.html | $29.99 adult general admission, $19.99 child general admission | 9:00 p.m. – 1:00 a.m. | Fridays and Saturdays until Oct. 23
This haunted forest is actually just one part of a much larger attraction, the Ultimate Halloween Fest, which features a wide variety of Halloween-themed activities, including an escape room, a midway, scary movies, screenings of ‘Rocky Horror Picture Show,’ and more. But if you’re in for a fright, you’ll enjoy the new setup to the attraction, which allows guests to walk through at their own pace with no line! And fun fact for reality TV fans: the attraction’s already gotten a glowing review from “90 Day Fiance”’s Paul Staehle, according to his Instagram.

(Note: the locations, prices, and hours of other Halloween Fest attractions may differ; see website for details.)

Waverly Hills Sanatorium
4400 Paralee Drive | therealwaverlyhills.com | Tour prices vary | Times vary | Fridays and Saturdays
The one, the only, the Waverly Hills Sanatorium: it’s back, but not how you think. The Sanatorium actually won’t  be hosting its traditional haunted house this year, but you can book paranormal and historical tours instead to investigate one of America’s most haunted buildings.

Black Orchard Haunted House
704 Kentucky St. Shelbyville, Kentucky | blackorchardhaunt.com | $25 general admission, $40 VIP, $60 front of the line | 8 p.m.–12 a.m. | Fridays and Saturdays through Oct. 30
The rather detailed storyline at Black Orchard involves a figure known as The Butcher. Come out to Shelbyville if you’re brave enough to meat him.

Field of Screams
248 Darnall Ave., Brandenburg, Kentucky | fieldofscreamsky.com | $25 main attractions, $15 Hayride to Hell, $35 all attractions | Dusk–1 a.m. | Fridays and Saturdays in September and October
There’s certainly more than one opportunity to get scared here –– between the Hayride to Hell, corn maze, haunted barn, and more, you’ll find plenty to send shivers down your spine.

Literally, A Haunted House at The Culbertson Mansion
914 E. Main St. New Albany, Indiana | Search Facebook  | $15  | 7 p.m.–11 p.m. | Fridays and Saturdays in October
Yes, that is its actual name, and it’s exactly what it sounds like: a haunted house inside one of downtown New Albany’s already-most-haunted houses. (You pass by it on the Wicked Walk, in fact!) It’s a little like the Haunted Mansion at Disney World, but significantly cheaper and faster to get to.

Malice Manor
640 Providence Way Clarksville, Indiana | malicemanor.com | $25 general admission, $40 fast pass, $60 front of the line  | 8 p.m. – 1 a.m. | Fridays and Saturdays in September and October
Across the river in Southern Indiana is an all-indoor haunted house with more than 10,000 square feet –– or should we say scare feet? –– of frightful sights and characters.

New Albany Wicked Walk
Tour starts at 155 E. Main St., New Albany, in front of The Odd Shop | newalbanywickedwalk.com | $20 | 6:30 p.m. – 8:30 p.m., 9:00 p.m.-11:00 p.m. | Fridays and Saturdays in October
This one’s perfect for people like me who love chilling stories about ghosts and serial killers but just can’t do jump scares. I recommended the Wicked Walk in a Staff Pick a few months ago, and it’s even more fitting now. You won’t see anything paranormal or gruesome, but you’ll learn about the spooky and sinister history of downtown New Albany –– ghosts and serial killers abound.

Taylorsville Terror
3000 Bloomfield Road, Taylorsville, Kentucky | facebook.com/taylorsvilleterror | Fridays and Saturdays in October
This year, Taylorsville Terror is taking it back to 1984. The haunted trail/house’s neon and pixels are a pretty sharp turn from typical scare attraction themes, but rest assured there’ll still be plenty of things to give you a fright.