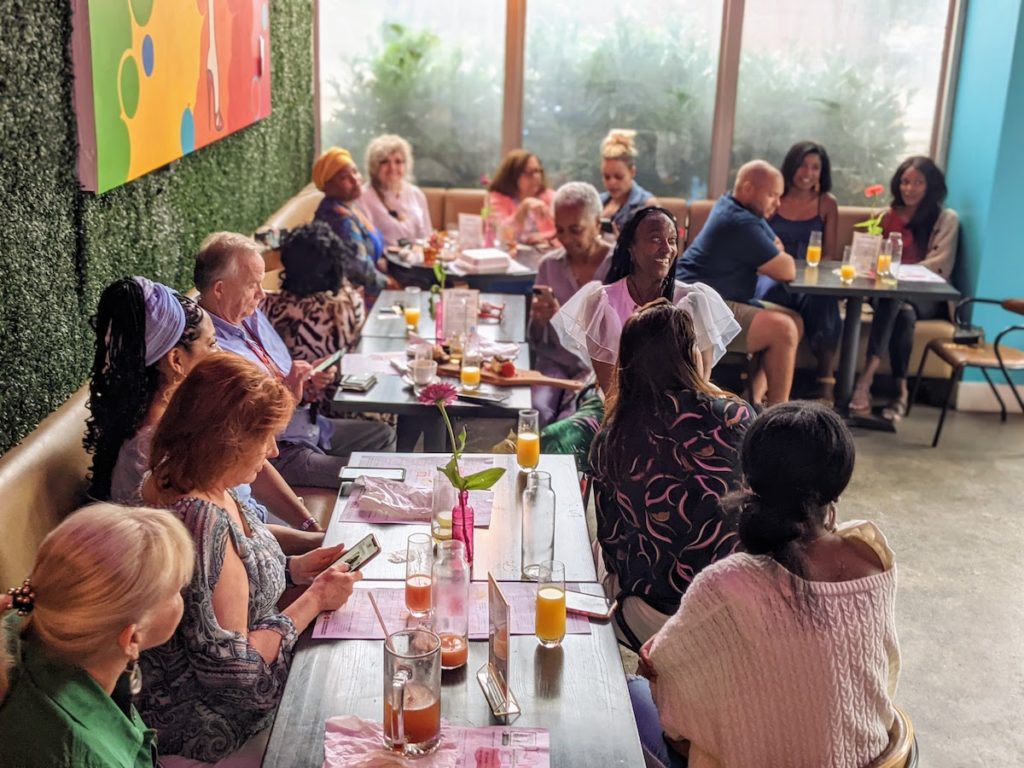 CC's Kitchen is requiring a vaccine or COVID negative test to dine inside the restaurant. | Photo courtesy of CC's Kitchen

The line to get into drag brunch at CC’s Kitchen last Sunday stretched from the door to the street, according to owner Corey Milliman. At the hostess station, customers had to flash a card to sit indoors: Not a driver’s license —  CC’s isn’t a bar — but proof of vaccination. Those who couldn’t produce one, or evidence of a negative COVID test, were seated outside on the patio.

CC’s Kitchen is thought to be the first restaurant in Louisville to require proof of vaccination or a negative COVID test to eat inside. But, the idea is catching wind in the city, particularly in the entertainment space: After two major, local festivals announced they’d be doing something similar to CC’s, several independent Louisville venues have followed suit.

It’s the “vaccination passport” that some conservative politicians have hysterically likened to the yellow Star of David that Jews had to wear in Nazi-occupied Europe. But, the business owners implementing it say it’s a simple measure to keep customers safe. There’s little government guidance on vaccine mandates. Businesses seem to be following the lead of those who went before them. So far, it’s up to individual organizations in Louisville to decide whether they want to implement a vaccination requirement. But some cities, like New York, New Orleans and San Francisco are requiring businesses to.

When Milliman announced his vaccination and test requirement on Aug. 6, he said he didn’t know he was the first restaurant to do so in Louisville. He just wanted to have one.

“I was diagnosed with COVID in February. I’m still dealing with long hauler symptoms, and I don’t want anybody else to experience those,” he said. “I just kind of want to do my part to keep protecting my customers and protecting my staff.”

A few days later, Abbey Road on the River music festival in Jeffersonville announced it would instate a similar requirement. Since then, Louder Than Life music festival, Zanzabar, Headliners Music Hall and The Flamingo Lounge in Louisville have all adopted their own.

Lollapalooza may have been the first major U.S. music festival to announce a vaccination or negative COVID test requirement when it did so in late July.

Stacey Yates, vice president of marketing and communications for Louisville Tourism, speculated that the music industry is following Lolla’s lead. Other than a few local restaurants and music venues, she said she doesn’t know of any other leisure businesses in Louisville that have a vaccine or negative test requirement. But, the city’s Kentucky International Convention Center and the Kentucky Exposition Center are requiring masks indoors since they are state government-operated.

In response to an interview request, Louisville Metro Public Health & Wellness spokesperson Kathy Turner said that the city is currently relying on “individual workplaces to make their own decisions on vaccinations,” but the department stresses “that vaccines are the best way to prevent the spread of COVID-19.”

Gov. Andy Beshear has advocated for employers to require vaccines. But, he hasn’t committed to mandating vaccines in any capacity and has only recently started mandating masks in public schools.

Dr. Anthony Fauci with the National Institute of Allergy and Infectious Disease has advocated for more local vaccine mandates.

When asked for Louisville Tourism’s thoughts on a vaccine mandate, Yates said, “I think I speak for the industry to say that whatever the guidelines are from the CDC, and whatever our state enacts, we will do whatever we need to do responsibly to keep business flowing.”

But Milliman said he wishes that Louisville would mandate vaccines to enter gyms, bars, movie theaters and restaurants. For now, he’s happy to see other businesses following his example.

“COVID is getting worse every day, not better right now, so I hope more announce it,” he said.

“It’s something I actually wanted to do since vaccines rolled out, really,” Evans said. “It’s hard to be the first person. I think everyone was waiting on each other to do it. Some people have been concerned with the optics. A lot of business owners have been concerned about alienating people, and making it feel political, you know, and it shouldn’t, but that’s just the way it is. I think a lot of people have been scared to do it.”

Milliman with CC’s initially received a lot of backlash for his vaccine policy.

“You know, we got death threats, we got threats to burn the restaurant down, we got threats on my home, somebody got ahold of my personal number,” he said. “I mean, it was miserable. The first 72 hours after it went on TV was absolutely miserable.”

But, a week and a half in, he said, detractors have quieted down, and he’s started to receive positive feedback from visitors. Customers are driving from over an hour away to eat at CC’s. People with visible medical conditions are visiting. His restaurant is booking reservations earlier now than it ever has. At drag brunch last Sunday, a few customers were upset about hearing they’d have to sit outside without proof of vaccination or a negative test. But, once they learned they could sit outdoors and still watch the show, Milliman said they were placated.

Yates said that some audiences and customer bases might be put off by a vaccine mandate, while others could be encouraged to attend an event with one. Louisville Tourism will keep tabs on how local festivals’ mandates affect how many people attend, she said.

Both Milliman and Evans said that they feel their requirements are reasonable, since they don’t exclude unvaccinated customers.

Evans said, “Honestly, I don’t give a shit if there’s negative feedback. I give no fucks what anyone has to say about it. If they’re offended by it, and the concept of safety, I don’t really care about whether they come to my concerts or not. It’s set up to where we’re not alienating anyone. We’re not saying you have to be vaccinated to come to our shows. We’re saying that, if you’re not, just make sure to get a test, make sure that you’re safe. I don’t see why anyone would be offended by that.”

At CC’s, each customer is asked at the hostess station for their vaccination card, a negative test or a photo or scanned version of either document. They can also add their vaccination info to VaxYes, an app that creates a digital “vaccine passport” for users. Children under the age of 12 are exempt from the requirement.

For people who are unvaccinated, CC’s and Headliners Music Hall require a negative COVID test within 48 hours for them to be seated inside. Other businesses and festivals, like Zanzabar, the Flamingo Lounge, Louder Than Life and Abbey Road on the River, allow unvaccinated customers to enter if their negative COVID test was taken within the last 72 hours.

While there is no CDC recommendation for how long an unvaccinated person should test negative for COVID before attending an event, the federal agency requires that international travelers test negative 72 hours before entering the U.S.

Despite the initial backlash, Milliman doesn’t regret mandating a vaccine or a negative COVID test at his restaurant.

“It felt really good to actually do that and be on the front end of this,” he said.  “For the sake of the dollar, I didn’t want to put customers at risk. I didn’t want to do the minimum required. I felt it was important to go the opposite direction and do as much as we possibly could.” •