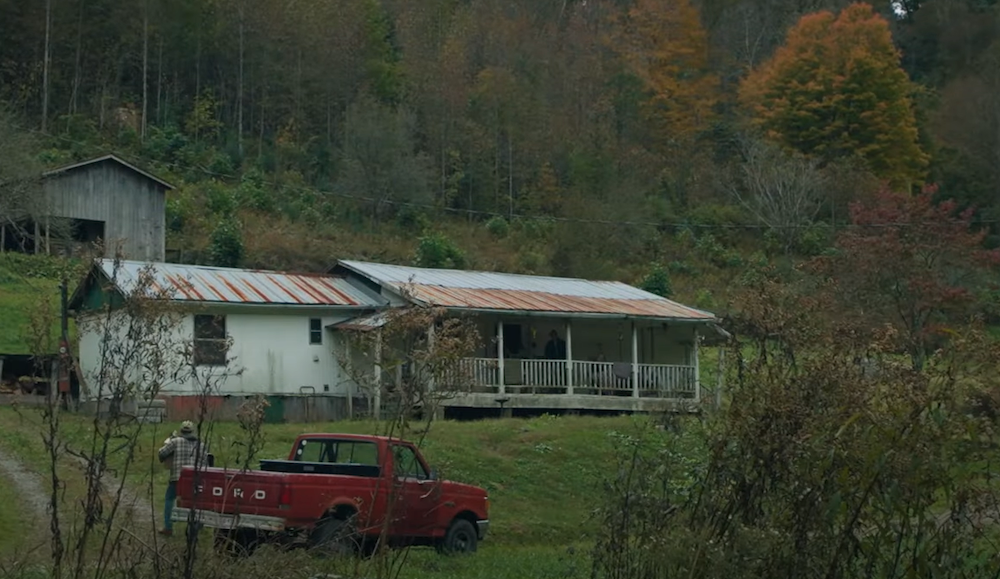 A still from "The Evening Hour."

A new film shot in Harlan, Kentucky, is showing in Louisville twice this week.

Braden King’s “The Evening Hour” is a film adaptation of Carter Sickels’ novel. The story follows a young man, Cole Freeman (played by Philip Ettinger), who is trying to make ends meet in a mining town that’s declining. It is a story that many Kentuckians are all too familiar with, including the need to take actions that are not necessarily the most legal or, perhaps, the most moral. The crux of the film hangs upon a relationship Freeman has with an old friend who returns to the town and threatens his way of life.

“My experience of The Evening Hour’s creation as a film was one of deep collaboration by artists from near and far with a particular place and a particular people, born of a faith in connection,” said Harlan County author Robert Gipe in the film’s press notes. Gipe advised King during the making of the film.

He continues, “It is no small thing in this day and age to see and be seen, to be found enchanting and to be incorporated into the creation of new enchantments. It was a pleasure to welcome Braden and his people into our lives here in Harlan County.”

King told LEO, “Making THE EVENING HOUR in Harlan, KY, was a powerful experience for all of us.” he said.  “The hospitality and collaboration we found in Harlan was deeply rewarding and unlike any other film I’ve made. I was initially drawn to Carter Sickel’s novel because of its strong sense of place and the nuanced, complex, human portrait of Appalachia it contains. It’s a great honor to have been able to make the film where we did and to finally be able to bring it back home this weekend.”

In a press release, King speaks about this collaboration more fully.

“This film is 100% a collaboration with the people of the southeastern Kentucky counties of Bell, Harlan and Letcher,” said King.  “We could not have made it without their trust, contributions, talents and input. That’s actually the thing I was happiest about when we first got the call from Sundance. ‘OK. Good. We did right by our people. We did right by our friends who gave us their trust’. But at the end of the day, the bottom line is always the same: you spend time, you look, and you listen.”

Portrayals of our Appalachian family that sees them as complex and human are sometimes difficult to find. It sounds as though The Evening Hour avoids that trap and honors the people of Appalachia in a lovely way.

The film is having a small tour of the state with two stops in Louisville.

You can see the film tonight at the Speed Museum’s preview, or tomorrow at Baxter Avenue Theatres Filmworks with a Q&A at The Back Door following. If you’re adventurous there are a couple more showings in the state this weekend.

Opening night of the ‘The Evening Hour’
Baxter Avenue Theatres Filmworks
Screening at 7 p.m. Q&A follows with director Braden King and author Carter Sickels. Drinks following the Q&A are around the corner at the Back Door.

Free Outdoor Screening
Southeast Kentucky Community and Technical College, Harlan Kentucky
Screening at 8:15 p.m. Any and all who are interested are welcome for a semi-private BBQ for the “The Evening Hour” family over at the VFW Hall in Baxter at 5 p.m. The VFW will also be held open for all who want to swing over after the screening. Soundtrack musician Darrin Hacquard will play a short set before the film at SKCTC. Director Braden King and author Carter Sickels will introduce. Gipe will be the guru he always has been. Let the organizers know if you’d like to come have dinner or a drink before the screening at the VFW.

Free Screening
Appalshop, Whitesburg, Kentucky
Screening at 7 p.m. Q&A follows with director Braden King. Free drinks for anyone that gets a new “The Evening Hour” tattoo at The Parlor Room.