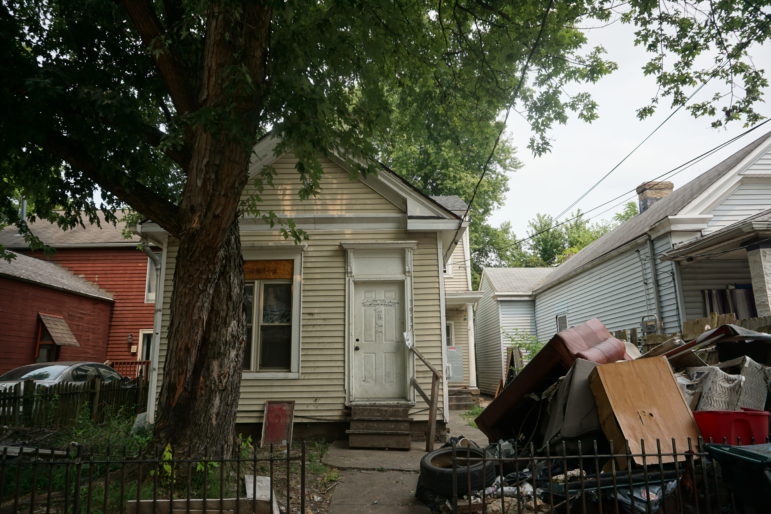 A now-vacant house in Portland that was raided by police last May. | Photo by Jacob Ryan

This story was produced by the Kentucky Center for Investigative Reporting, a nonprofit newsroom by Louisville Public Media. For more, visit KyCIR.org

Under intense public scrutiny and a federal investigation, the Louisville Metro Police Department has effectively stopped forcing their way inside people’s homes to execute search warrants.

Police have conducted just four forced entries related to search warrants in the past 14 months, a steep decline compared with the seven months prior when police conducted 67 such raids — using battering rams, sledgehammers, kicks and more to bust into doors and windows at a rate of nearly twice a week.

Oftentimes, police were on the hunt for drugs.

But the agency has changed course since LMPD officers forced their way into Breonna Taylor’s home and killed her during the execution of a drug-related search warrant, sparking protests against police brutality in late May 2020.

The Department of Justice is investigating LMPD to determine if the agency has a pattern or practice of violating people’s federal civil rights. The investigation will focus, in part, on their use of search warrants.

A police spokesperson declined to make officials available for an interview. But Chief Erika Shields recently  told the Washington Post that  the “backlash against policing” makes officers reluctant to proactively police the city.

In an emailed statement, LMPD spokesperson Elizabeth Ruoff said the protests impacted every aspect of LMPD operations — “including the types of investigations which lead to search warrants.”

She pointed to depleted staffing levels as a factor, saying the LMPD has fewer investigators available to pursue cases which result in search warrants, and self-initiated and enforcement activity has dropped. The countywide ban last year on no-knock warrants also may be causing investigators to stop getting search warrants “due to the potential danger involved,” Ruoff said.

The danger forced entries pose — to the targets of searches and police — is evident in the raid that left Breonna Taylor dead in March 2020. The officers said they knocked before bursting into her apartment door, but most witnesses said they heard no knocking, and Taylor’s boyfriend believed they were getting broken into. He fired a shot that struck now-former LMPD sergeant Jonathan Mattingly once in the leg, and police returned fire, killing Taylor and spraying bullets into a neighboring apartment.

“The argument is not which types of search warrants are more dangerous, with all search warrants there is inherent danger as you are entering the domain of a criminal suspect, yet whether a suspect or evidence may be obtained without the execution of a search warrant,” Ruoff said.

Peter Kraska, a professor at Eastern Kentucky University’s School of Justice Studies, reckons there is something more that’s leading to the drastic shift in police practice.

While no-knock search warrants are banned in Louisville, officers can still use force to enter a premise after knocking and announcing their presence. But when the ban passed unanimously by the Louisville Metro Council after being championed by local activists, reformers and officials, it not only set a standard for how police can operate in Louisville — it set an expectation.

“They clearly got the message of the spirit of the law, and that was [to] stop doing that stuff,” Kraska said.

Military-styled raids on residential homes in the search for drugs are dangerous and they damage the public’s perception of the police department, Kraska said. They’re also often not very worthwhile, he said, even though police often lean on the practice.

Shields, who was hired by Mayor Greg Fischer in January, has indicated she wants the department to focus on violent crime reduction instead of narrowly targeting drug crimes. Of the publicly available residential search warrants filed with the Jefferson Circuit Court Clerk since May, just three related to a drug investigation.

There were 17 such search warrants filed with the clerk from the same three month-period  in 2019, according to a KyCIR review of public court records.

Chanelle Helm, a local activist and co-organizer of Black Lives Matter Louisville, said the drop in forced entries demonstrates that the pressure protesters put on police in the past year was a success.

“I don’t think without pressure that we would see this drastic decrease in forced entries,” she said. “LMPD is not interested in doing any type of work that calls for the relinquishing of their power.”

Last May, before the protests put police under the microscope in Louisville, officers used a battering ram to bust into the side door of a house in Portland, looking for drugs.

They found several grams of heroin, fentanyl strips, meth, and an assortment of pipes and scales, according to a search warrant filed with the court clerk. Two people were charged with drug trafficking crimes, according to court records.

By the end of that month, LMPD shuffled most of its force into working the protests. Nearly seven months would pass before LMPD officers would again use force to enter a home while executing a search warrant.

And now, most of the search warrant raids are conducted by a SWAT unit. The SWAT unit was utilized less than 20% of the time in the months prior to the protests. The officers who raided Breonna Taylor’s home were criticized for not deferring to a SWAT unit, which receives more specialized training on conducting a forced entry raid on a home.

Police have not altogether stopped forcing entry. On 30 occasions since May police made forced entries for an array of active emergencies — fights, domestic violence, suicides, overdoses and fires.

Once, in October 2020, just days before Halloween, Fourth Division officers were dispatched to a home on West Oak Street after someone called 911 to report a woman being assaulted. When the police arrived, they reportedly saw a woman banging on a window. It was dark outside and spitting rain, and the officers on scene busted in the front door in hopes of saving the woman.

As it would turn out, the officers found a realistic Halloween decoration.

In reviewing the incident, commanding officer Lieutenant Christopher Watkins noted the officers were acting with “the purest intentions” to save a life.

“The officers didn’t force entry and then search for narcotics or guns,”  Watkins wrote. ”Their search was for a suspect or potential victim.”

This type of police work — the quick response to save a life — should not be discouraged, said Keturah Herron, a policy strategist with the American Civil Liberties Union of Kentucky who was a leading proponent of the no-knock ban.

“It absolutely makes sense for police to go in when someone is in immediate danger,” she said.

However, police should always be ready to defer to a less intense and invasive response, Herron said.

“Police officers have more tools and tactics to use instead of automatically going in someone’s house, busting down their doors,” she said. “We have forced LMPD to use those different tools and tactics.”

That May 2020 raid in Portland yielded two arrests — a woman who has since had all charges dismissed, and a man who missed a pair of court dates last year and is now listed in court records as a fugitive.

Today, the house on the dead end street is littered with debris, the electrical box outside is stripped of precious metals and the door that police busted in more than a year ago is wide open.