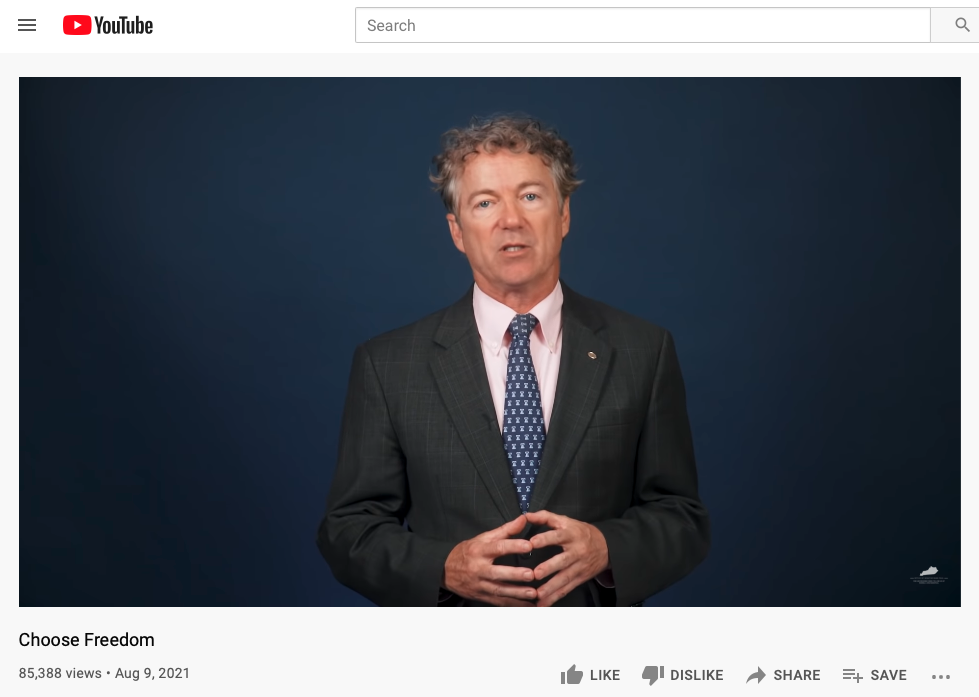 This is not the video that got YouTuber Rand Paul suspended, but it is equally as dumb.

COVID has taught us a lot of unfortunate lessons about society, but one of them is definitely that U.S. Sen. Rand Paul has even fewer brain cells than we previously thought. Throughout the entire pandemic, he’s been on a disinformation campaign, discrediting science and politicizing the virus, in what, at this point, seems pretty clearly all for his own gain, mainly using fear  to achieve reelection.

He’s shared dozens of, um, let’s say questionable, “articles” and “expert opinions” on various social media platforms, but YouTube apparently had enough of his shit and gave him a seven-day ban for, according to reporting by CNN, a post claiming masks are ineffective in stopping the spread of COVID.

“This resulted in a first strike on the channel, which means it can’t upload content for a week, per our longstanding three strikes policy,” a YouTube spokesperson told CNN. “We apply our policies consistently across the platform, regardless of speaker or political views, and we make exceptions for videos that have additional context such as countervailing views from local health authorities.”

Paul obviously chalked it up to “leftwing cretins” and called the suspension a “badge of honor.”

A badge of honor . . . leftwing cretins at Youtube banning me for 7 days for a video that quotes 2 peer reviewed articles saying cloth masks don’t work.

If you want to see the banned video go to Liberty Tree https://t.co/gsTUwuLZGL

YouTube, of course, has a past of being ground zero for far right-wing wormholes and recruiting, and a blackhole for conspiracy theories, and even though they’re starting to attempt to clean things up, it seems like you still have to spout some egregiously untrue things to get that ban.

But, you know, Rand has that kind of talent.