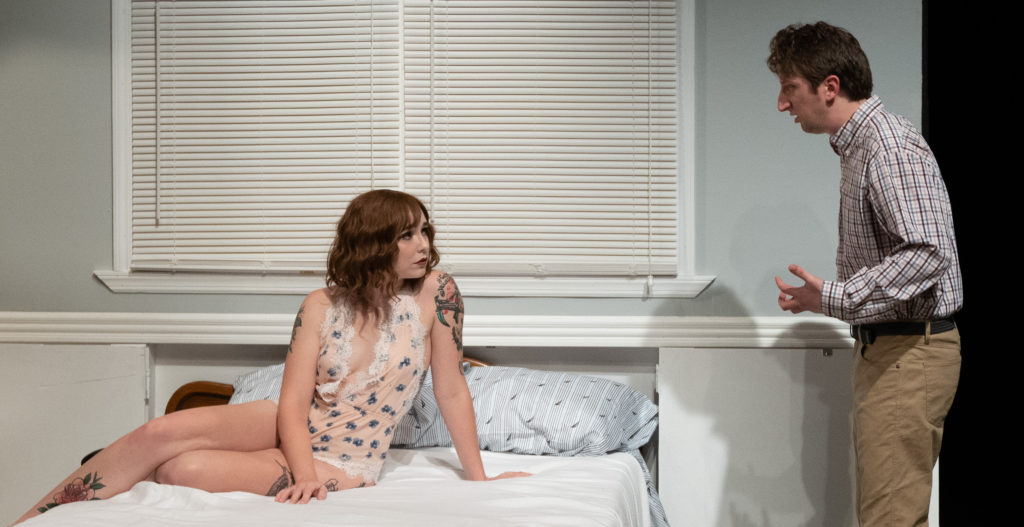 Back in the superficially innocent ‘50s and ‘60s, American screenwriters and playwrights created a spate of frothy pajama and pillowcase comedies. The scripts bubbled over with double entendres, sexy banter and gentle intergenerational conflicts that pitted healthy heterosexual cis-white teens against their stodgy elders. And it was all good, clean, belly-laughing fun.

A half-century later, the boundary lines around sexual course have shifted so much that it’s hard for a writer to write genuinely transgressive sexual comedy. Part of the genius of Sarah Page’s 2017 play “Punts,” which opened last weekend in a pitch-perfect Liminal Playhouse production, is that it bubbles over with such moments.

But even more brilliant is the way Page uses all those punchlines to open the door to a more powerful and provocative punch in the kind of ending that will leave audiences uplifted and unsettled and with plenty to think about.

The premise of “Punts” is simple but surprising.  A successful, middle-aged couple, Antonia (Teresa Willis) and Alastair (Brian Hinds) have a twenty-something son named Jack (Wes Yunker) whose IQ tests run low and whose social behavior resembles Asperger syndrome: He has anxiety when meeting new people and difficulty interpreting nonverbal communication. Some weeks before the action of the play, one of Jack’s younger brothers got married – and did not invite Jack to the stag party. That event triggered a deep distress for Jack and his parents around the fear that unlike his brothers and the fellows on his rugby squad, Jack will never experience the sexual “rites of passage.”

And so it is that Antonia and Alastair become punters (a multi-purpose English slang word that, among other things, applies to people who hire sex workers).  After exercising due diligence – checking online reviews and vetting candidates – they select Julia (Sloane Malone).

Since its inception, Liminal Playhouse, founded by Artistic Director Tony Prince and Producing Director Richard McGrew, has staked out a two-fold approach to programming. Their seasons are weighted toward Louisville premieres of edgy, unsettling, contemporary scripts. And they are, I think, unique in producing contemporary works by British playwrights who are woefully underrepresented in American theaters at large, and vanishingly rare on Louisville stages.  This production – a U.S. premiere that was slated to run just prior to the pandemic and has been on hold with the cast and crew intact – hits both of those notes. And my guess is that most of the Saturday night audience – all masked throughout – may have been a bit cautious about returning to a theater space.

Still, even through masks, it was impossible not to laugh and gasp at the cool, understated wit and frankness the performers bring to the set up for Julia’s visit. For instance, as the play opens, Jack’s mother asks him, “Did you wash your…” Then reminds him that she has instructed him about “rolling back the end bit and …

Moments later when Jack reports to his mother that by way of preparation he and his father have watched what Antonia calls a piece of “female-friendly pornography,” he tells his mother that his father had enjoyed the film more than he, and had described one scene as “eye-opening” – a quote that will surface later when Antonia quizzes her husband about the film. The fun continues when Jack asks his mother how to breathe while French kissing. But then, when Jack innocently asks his mother about “fisting” – a word he’s heard on the rugby pitch – we know we’ve come a long way from the glossy world of Doris Day – and that Antonia is a wonderfully calm and collected parent who has long since learned not to be dismayed by anything.

Julia’s arrival and first meeting Alastair (Antonia leaves the house for the evening) plays like a miniature comedy of manners – you could imagine Oscar Wilde writing a scene like this, where Alastair feigns normality, offering the sex worker a choice of teas and inviting her to take off her sopping raincoat – until she tells him that she’s wearing nothing beneath it except a negligee. And in that scene, we learn that Julia has a sense of agency, that she volunteers at a charity that works on behalf of ex-service personnel, and that many of her clients are veterans with grievous disabilities, both physical and psychological.

A cynic might view this as a variation on the conventional “whore with a heart of gold” trope, but it didn’t feel that way to me – and that I attribute to an extraordinarily thoughtful script, superbly restrained direction from Tony Prince, and disciplined performances from a cast that lets the script speak for itself.

And it’s a script that does. The wit and humor of the opening scenes eventually explodes in a furious series of events and external forces that tear at the deep compassion and empathy that’s at the heart of this story. And as the ground shifts, Hinds, Malone, Willis, and Yunker tumble over it with grace, courage, and conviction.

“Punts” is one of those rare plays that melds a blithe comic spirit with a serious purpose. It never feels didactic, but it’s hard to imagine anyone walking away from the theater without having much to think about.