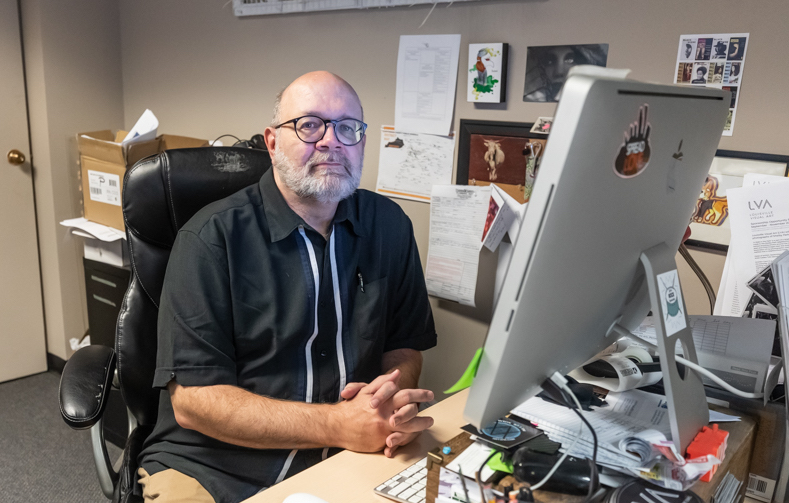 Keith Waits is the editor-in-chief of Arts-Louisville.com and operations manager for Louisville Visual Art.

Passion, enthusiasm and a deep love of creative expression are a common thread driving local arts writers — especially when breathing life into a seemingly stagnant art scene brought on by the global COVID pandemic and subsequent shutdown.

Below, LEO profiles a few of the writers and outlets that cover Kentucky’s thriving arts community, many who found creative ways to cover and promote the arts when galleries and theaters went dark.

“I am very grateful that my hometown of Louisville has such a thriving arts community. I have been so humbled by the resilience it has shown over the past 18 months, and I am confident the best is yet to come.” — Amy Higgs

Amy Higgs is a freelance writer and media consultant for companies and nonprofits in a variety of industries — with a heavy focus and passion for the arts. One of her largest contract roles is serving as managing editor for Audience, a publishing group that produces playbills for PNC Broadway in Louisville, Louisville Orchestra, Kentucky Performing Arts, Kentucky Shakespeare Festival and additional performance groups.

When performing arts venues shut down due to the COVID pandemic, Audience Magazine (launched April 2020) — a free monthly digital magazine available to arts lovers in Louisville and beyond — was born.

“When stages went dark, we wanted to give local arts groups a platform to share their stories, their struggles and their triumphs during this incredibly challenging time,” said Higgs. “Now that performances have resumed, we plan to continue to publish the magazine and serve as an advocate for the performing arts, and we’re excited to resume publication of our playbills as well.”

Higgs fell in love with theater as a little girl, when her mother took her to Whitney Hall to see the musical “Big River.”

“I remember being glued to my seat, completely enthralled by the music and the story,” said Higgs. “I passed that love on to my son, Ethan, 26, who is happy to be my date to the theater, movies, concerts and comedy shows. Some of our favorite Broadway shows are ‘Lion King,’ ‘Book of Mormon,’ ‘Jesus Christ Superstar’ and, of course, ‘Hamilton.’” 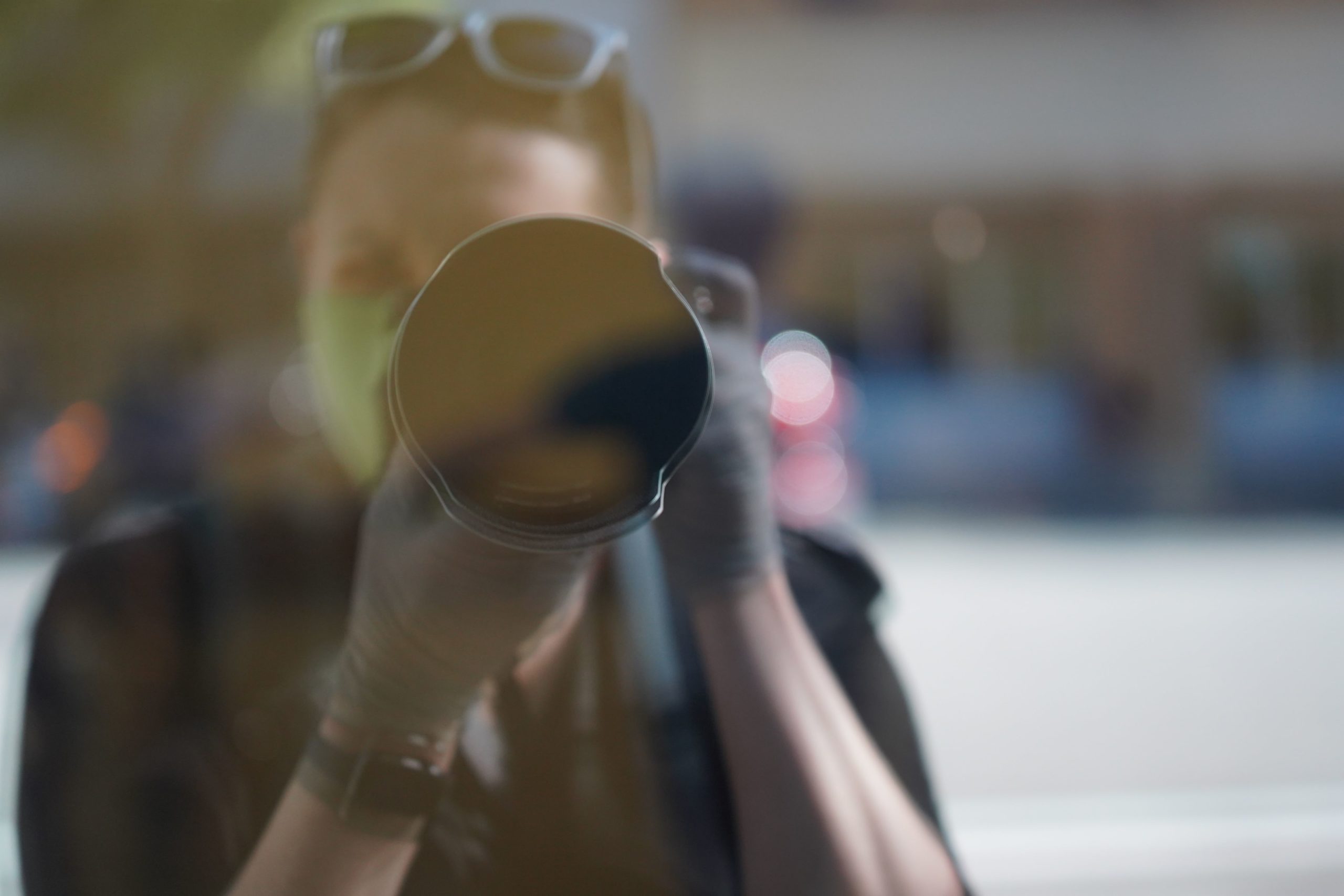 “In my first year in Louisville, I saw drive-in-style theater, watched online programming with my family, toured an art exhibition via virtual reality, spoke with several muralists from six feet or more away, and met many artists out on the streets of Louisville, as they demanded racial and social justice. I’ve been struck by how much art and culture this city has to offer, and by the artists working to make the arts scene in the region better and more equitable.” —Stephanie Wolf

Public radio arts and culture reporter Stephanie Wolf moved to Louisville in March 2020 — about a week after nearly everything in the city shut down due to the COVID-19 pandemic.

“It was a strange time to adjust to a new city and new job, and learning about the local arts scene predominantly via Zoom felt like a mountain of a task,” Wolf said. “But it was incredible to watch how quickly people involved in the arts here pivoted. Louisville artists didn’t seem to hesitate in figuring out the best way to put their art online or move it to outdoor, socially distanced venues.”

Growing up in Atlanta, Wolf was immersed in the arts and largely influenced by her mother, a visual artist and art teacher. Her parents also owned a miniatures store.

“As far back as I can remember, they encouraged me to be curious and engage in creative activities. That included taking dance classes, which grew from a once-a-week hobby to spending all of my teenage years in a dance studio and eventually to a 12-year professional performing career with ballet and opera companies,” said Wolf.

While living and dancing in New York City 11 years ago, Wolf completed her undergraduate degree and was encouraged by an English teacher to pursue a career in writing.

The seed was planted; Wolfe began freelancing about dance and art, interned for Manhattan Media and later worked briefly as a copywriter for Lincoln Center.

In 2012, she moved to Denver to dance for Wonderbound, formerly Ballet Nouveau Colorado — but broke her leg about a month into the performance season.

“After a lot of rehabilitation, it became clear that my dancing career was over,” said Wolf. “I decided to try to transition fully to journalism. I believe arts and culture deserves just as rigorous reporting as any other beat, which means investigating the issues impacting the sector and holding those in power accountable, as well as telling the stories of the artists who hold up a mirror to society.”

Regarding her passion for radio, “I love audio as a medium,” said Wolf.

“First, there’s the power of the human voice,” Wolf said. “Audio allows people to have their literal voice in a story. You can hear their emotion and passion in a way that I don’t think I could do justice to in the written word. I also think it’s a medium that can transport people. By layering the different sounds I record while I’m reporting in the field, I can recreate what I observed and hopefully people will feel as if they were there too. I think that can help build more empathy or understanding about a subject.”

In addition to radio journalism, Wolf is also editor of Arts, Culture, Etc., a biweekly newsletter from Louisville Public Media covering the latest cultural news and events throughout the region.

“I love the sense of discovery that comes with encountering each new work, and the way creative people can surprise us with the classics. Louisville and the surrounding area is a fertile location for artists, so there never seems to be a lack of subjects.” —Keith Waits

Keith Waits, editor-in-chief of Arts-Louisville.com and operations manager for Louisville Visual Art, has worked as an arts writer for 14 years.

“After watching all manner of arts all my life, I kind of backed into reviewing theater at the encouragement of friends: first through Theatre Louisville and eventually launching a new website, Arts-Louisville.com (originally with Scott Dowd, who pursued other things). All of the writing for Arts-Louisville is done on a volunteer basis, but we are a 501(c)(3) nonprofit — and I hope to change that,” said Waits.

“As part of my work at Louisville Visual Art, I have written extensively about local visual artists,” said Waits, who writes the organization’s art blog, Artebella. “I also interview artists for LVA’s Artebella on the Radio, which airs on WXOX 97.1 FM/Artxfm.com Thursdays at 10 am.”

“I think Louisville is such an interesting art community in that it’s such a welcoming environment and hospitable for younger artists to get a foothold. So often we’re able to see these exhibits and artists being uplifted by curators, gallerists and exhibits that are not being uplifted in a traditional way. It’s part of the draw in covering it through writing and Ruckus” —Kevin M. Warth

Formed in 2018, Ruckus is a nonprofit art journal covering the South and Midwest. It began in Louisville, expanded throughout Kentucky, and grew in reach and scope during the four years the publication has been in circulation.

Compared to what the team sees covered locally, the goal of Ruckus is to lean heavier into in-depth exploration of exhibits and artists in its content. It offers long-form interviews, critiques and opinion-based pieces. The goal of Ruckus is to create a more robust landscape to fill the gaps in exhibition and major arts coverage.

“There were smaller exhibits happening that just weren’t getting written about; my co-editors and I came together to discuss what was interesting or exciting,” said Warth, a practicing artist and New Albany, Indiana native with a degree in art history.

“Having that background, I am by no means a journalist,  but how I think about art and talk about art informed my approach to Ruckus,” said Warth. “We want to hear from everybody and have an open forum for conversation. People — despite not going to art school — have a lot to say about arts and can relate to a particular artist telling parts of a lived experience.”

“We wanted to do our part to encourage, support and sustain the kind of arts community that we want to live in. It’s one thing to want it, another to help make it happen.” —Christine Huskisson

UnderMain, a digital arts and culture magazine covering Kentucky and surrounding regions, was started in 2014 by co-editors Christine Huskisson, Tom Martin and Arthur Shechet. Its in-depth features highlight creative work from the region’s artists in the visual, performing, and literary arts in all their varied forms, including work being produced in parts of our communities underrepresented in arts and culture coverage in mainstream media and cultural publications.

In 2016, UnderMain transitioned to 501(c)(3) nonprofit. The publication received funding by the Great Meadows Foundation, which it dedicated to its Studio Visit Series (launched in 2018), critical reviews of area art shows and Critical Mass Symposium.

“We have worked with more than 50 writers since our inception, and supporting them is key for the three of us as well,” said Huskisson.

Volunteer editor Bobbie Newman and designer Patric King — currently working on the magazine’s new website — round out the team. Undermain is also now working with a Chicago-based firm, House of Pretty.

“UnderMain is in the process of emerging from a blog and labor of love, to a full-blown digital magazine devoted to in-depth, quality coverage of the arts in the Ohio Valley region and even beyond,” said Huskisson.