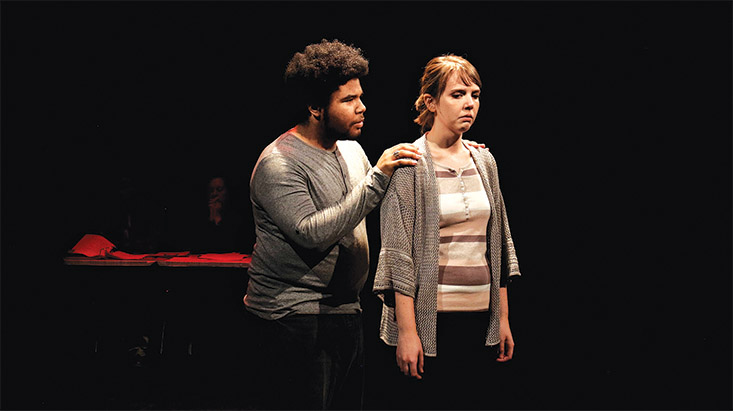 Kéleb Beauchamp and Meghan Holland in ‘NOTE’ by Allie Fireel, a 2019 Looking For Lilith production. | Photo by Holly Stone, LFL

Kicking off its 20th anniversary season on Sept. 18, Looking for Lilith Theatre Co. will gather with their audience on the steps of the Kentucky Center for the Performing Arts and walk through the doors of the venue for a one-night only event. There will be drinks and hors d’oeuvres. This “performance-based party” will include readings from their last two decades.

In the month of November, the group will explore virtual and live performance. Throughout the last year, their members have conducted what they call story circles and also created digital responses to the last year. These performances will have a two-week stint at the MeX theater at the Kentucky Center for Performing Arts in the early part of the month.

In January, the group will unveil “Mac’s World,” a piece about bullying, and in April will cap their season with “The Ancestry Project.” This story takes on the experiences of marginalized, female-identified people spanning generations.

In addition to their shows, the group’s teaching artists will be active in schools across Louisville.

The company will offer GirlSpeak and YouthSpeak programming for middle and high school students that allow young people to share their stories in a theatrical format.

Tickets and more information can be found at their website: https://lookingforlilith.org/.