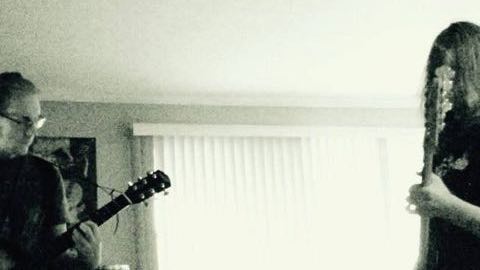 London Missile, a self-proclaimed electro-pop duo, is really nothing more than an “experiment” according to its members Joshua Spicer and Chris Gunter. Or, at least, that’s how it started. But with the release of “K2,” a song from the Louisville band’s latest release, Bad Sines For The Future, one could easily say the experiment was a successful endeavor. And while the duo said the song was written before the pandemic, “K2″‘s themes are just as relevant now, if not more so.

“I feel as if the song and lyrics represent this feeling of complacency in life,” Gunter said. “The self-awareness of existing near other people and participating in relationships while also being completely isolated within yourself.  If you watch the the video for ‘K2’ it compounds this theme against this apocalyptic imagery to demonstrate this idea that isolation is inherent to the human experience.”

Spicer agreed with Gunter’s sentiment: “A few years earlier, I was diagnosed with pretty serious carpal tunnel, and it became apparent that I wasn’t going to be able to play bass anymore. I had based, not only my music, but a lot of my relationships with other people, on being able to physically play music and when I couldn’t anymore, it changed the way a lot of my friends and I hung out, and it, honestly, felt like very few of them understood. I really wanted to channel those feelings of loss, anger and self-imposed isolation in some way and this song felt like a good place to start.”

“K2” is smooth electro-pop at its finest, airy yet sonically focused. The song opens with a peaceful, atmospheric glitch that persists throughout yet is often punctuated with other digital bells and whistles building into a much grander symphony of sounds. Meanwhile, Spicer’s ethereal vocals melt through the song — his soft, lullabye timbre building with the dream-like chorus behind him.

“I really wanted to go big on the vocal work,” Spicer said. “sBACH and Gorillaz were major influences for me when writing this track. I really liked the idea of fat, backing harmonies layered with cool falsetto stuff, like Nnamdi Ogbonnaya or Do Make Say Think paired with soft, kind of shy-sounding lead parts like Neon Indian or David Pajo. These ideas seemed like a lot of fun to me and I didn’t really see anybody else doing anything like it which was additionally appealing.”

And while “K2,” and the accompanying album, was a work in progress for over four years, a length of time compounded by the pandemic, Gunter views these not as problems but defining experiences.

“There were periods where we were dealing with our own personal issues and couldn’t necessarily put the time and effort into music that we once were able to,” Gunter said. “However, I do believe those experiences and expressions come out in this album compounding to create a sound that at least for me, I’m extremely proud of.”