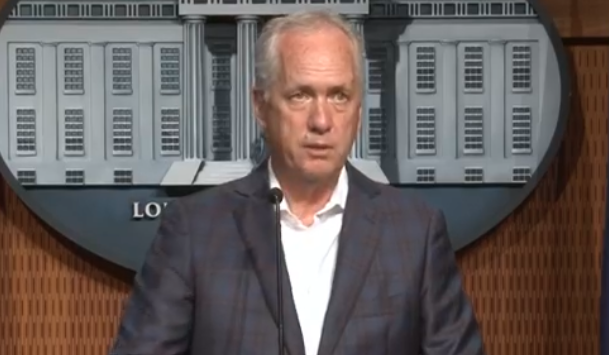 The “primary” areas are homelessness and affordable housing, workforce development and small business support, public health and public safety. The city also plans to fund premium pay for “critical” government workers and to hold over funds for additional COVID mitigation and prevention “if necessary,” said Fischer at a Monday press conference.

“The focus area and open issues I’ve just outlined reflect discussions between us, my office and the council, in our agreement that while our city has many needs, the areas that I’ve just mentioned reflect the most effective inclusive and equitable way to allocate our ARP funds given requirements set forth by the federal government,” he said.

The city’s areas of focus mostly align with what the public asked for in a Metro Council survey. The top four areas chosen by the public were affordable and government-supported housing, public health, childcare/early childhood education and public safety in that order. Economic and workforce development ranked seventh out of nine categories that the public could have picked from. Fischer said that the city’s planned focus on public health will involve improving access to child care. The state government also plans to allocate child care funding to Louisville.

The federal government stipulated that cities like Louisvilles should spend their ARP funds on initiatives and programs that respond to the economic and public health impacts of COVID-19, Fischer said.

The city’s focus areas may change as decisions are made in other areas of government. On the federal level, Congress is still considering an infrastructure bill that may be relevant to how Louisville allocates its ARP funds.

Fischer said “a good amount” of Louisville’s ARP funds will go to affordable housing, including transitional and permanent, supportive housing, particularly for those who are low income and who struggle with mental health and substance use disorders.

With workforce development, the city needs to “competitively reposition” for a digital economy and job openings already in the community by investing in its workforce, said Fischer. He advocated for addressing racial equity in several of the city’s chosen focus areas, including the economy, which he said needs to encourage Black and brown businesses and workers. Fischer also said access to broadband internet would be a part of the city’s workforce development strategy for ARP funds.

To improve public safety, the city plans to invest in violence prevention and intervention and deflection and diversion programs, as well as new policing technology.

“Because, as we’ve said, some situations should involve a social service response rather than solely law enforcement, particularly when dealing with people struggling with homelessness, mental health challenges, or substance use,” said Fischer.

The premium pay for government employees that the city wants to spend money on would likely be for those in the public health, safety and sanitation sectors.

“Many of your city government employees have risen to the occasion of serving our city with great distinction during the depths of the steps for the pandemic,” Fischer said.

The next step for the ARP funds is for Metro Council to meet, review and amend Fischer’s suggested focus areas.

“Our goal has been to use local fiscal recovery funds in sustainable ways to make long lasting change,” he said.

After the council approves its resolution, Fischer’s office will work with community partners, which will prepare proposals to request the funding. The council will then approve specific, ARP-funded projects.

Fischer predicted that it will take until the latter part of 2021 to complete the ARP fund process.