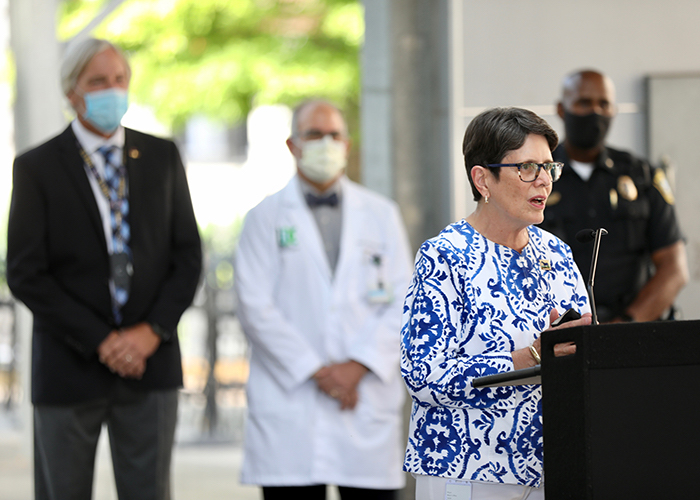 Lexington, Kentucky, has hit a significant vaccination milestone: 70% of its population, ages 18 and up, is fully vaccinated.

That’s probably more than in Louisville. Of that same age group, 72.8% of Jefferson County residents have only received one vaccine dose. (A spokesperson for the Metro Department of Public Health & Wellness, Kathy Turner said the department doesn’t have data for how many people 18+ in Louisville are fully vaccinated.)

Oh, 52.1% of people in Jefferson County are fully vaccinated?

You think 59.9% of people receiving at least one dose of a vaccine in Louisville is cool?

Psh, 69.4% of Lexington’s residents have had at least one jab.

Lexington’s Mayor Linda Gorton lorded her city’s accomplishment over Louisville at a press conference yesterday (OK, so she didn’t even mention us, but she was pleased with Lexington’s stats.)

“We’ve asked a lot of our citizens and they have responded. As of today 70% of our citizens, age 18 and over, are fully vaccinated. That’s a great accomplishment,” she said.

None of this is surprising if you’ve been paying attention to the state’s COVID data.

Fayette County is the third most vaccinated in the state, behind Woodford and Franklin.

Jefferson isn’t even in the top five.

In our opinion, the vaccination race is the most important competition that our two cities are engaged in. Sure, UofL vs. UK is a big deal. But we can’t control which team is going to do better year from year. This is up to we the people — not a basketball coach or players.