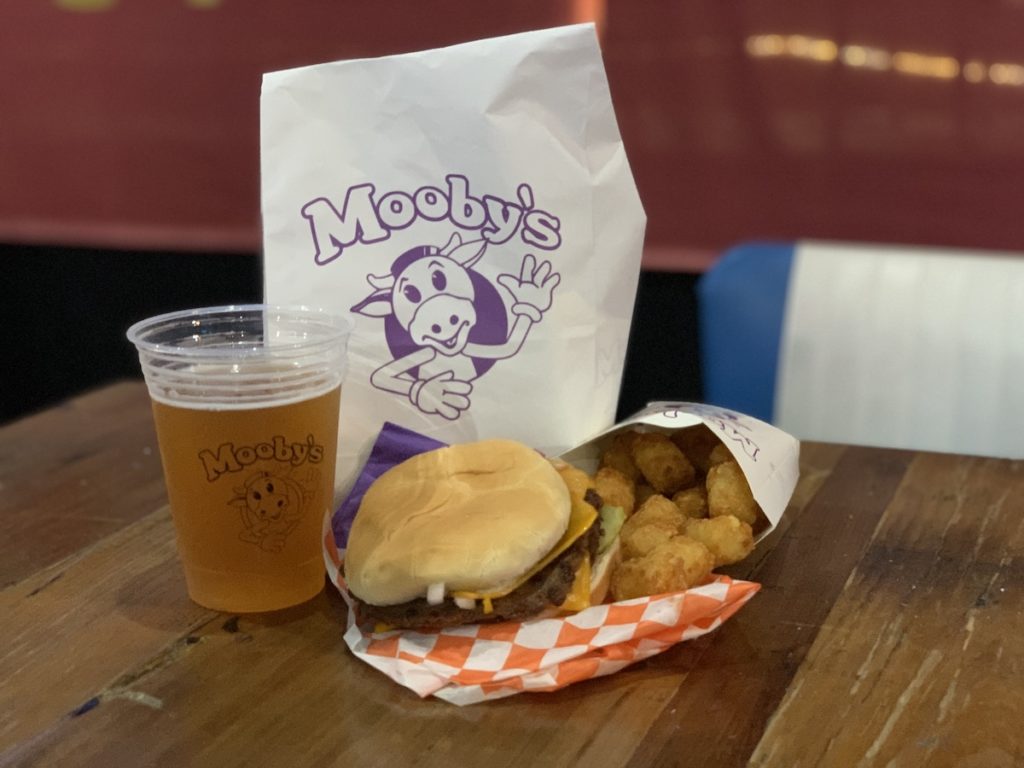 Beer and a burger at Mooby’s, the Kevin Smith pop-up in Louisville, open through Aug. 10. | Photos by Tarah Chieffi

I wanted to open this review with a clever quip from one of multi-hyphenate filmmaker Kevin Smith’s clever films, but there are simply too many to choose from. Such is the genius of Smith for longtime fans such as myself. I may or may not have yelped in excitement upon learning Mooby’s, the fictional fast-food joint featured in many of Smith’s films, would be coming to life through a pop-up dining experience right here in Louisville at Tin Roof, located at 3921 Shelbyville Road in St. Matthews.

Mooby’s appeared in 1999’s “Dogma” and 2001’s “Jay and Silent Bob Strike Back,” but is best known as the primary filming location for “Clerks II.” To bring Mooby’s from the big screen to the real world, Smith partnered with pop culture pop-up veteran Derek Berry, the mastermind behind similarly nostalgic pop-ups based on “Saved By the Bell,” “Beverly Hills, 90210,” and “Good Burger.”

“Kevin always wanted to do a Mooby’s pop-up,” Berry told LEO, “but when the pandemic hit, we weren’t sure how to do it. When indoor dining was shut down in 2020, the first Mooby’s was a delivery-only partnership with Postmates. As restrictions loosened, Mooby’s began a North American tour, most recently stopping in Detroit and Toronto.”

To manage demand, pre-paid reservations are required to visit Mooby’s. Reservations are $29 per person, which includes a main dish and a side. Additional items, including desserts, sodas, CBD seltzers, cocktails and custom craft brews can be tacked on for an additional fee. 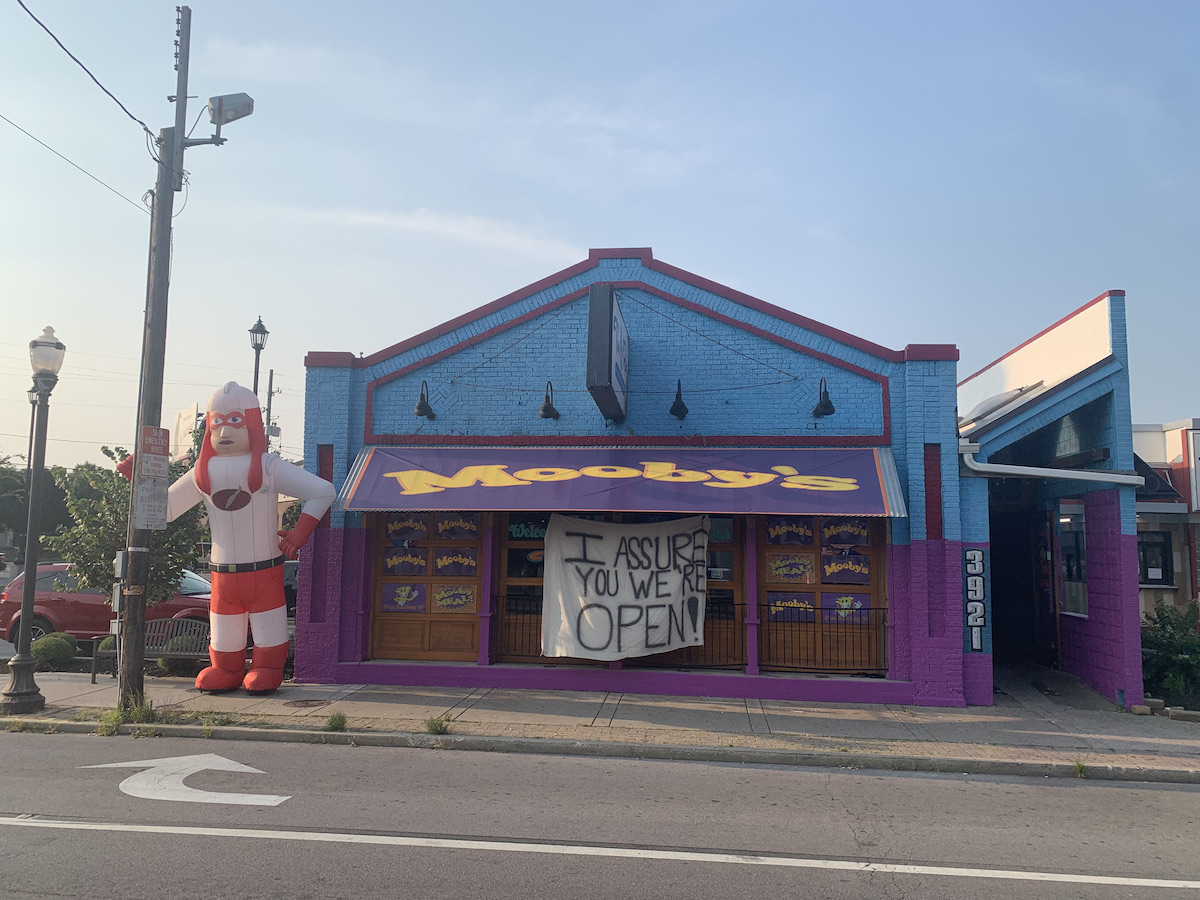 Virtual reservation in hand, my husband, Kevin, and I made our way to Mooby’s on opening night. We knew we had found the right place when we spied the giant Chronic (half of the Bluntman and Chronic superhero duo) inflatable figure and a white tarp messily spray-painted with the words “I Assure You We’re Open!” hanging from the front windows.

We gave our name to the hostess and were directed to the bar to pick up our food. The bar area had been decked out to resemble a fast-food pick-up counter, complete with Mooby’s branded food packaging, employee of the month plaques, and a sign on the cash register declaring, “If you plan to shoplift, let us know.” Even the servers wore purple Mooby’s T-shirts emblazoned with the restaurant’s eponymous mascot, a fun-loving golden cow.

While we waited a short five minutes or so for our food to be prepared, we wandered the restaurant in search of the full Mooby’s experience. We found even more Mooby’s signage, a merch table (where I picked up a sticker for my laptop) and a large banner adorned with Mooby’s slogan, “I’m Eating It.”

When my name was called over the intercom (just like in the movies!), we picked up our Mooby’s bags and draft beers and found a table. To be honest, I wasn’t expecting much from the food. I wasn’t there for the food. I was there to pretend I had enough talent to appear as a background actor in one of Smith’s films. So I was happily surprised when my Cow Tipper burger was juicy and flavorful with plenty of fixins, and my Onion Rings To Rule Them All were perfectly crisp. While cleverly named, I wasn’t as big of a fan of the Hater Totz as I was the onion rings.

To show my support for Smith’s veganism (which he adopted after a massive heart attack in 2018), I also ordered a Beyond Cowtipper made with two Beyond plant-based patties in lieu of beef. The patties on their own weren’t as tempting as their carnivorous counterparts, but when layered with cheese, mustard, pickles, onion and Mooby’s sauce, the vegan burger was a totally acceptable substitution.

Knowing Mooby’s had partnered with the local craft brewery Falls City Beer, I was especially excited to sample the Mooby’s “I Assure You We’re Open” Golden Ale. Berry told us, “In every city, we work with a different brewery to do a specialty beer for the event.” This blonde ale was brewed and packaged by Falls City exclusively for Mooby’s.

After tasting it, I can assure you that it’s light, smooth and delicious. We even snatched up a couple six-packs to bring home. At $30 a pop, it’s probably the most expensive six-pack I’ll ever purchase, but you only live once, and you can’t take it with you and all that.

Before leaving, my husband snapped my pic with a life-size cardboard cutout of Jay and Silent Bob for posterity. All in all, if you fall anywhere on the Kevin Smith fandom spectrum, Mooby’s is well worth a visit.

Mooby’s ends its Louisville run on Aug. 10 and most dates are still available for reservations at moobyspopup.com.