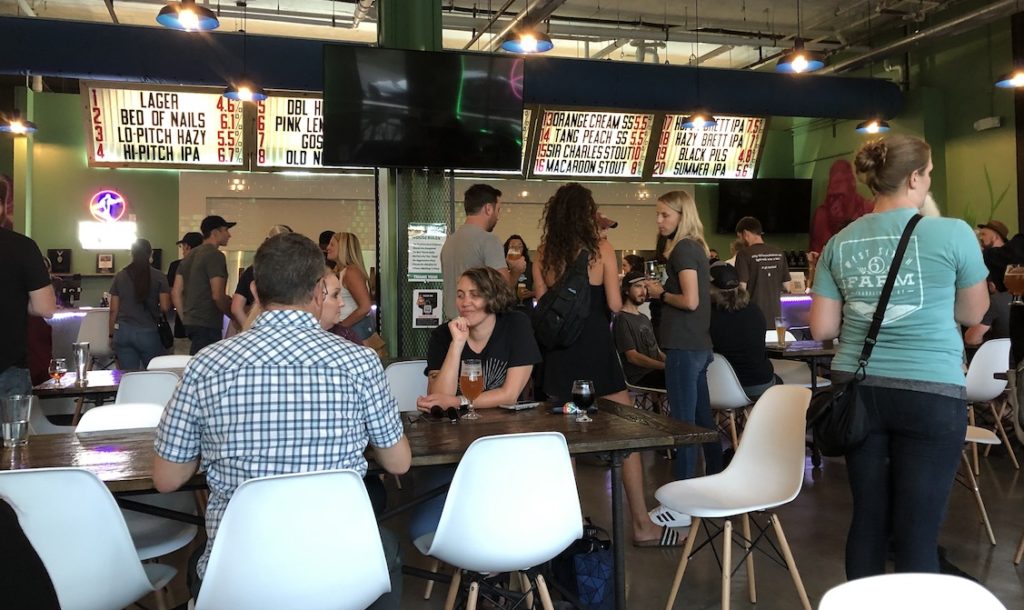 The inside of Hi-Wire Brewing's new Louisville location. | Photos by Scott Recker

The brewery scene in Louisville has grown substantially in the last decade, and although it’s been mostly local and organic startups, craft beer is now big business, and with big business comes expansion. Enter a well-known company from another state, Hi-Wire Brewing, which is based in Asheville, North Carolina, and already has a few additional locations in nearby cities.

On Thursday, Hi-Wire Brewing opens a taproom in a street-level storefront below The Baxter Apartments at 642 Baxter Ave.

LEO attended a soft opening of the new brewery on Wednesday, and here are a few takeaways:

The space is a lot bigger than you would expect from the outside.

It might seem like a small taproom if you’ve just driving by, but the 5,500-square foot location is anything but. Filling the middle of the building are several beerhall-style tables, with smaller tables on the edges, and narrow, street-facing seating along the windows. There’s a large bar, a small gift shop and games along the wall, with plenty of space to still move around and linger.

It’s a win for The Baxter Apartments development.

There hasn’t been a whole lot of bites from businesses on the storefronts under The Baxter Apartments so far, but a brewery fits in nicely, connecting a bit of dead space in a heavily-trafficked corridor.

There’s a lot of space dedicated to games.

The brewery has soccer pool, table tennis, foosball and shuffleboard, all of which are set up along the far walls, out of the way of the bar and tables. They’ve done a nice job of maximizing the building, and making it feel like more than a place where you just sit and drink.

There are currently 20 Hi-Wire beers on tap, spanning a range of styles and flavors.

We tried the three lagers — the flagship Hi-Wire Lager, the Old North Lager and the Honey Lager — all of which were crisp and refreshing, with the right balance of flavor and drinkability. Something breweries are doing a lot better a job of these days ia leaning into having multiple light options and not just a full board of mind-numbing ABV giants. That said, we also tried a few options on the bigger and more complexly-flavored side, including the rock solid Hi-Pitch Mosaic IPA, which is already heavily distributed in the area. It checks out as a smooth, perfectly balanced, hop-forward beer that’s tropical and complex, yet not overwhelming. Before leaving, we also grabbed an Orange Cream Session Sour, which was a lot more accessible than anticipated. We were expecting a sharp and rich dessert, but instead got something that featured careful and subtle flavors that added up to something incredibly refreshing and highly recommended.

For a look at the initial tap menu, go here.