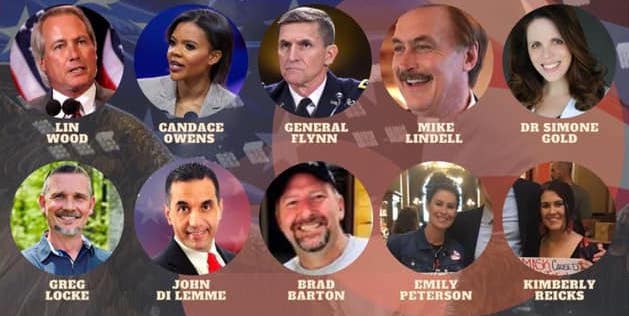 A truly harrowing lineup of conservative conspiracy theorists are scheduled for “the biggest patriot rally of the year” in Greenville, Kentucky from Sept. 10-Sept. 11.

My Pillow magnate Mike Lindell is on the roster, as well as Trump-fanboy lawyer Lin Wood and former General Mike Flynn, according to a post on the Muhlenburg County Agriculture & Convention Center’s Facebook page.

These speakers are known for promoting the conspiracy theory that the 2020 presidential election was stolen from Donald Trump. President Joe Biden won the race with over 81 million votes, with no evidence of widespread voter fraud.

Candace Owens is also on the lineup, as well as six other speakers. “Artists” will also be performing.

Tickets for the event are a whopping $250 for general admission. If you want the VIP treatment, you’ll have to shell out $500 — for the every-man, of course.

On July 1, Muhlenburg County magistrates voted 4-1 to approve the event, citing the importance of honoring freedom of speech, according to WEHT news.

WEHT also reported that conservative Brad Barton is hosting. According to his Facebook page, Barton is a “truth teller” who lives in Chattanooga, Tennessee.