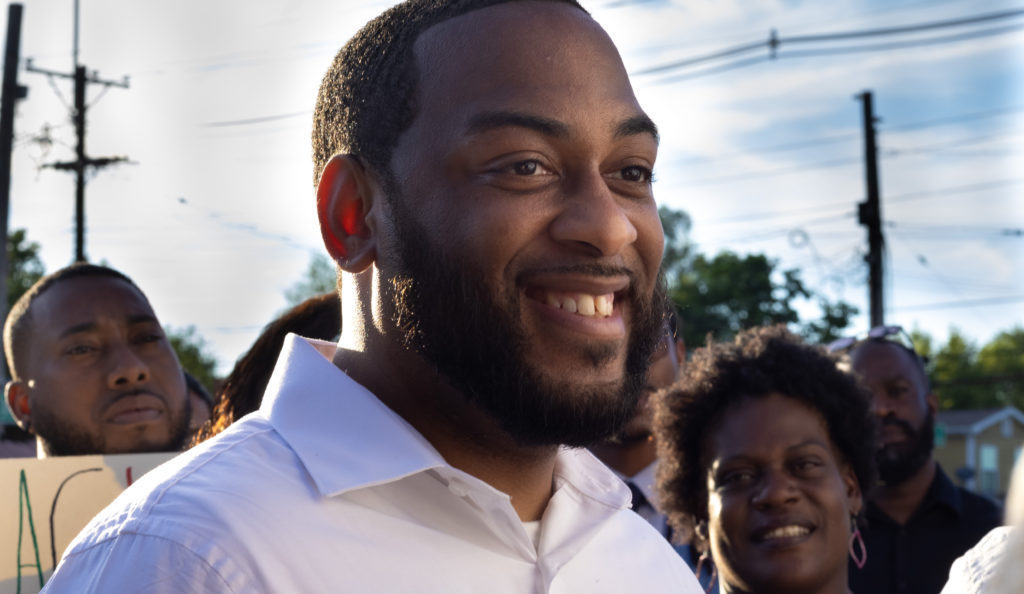 Last week, Charles Booker announced that he will once again run for U.S. Senate, this time challenging the seat of incumbent Rand Paul. In a 2020 Democratic primary, Booker lost to Amy McGrath (who eventually failed to unseat Senate Minority Leader Mitch McConnell) but the 37-year-old became a rising political star in the process through his progressive policies and grassroots actions. LEO recently caught up with Booker. This interview has been edited for length.

LEO: In the 2020 primary against Amy McGrath, you gained a lot of momentum quickly and almost pulled off an upset. Through your visibility and speeches at the protests, your direct, progressive beliefs and your calls for unity, you seemed to energize and excite a lot of people. How do you plan to carry over that momentum against Rand Paul?
Charles Booker: For me, making this decision to run, in what ultimately will be the last term in office for Rand Paul, isn’t about carrying over the momentum, it’s about honoring it. It’s there, and it was always there. The people of Kentucky have always been demanding things to be better, and have always been the type of folks that will work hard in the face of adversity, will come together when times are rough — that’s been the Kentucky I’ve known my whole life. Just being able to shine a light on that truth in this previous run was really important, but this is about being accountable to it. The most important thing that we need to do now is tell the story of Kentuckians who see our common bonds, from the hood to the holler, and everywhere in-between. And a Commonwealth of folks who are ready to deal with the deep issues that we face, so that we can heal and progress and surpass our dreams.

I have a two-part question about the protests. How did they inspire and impact you as a person and a politician? And how do we individually and politically continue to advance social and racial justice in Kentucky?
Two really good questions. I’ve been a part of a lot of community organizing efforts, regularly go to neighborhood association meetings, would go to the council meetings, go to the state legislature before I was a staffer, before I was a legislator. I would also stand with the community in the streets when they need me. I would also stand with organized labor on the picket line. So, it does really come from a place of understanding the urgency of us activating collective power and the urgency of being responsive to the people. When that moment happened last year, it was really one of those times where I had to stand like I always did. It wasn’t new for me, but politically speaking, I’d imagine there would be a lot of reasons for a politician to not get involved, but I’m not a typical politician. So, it really allowed me to stand in my truth as a Kentuckian, as someone who is committed to fighting for real change, not just playing politics. And the whole country had a chance to see the platform that I was lifting up wasn’t radical, it is actually what we need to meet the moment. It was reaffirming that we can come together. What you saw in those protests were folks from all over the place. From all walks of life. All parts of Kentucky…I think the way that we continue to be accountable to regular folks, how we continue to lead on addressing structural racism and really get to these issues at a deeper level that allows poverty to be generational and inequity to be so pervasive, is to lift up the voices of the people from the forgotten places. The folks that get ignored, which is the majority of Kentuckians. I want to lead by example in this Senate run to show when we lift up the voices of regular folks, and when regular people lead ourselves, change can happen.

In terms of political ideology, you and Rand are extremely far apart. Him being a right-wing obstructionist, and you calling for things like universal health care and the Green New Deal, which are more progressive. What is it that you think makes him susceptible to losing and makes your positions more magnetic to Kentuckians?
The main reason why not only is he susceptible to losing, he will lose, is he doesn’t see the people of Kentucky. Nor does he care about the people of Kentucky. And it’s very obvious. The people of Kentucky see it. Democrats, Republicans, Libertarians, everyone sees he is a joke. All we ever needed — and all we need — to meet this moment in our politics are folks that have there courage to speak the truth, and to show love, and to go to those places that have been ignored and left behind. Speak to those folks and lift up the voices who have been ignored, abandoned and forgotten about. My platform is really a response to growing up in Kentucky, living in what, for years, has been one of the poorest zip codes in the state, seeing a lot of these challenges up close. These are things that Rand Paul doesn’t know anything about. Rationing insulin, having your license cut off, not having a place to stay, working multiple jobs just to barely get by. Rand Paul doesn’t know anything about that stuff.

Your slogan is “from the hood to the holler,” which ties into your goal of building pathways to wealth all over Kentucky — how do you envision that being accomplished?
There’s a reason that I anchor my platform around these structural pieces of legislation — to make sure that everyone has healthcare. That’s an economic policy as much as a healthcare policy. The Green New Deal, which I’m going to roll out in this campaign, a vision for our future, I’m calling it a Kentucky New Deal, which speaks to our sustainable economy, which speaks to opportunity across Kentucky, which speaks to addressing our infrastructure like broadband, which is a utility, and making sure folks across Kentucky are being invested in instead of being ignored. •