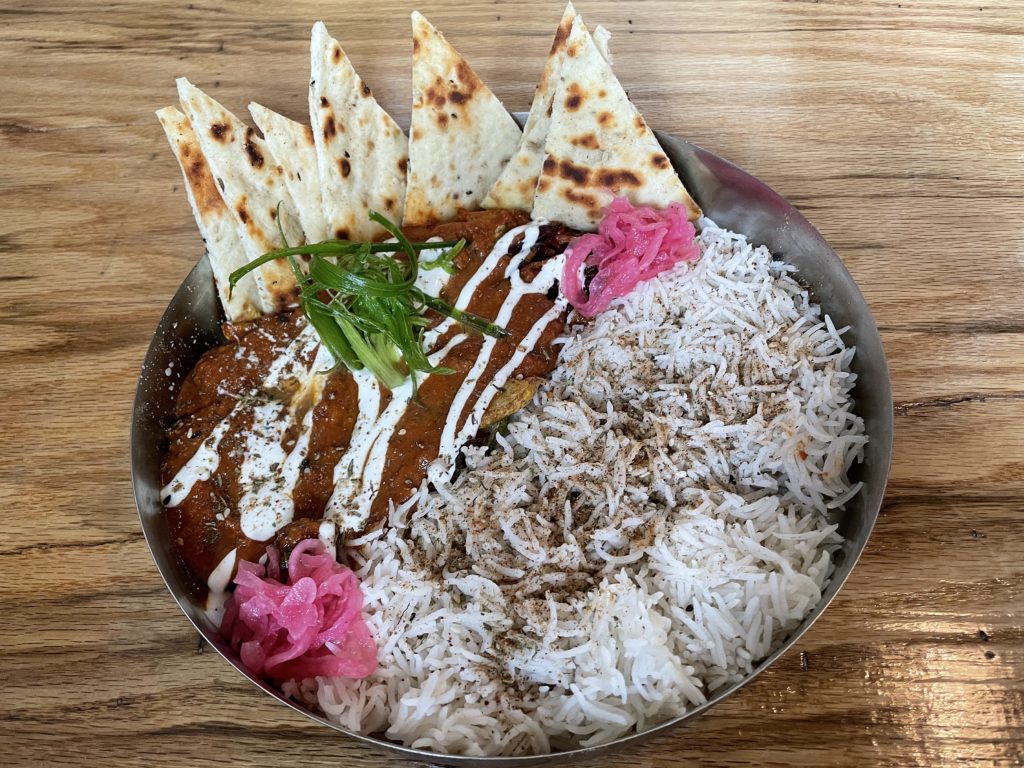 Yes, you heard that right: The most characteristic British pub-style dish is not the fish and chips that I can hear you assuming, but chicken tikka, the spicy chicken curry dish that Indian immigrants brought to Britain and shared with the world. Chicken tikka has become the UK’s most popular dish, served in all Indian restaurants and many pubs and available ready-made in all supermarkets, according to British Heritage Travel.

But how about fish and chips? Yes, of course, don’t worry, they’re still right up there on the pub popularity list.

Pints & Union appears to be emerging from pandemic lockdown with moderate caution. A large sign just inside the entrance shouts READ ME, then goes on, more politely, to invite you to seat yourself and use a QR code pasted on the table to summon a digital menu on your smartphone. Once you’ve decided, stroll up to a designated ordering area at either end of the bar to place your order.

The pub-style, beer-friendly menu was created by pub owner Joe C. Phillips to fit the establishment’s commitment to be a “progressively old world Public House with classic cocktails, small plates, and comfort beers.”

The menu is relatively concise. Bear in mind that this old pub’s kitchen is no larger than the workspace within a food truck. But it does a remarkable job of turning out quality pub fare. What’s more, it finds a way to crank out about 20 food choices, plus daily specials. About half the bill of fare is marked as vegetarian or vegan.

It’s sorted into categories from shareables and starters through sandwiches, entrées and vegan/vegetarian dishes, but regardless of category, everything falls into pretty much the same affordable price range. Pricing ranges from $9 (for a scotch egg or vegan dog) to $18 (for a panko-and-parmesan-breaded pork tenderloin schnitzel platter from the entrées).

The beer menu is chalked on blackboards that span the length of the bar, offering a wide and varying selection of beer guru Roger A. Baylor’s best craft and import beer picks (plus liquor, cocktails and wine, as a pub should do). If you’re looking for mass-market American beers, you’re out of luck. Stretch your brew horizons and try something new.

Ordering went smoothly enough, once I found Wi-Fi. We put in our orders, then summoned a couple of beers to sip while we waited.

Lured by an Instagram post, I came looking for Akasha Fehr’s XL lager ($4.50 for a 10-ounce glass) in mind. This retro lager is made by Louisville’s Akasha Brewing Company in homage to Fehr’s, a historic Louisville brewery. It aims to give us a taste of the pre-Prohibition, German-style beers that our grandparents and their friends enjoyed. Clear and light gold, it offered a good floral hops scent and subtle malty and bitter flavor. Properly served at cellar temperature, not ice-cold, it was crisp and clean as a well-made German-style Pilsner is supposed to be.

A real German treat, Paulaner Hefe-Weizen on tap ($4.25 for a 10-ounce glass), offered a change of pace that felt right on a sizzling summer afternoon. Dark gold and foamy, it showed yeasty hints of cinnamon and banana and good rye wheat flavor. (Mary, by the way, insisted that it smelled like a bin full of nails in an old-fashioned hardware store. I report this without judgment.)

By this time the food had come out, and both dishes were excellent.

Fish and chips ($17) consisted of a large (eight-ounce) slab of lovely white haddock. It was perfectly fried; flaky yet moist and tender within a remarkable breaded crust that Phillips later told me was a blend of London Pride active yeast, smoked maldon salt and lightly seasoned flour, turned into batter with beer, naturally. It came with hand-cut fries (at room temperature, alas, the only flaw in an otherwise perfect meal); tart and spicy red-cabbage slaw, house-made curried ketchup and tangy, vinegary tartar sauce and a lemon wedge and sprig of dill.

Hold the chicken, give me some veggie tikka masala ($14). It was very good, right down to the perfect — fluffy, every-grain-separate basmati rice dusted with aromatic Southwest Asian za’atar seasoning made on the premises. A tasty mix of sliced veggies — zucchini and yellow squash, carrots, onions, startlingly delicious halved Brussels sprouts — were cloaked in a piquant, not-too fiery reddish-brown Indian-style curry, thick and hot-sweet. It was drizzled with lemon yogurt and garnished with dabs of pickled red onion and scallions. A half-dozen toasted pita triangles lined one side of the round dish. This was Indian food with a British accent, about as good as it gets.