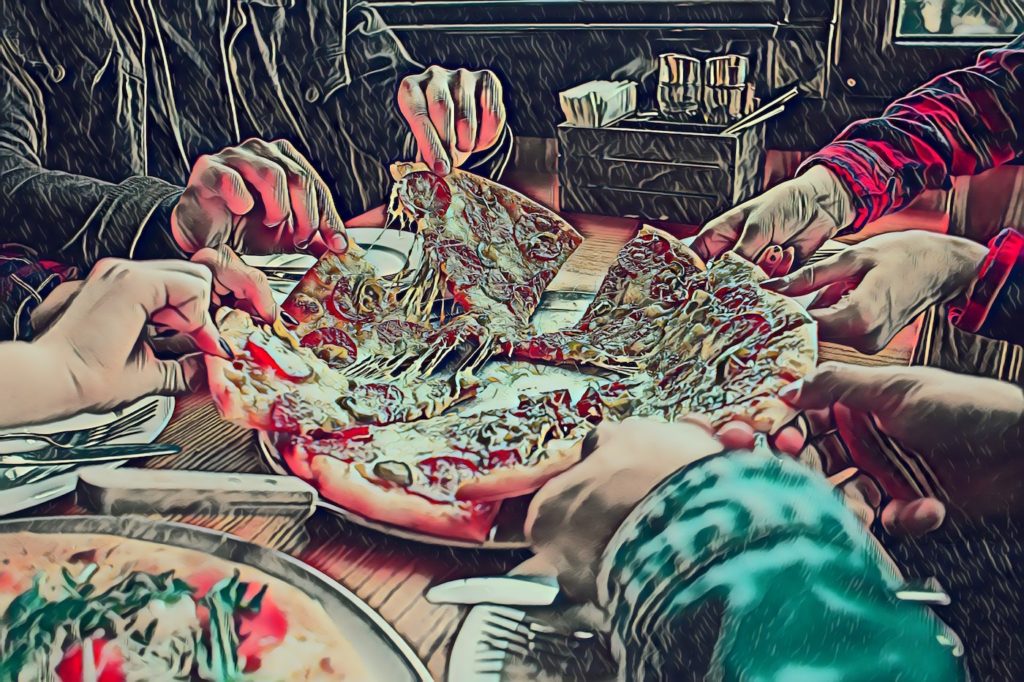 In terms of the pandemic, things aren’t completely back to normal, but they’re a whole lot better. Despite a few worrisome variants, numbers have fallen, vaccines are available and the doors are open to our favorite bars and restaurants. Dining and drinking in public is about so much more than what you’re consuming, so we asked several LEO writers what they missed during the shutdown, what excites them about being able to be out again and what they may have taken for granted.

In March of 2020, I ate my last meal at a restaurant with friends. We knew that COVID existed, but we figured we had that one night to be together before the world shut down. Over the last year, whether or not we’d be able to have another night like that seemed murkier and murkier. Yet, here we are one amazing and odd year later, vaxxed and able to share space again. I missed going into a restaurant or bar and watching the people who’d wander in, unaware that they are being watched. The Back Door used to be a favorite watering hole. For a people watcher, there was no better place to observe humanity in all its states of barfly — turning 21 and getting blasted, arriving drunk or not yet drunk, cruising for a warm body or being cruised for your own. In the many moments spent at The Back Door, the phenomena my friends and I dubbed “shift change” was my favorite. It was the progression of a night where the crowd would change. It wasn’t just the change from older, more subdued crowd to the wilder late night crowd. It was that, and it was infinitely more than that. The crowd grew more interesting as the nights wore on. The diversity changed. It got younger but also more celebratory. Ok, yes, there were alcohol goggles involved but I missed that energy over the last year. I especially miss sending attractive fellows a tall, cool, FREE drink of water compliments of the ladies at the center table. The laughs and confusion were priceless. I’m not ready to wade back into the wilds of the Back Door. The thought of a place with low ceilings and a crowd, still gives me panic attacks, but I’m ready to perch myself somewhere and watch the way humanity moves. That dance, the one we have in public, is part of how we find our communities and survive.  —Erica Rucker

For the last three or four months, I’ve slowly come out of my long hibernation. As a relative homebody, staying at home was, for the most part, no sweat. Sure, I’d have a few moments where I felt like the world was far too small for my liking, but that’s nothing that a few beers and a porch wouldn’t solve. Hell, I live most of my life in my brain, whether that’s reading or writing, insulated from the outside world via headphones and an endless stream of music or podcasts. Living an insular life comes at a cost though. You start to take people for granted or write them off, especially given that for the most part my only human interactions outside of my immediate family were with strangers on the internet. That’s no way to live. The thing is, sometimes your instincts are right. Going to a bar with a friend recently, we “encountered” a rowdy drunk with all the grace of a goddamn bull. Here comes Big Bob the Wrecking Ball to shit his awful thoughts into existence for the whole world to hear. And while he wasn’t the kind of conversation I wanted, he’s exactly the sort of stories you tell later. Maybe that’s a warning to not be Big Bob, or maybe that’s to bond with fellow strangers to whom you probably never would’ve said a word in life. I missed that and took it for granted, meeting complete strangers and bonding over whatever it is that brought us together, whether that’s a drink, a video game or Big Bob. —Syd Bishop

The Big Orange Water Cooler, in the middle of a punk show.

As a sober person, it can feel weird to be in a bar. Everybody is drinking — you’re not. I’ve slowly gotten almost comfortable with it, but there’s one situation that still makes me feel like a mole person: At a punk show like Mr. Clit and the Pink Cigarettes, or Belushi Speedball — with an incredible pit. A good pit releases so damn many endorphins that — at the risk of sounding like a youth minister with a “sweet crucifix tattoo” and a limited pressing double vinyl of Creed’s “Human Clay” — it’s like getting drunk without getting drunk. We all sweat our asses off in a pit, but I’m an especially sweaty person. So, I often sweat out a pound or more of water, and the startling truth I learned when I quit drinking is that being dehydrated makes you act fucking crazy. Seriously. But asking the bartender to stop making drinks multiple times to get me water makes me wanna CHUD my way deep underground. But then I look over, and there it is: One of those bigass orange water coolers with a white lid. Yes, it saves me from several awkward interactions, but it’s more than that. That orange angel tells me that the bar I’m in — let’s say Kaiju — knows that some of us just need water. It says “Welcome friend. You belong here. Get in my sweaty, dirty pit.” Stay hydrated, kids. —Allie Fireel

A Little Help From Friends

You might not guess this from my social media profile, but when it comes to direct human contact, I’m a bit on the introverted side. I’d rather do a phone call than take a face-to-face meeting, and I’m even happier with an email or text. So when the COVID-19 vaccinations started doing their happy work and the local restaurant scene fully opened for indoor dining again, I was surprised to discover how much I had missed getting together with a bunch of friends for a leisurely evening at a favorite eatery or pub. This probably shouldn’t have surprised me. I’m certainly capable of enjoying a solo meal with a drink and a book. But I enjoyed it even more when we’d gather with a half-dozen pals and enjoy conversation and laughs as we discovered a new restaurant or revisited an old favorite. I missed these gatherings because of the conviviality, of course, redoubled by the lack of friendly human contact during the lockdown. I also missed the dinner crowds as a food writer. In a group of six or eight, I could demand bites of everybody’s dish as a professional courtesy. I’d end up with notes on two or three times as many dishes as I could try when it’s just Mary and me. That’s good for me, good for you, the reader, although maybe not so good for the waistline. It’s a professional hazard, and that’s what exercise apps are for!—Robin Garr

What I missed most was karaoke nights. But not for the drunk crooners. Karaoke nights lined up nicely with payday. After a grueling dinner service, we’d clean the line, run home, feed the dogs and meet up. It was too small a place for us to have a “usual” table. We’d just find one in the middle, between the karaoke setup and the pool tables, and cobble together a few extra chairs. The table’d be a little sticky. Marked up with water rings and scratches. Leveled with coasters. Perfect. The bartending duo was a perfect tandem. Pace down the line, take an order, point at the next person waiting to order as they poured the last one, and tally tabs on the shelf where they held cards. It was textbook. Procedural. I’d watch them during lulls in conversation wondering if I could get my trainees to learn from them. We’re not here to work, I’d remind myself, we’re here because of work. To celebrate a camaraderie built by suffering together. To kick back and lob jokes without threat of a ticket printer ticking off orders. To clear our minds of frustrations with reminders of what makes us love our work and one another. For a year, we lost that space for those reminders. Our heads left clouded with day-to-day frustrations, concerns about staying employed and the vitriol of entitled guests. But it’s back now. And while I wouldn’t say the drunks sound better, there’s something nice about hearing them again. —Jon Larmee