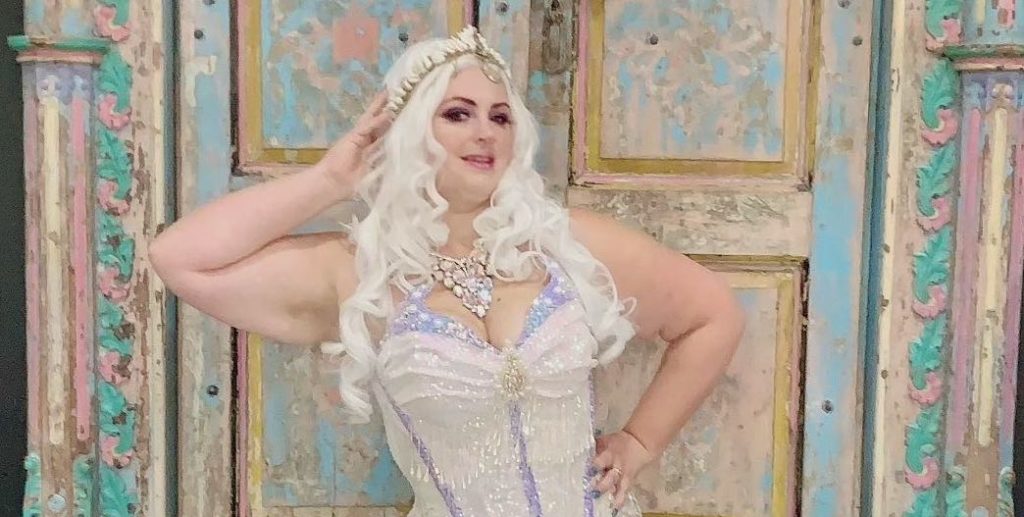 Serendipity Love is the founder of Unicorn Cabaret Burlesque and their new, quarterly shows at Logan Street Market.

Burlesque in Louisville is nothing new. There are many troupes and places to catch a good burlesque show. Serendipity Love has performed at many of them. After moving here from Atlanta where she discovered her love for burlesque, she found a way to fuse her love for costumes and cosplay with her love for the tease of burlesque.

Love and her Unicorn Cabaret Burlesque have a show coming up this Saturday, July 24 at the Logan Street Market’s new performance space. LEO Weekly caught up to Love to discuss her show and how she hopes to offer something different to the local burlesque scene.

LEO: Tell me about the Unicorn Cabaret Burlesque?

Serendipity Love: Sure. So the Unicorn Cabaret is a quarterly show that I produce and I started doing it in April, as the pandemic was starting to be over but not completely. You know, things seem to start opening up again, and I had been living here in Louisville for about two years. I’ve been performing burlesque for over 10 years and I was just, you know, kind of wanting to start my own thing. I performed with a lot of other groups and producers in the area, but I kind of wanted to do something that was my own.

How did you get involved with Logan Street?

We had our premiere show on April 30, which was Derby Eve, and we did it at the Logan Street Market. It was kind of like the first show like that they’d ever done, and it was a huge success. And now I’ve kind of formed a relationship with the folks over at Logan Street to do a quarterly series of burlesque shows.

What kind of show is it?

So it’s a different kind of cast of characters. I’m kind of trying to provide the city of Louisville with a variety of performers. There’s a lot of really amazing people out there. So, um, that’s kind of like my goal is to give, you know, the performers here locally an opportunity to show off their skills.

What is burlesque to you? I think people have different interpretations.

Well, a lot of people assume that burlesque is either like party city, you know, black fishnets, corsets, lots of ruffles kind of thing. Or, if they’ve seen the Christina Aguilera and Cher movie, they think it’s kind of like a lot of voguing and like being on stage but not doing a lot. To me, burlesque is a combination of a whole bunch of different kinds of performance art. For me, burlesque was very much about the tease and the striptease, specifically.

A lot of people might think it was just like old fashioned stripping. For me, it’s more than that. It’s kinda more about, you know, exuding body positivity and confidence and getting to show off your artistic skills and kind of embodying the whole kind of glamorous ideal that I think was part of burlesque when it started back in like the 1800s. It has just kind of grown into this thing that we do now.

You said you wanted to offer something different with Unicorn Cabaret Burlesque. What can people expect?

It changes every month, so every month there’s new performers. It’s never the same people or the same cast of characters. So that’s kind of like, I think what makes it stand apart.

What people can expect is… there’s this beautiful performance space at Logan Street [Market]. It was really… Logan Street is this big warehouse that they converted and has all kinds of amazing vendors and pop-up boutiques. And they had this huge space that they were using for storage for a bit. They converted it into a performance area during the pandemic, but because of everything that was happening, they didn’t really have a chance to utilize it, but it’s this beautiful, kind of Bohemian space. It’s got, like, cabanas and beautiful tables and couches and a perfect stage.

Tell me how you got started in burlesque?

So, I originally got into burlesque because it was something that I really enjoyed going to as like, kind of like a night activity with my friends when I lived in downtown Atlanta.There was a lot of great burlesque there. And, I was just really inspired by the performances that I saw. I had already kind of gotten into costuming, just from doing cosplay and a couple other things. And… women who were just so confident, and it was all different kinds of body types.

What are the details of the show?

At Logan Street Market on July 24. Doors open at 8 p.m. The show starts at 9 p.m. There’s going to be a meet and greet for VIP ticket holders where they can come and, you know, schmooze with the performers and, um, yeah, that’s all.  There are plenty of those general admissions available. There’s tons of seats available.

General Admission tickets are $25 and more information is available here.