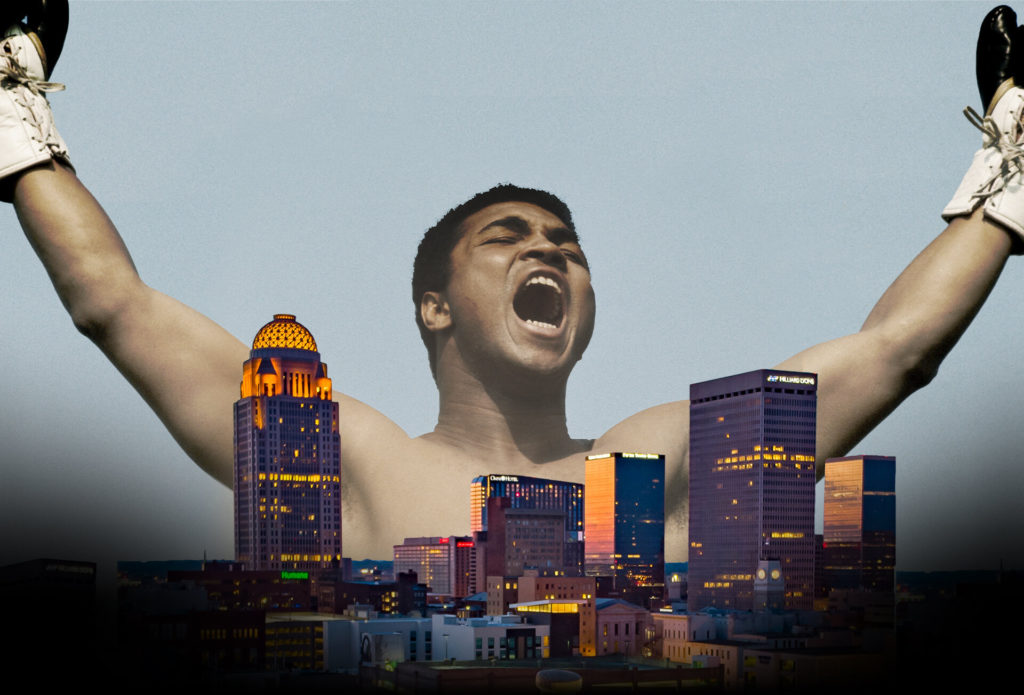 American Rescue Plan Public Hearing
Southwest Regional Library
Free  |  6:30-8:30 p.m.
Louisville’s getting a lot of money from the American Rescue Plan Act, like $388 million worth. And the city wants to hear from you how it should be spent. You can let them know at this public hearing. There will be one more at West Broadway Church of Christ next Monday from 6-8 p.m. You can also share your thoughts online.

Free Screening of ‘City of Ali’
Iroquois Amphitheater
Free  |  8:30 p.m.
Before it hits streaming, catch a showing of the “City of Ali” documentary, about the day that Louisville — and the world — came together to celebrate the life of the recently departed Muhammad Ali. The movie, which has an 89% on Rotten Tomatoes, features interviews with friends and relatives who knew Ali in his early days, as well as reflections from big-names like 4-time heavyweight champion Evander Holyfield and ESPN’s Hannah Storm. Seats for this showing are available on a first-come, first-served basis, and concessions will be available for purchase. Proceeds from the film go to the Muhammad Ali Center.

Neighborhood Nights
Bardstown Road
Free  |  3-9 p.m.
Last summer the pandemic stole most of the outdoor festival season, and we lost not only big multi-day music events, but also the small pop-up and street festivals that bring neighborhoods alive. Neighborhood Nights in the Highlands aims to help bring back some of the latter, with free trolley rides down Bardstown Road, from Broadway to Douglas Loop, and live music planned at several locations. So, get out, shop, walk, eat, drink, listen and support local businesses.

Games on Tap
Atrium Brewing
No cover  |  6:30-11 p.m.
Games on Tap is back! Beer and board games, how we’ve missed you. The games, like The Resistance, Codenames, Klask and Telestrations, will be provided. Or, you can bring your own. You’ll have to buy the beer.

Art in the Park Scavenger Hunt
George Rogers Clark Park
Free  |  6 p.m.
Gather the family for a scavenger hunt in George Rogers Clark Park. You’ll be given a list with nature items to find throughout the park. Once you’ve completed it, take a photo and tag Louisville Parks and Recreation on social media. There will also be artwork donated by local artists hidden throughout the park. Cake and other refreshments will be served to celebrate the park’s 100th birthday.

LOLGBTQ Showcase
Aloft Louisville Downtown
$5  |  7:30-9 p.m.
Laugh freely at this LGBTQ-friendly comedy show. Your headliner is a pioneer in comedy as the founder of the Midwest Queer Comedy Festival, Dwayne Duke. Queen of charity and comedy Gwen Sunkel from Indianapolis also performs. (She hosts a series of comedy shows that raise money for reproductive health groups in the Midwest). Also on your roster for the evening are Bridget Denman, Gretchen Schultz, Avery Razor, Alex McAfee, Andra Ginny Jacobs, Alexa Irizarry and host June Dempsey. Tickets are $5 apiece, but you can also reserve a table for four with $20.

Recbar Bingo
Recbar Jeffersontown
No cover  |  8-10 p.m.
Skip over Recbar’s arcade collection – just this once — and play a round of bingo. Win gift cards, swag and more. The cover-all jackpot starts at $50 and rolls over to next week if no one hits it.

Margaritaville Party
Harry’s Taphouse and Kitchen, Jeffersonville, Indiana
No cover  |  11 a.m.
Harry’s Taphouse in Jeffersonville is hosting an all-day, Jimmy Buffet-inspired party preparing for a tribute act playing at the Riverstage in the evening. There will be tropical cocktails, a cheeseburger in paradise special and Jimmy Buffet tunes. Wear a Hawaiian shirt or other island wear for max relaxation effect.

Late for Dinner with Zu Zu Ya Ya, Tangerine Nova, and The Frogmen
Art Sanctuary
$5 (suggested donation)  |  8 p.m.
Three local music acts perform at Art Sanctuary’s Late for Dinner series this Friday. Zu Zu Ya Ya is an 11-piece band that performs world music, including originals and tributes. Tangerine Nova is a duo that plays “honest music,” with their latest album exploring experiencing the pandemic with a mental illness. Finally, The Frogmen will perform freestyle, instrumental, hypno-surf groove.