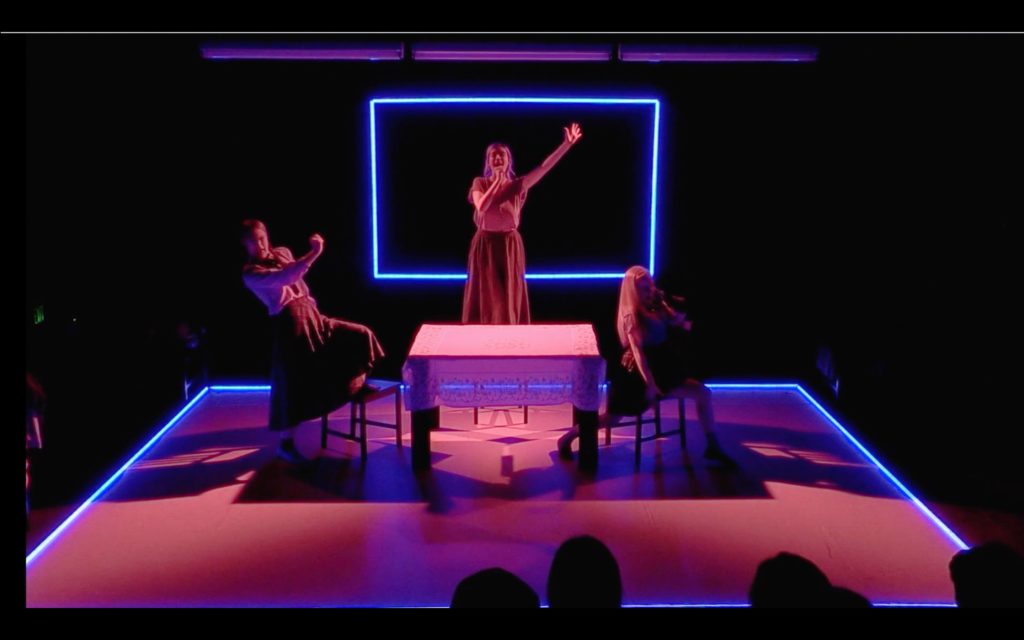 Hitler's Tasters from the TEATRON Festival of Jewish Theatre.

All the world’s a screen, as Shakespeare might have quipped, had he been around to paraphrase himself during the last year-and-a-half, when some enormous slice of the world’s population suddenly found itself grappling self-consciously with issues like lighting, sound, wardrobe and “presence” in a world where classrooms, conference rooms and shared social spaces of all kinds had suddenly shrunk down to the dimensions of cell phones, tablets and computer terminals.

Live theater, too, moved to screens last year, and though live performances are returning and companies are starting to set their schedules for the fall (and Shakespeare is back in the park!) screens are not going away.

Their ability to deliver powerful theater directly into the hands and homes of audiences is manifested in a globe-spanning streaming festival presented this week by the TEATRON Festival of Jewish Theatre, presented in partnership by Bunbury Theatre and the increasingly ambitious company called ShPIeL Performing Identity, helmed by David Chack, which over the last decade has grown into a unique theater network with nodes in Chicago, Los Angeles and especially Louisville, where Chack has developed a strong presence and an impactful artistic relationship with Juergen K. Tossmann of Bunbury Theatre. Over the years, ShPIeL has been engaged in both developing new works and presenting classics (like a powerful production of Bertolt Brecht’s “Mother Courage” a couple of years ago that used the English language translation by Tony Kushner (“Angels in America”).

Now ShPIel, Bunbury, and Los Angeles-based independent artist Casey Adler have created and curated a sprawling assemblage of live-streaming and pre-recorded plays (some full length, some in excerpts) and roundtables that runs this week, Thursday through Sunday. And as nearly as I can tell — and much to my surprise — TEATRON seems to be the only theater festival in the country that describes itself as a festival of Jewish theater, a rubric that brings together a program of astonishing breadth and diversity.

The first three nights of TEATRON are arranged thematically.

Thursday’s program, “The Holocaust Represented in Theatre and Performance,” opens with two works of dark humor based on actual events.  “Max & Willy’s Last Laugh,” by Conor Duffy and Jake Broder, tells the tale of German cabaret comedy stars Max Ehrlich and Willy Rosen, who fled from Germany to Holland during the Holocaust, only to be apprehended and imprisoned in a transit camp from which Jews were loaded aboard trains and sent east to the death camps. There, the commandant of the camp recognized them — and ordered them to put on cabaret shows for their fellow prisoners.  Another cabaret act — this one created by a woman named Karel Švenk — is the basis for Naomi Patz’s script “The Last Cyclist,” a satire in which escapees from a mental asylum begin hunting down bicyclists. And perhaps the most appetizing play on this night’s bill is “Hitler’s Tasters,” by Michelle Kholos Brooks. An award-winning production that drew sell-out crowds at the Edinburgh Fringe Festival, it recounts the tale of three young women who every day, meal after meal, risk their lives as Adolph Hitler’s food tasters.

Friday’s theme, “Women and Spirituality,” is headlined by the Israeli playwright Hadar Galron’s controversial and much-produced “Mikveh,” that explores gender, sexuality and power in the setting of the Jewish ritual bath — the mikveh — where women traditionally “purify” themselves once a month before resuming sexual relations with their husbands. An excerpt from Michelle Azar’s “From Baghdad to Brooklyn” explores the experiences of Baghdadi Jewish immigrants to the U.S. And episodes from “Woman Before a Glass,” by Lanie Robertson describe momentous events in Peggy Guggenheim’s encounters with Nazis and her quest to preserve the so-called “decadent” art that Hitler strove to destroy.

Saturday’s program takes up “Black and Jewish Allyship,” with three very intriguing pieces. “Jump Jim Crow: A Choreopoem,” by Chance Parker, is directed by Baron Kelly (formerly head of acting and graduate studies in UofL’s theater program). It features Kala Ross (a regular on Louisville stages and an MFA acting graduate from UofL) as a BLM protester locked up in solitary. Roger Guenveur Smith, who has collaborated with and acted in a dozen or so Spike Lee joints, enters into the mind of Anne Frank’s father in his one-man show, “Otto Frank.” And there’s an excerpt from the recent streaming Bunbury production of Colin Greer’s “Imagining Heschel,” a biographical play about the theologian and civil rights activist Rabbi Abraham Joshua Heschel.

Sunday’s program includes repeats of earlier selections and a night of Jewish comedy (with some Louisville highlights).

Pricing is “pay what you can” with suggested donations of $36 per night or $118 for the full festival (donations are tax deductible). But donation or not, the streams are available. Times and details are available here: shpielperformingidentity.com/productions. •