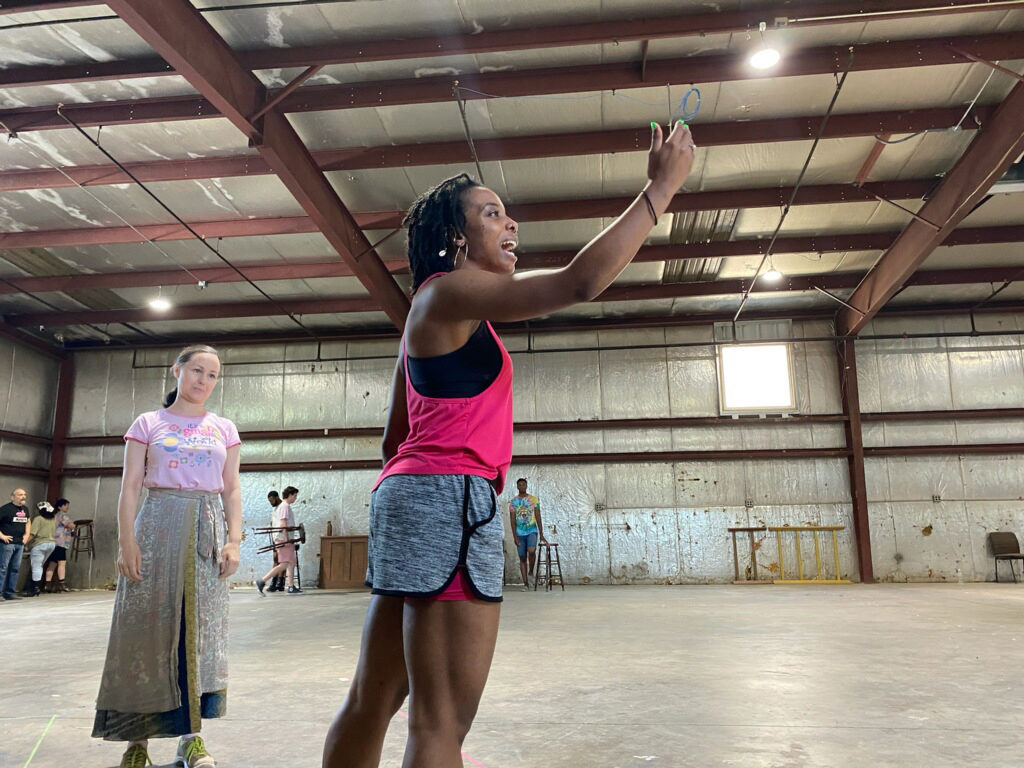 Quill in hand, Jon O’Brien delivers the first line of the play Shakespeare in Love.

O’Brien is playing William Shakespeare, and he’s supposed to struggle with that line, which he’ll struggle with again when Kentucky Shakespeare Festival opens Shakespeare in Love (June 16-July 31), their first play in Central Park since theaters shut down in March of 2020.

The plot of the show — for anyone not familiar with the 1998 Academy Award-winning film upon which the play is based — revolves around Shakespeare’s struggles as a writer, an actor and a lover. Spoiler alert: the poem, and William Shakespeare, end up doing pretty well.

Shakespeare in Love is the first play rehearsed by Kentucky Shakespeare Festival in their new home and rehearsal hall on Myrtle Street, which is a literal stone’s throw from Central Park. On a recent Saturday morning, I got a chance to visit the new home and see the cast rehearsing. Kentucky Shakespeare’s Producing Artistic Director Matt Wallace showed me around the building, which has just finished its second phase of construction, including a suite of offices and an on-site costume shop.

Wallace is almost always excited about Shakespeare when I talk to him, and when we sat down in his new office for our interview, he could barely stay in his chair. At one point he was gesturing towards the park and stopped mid sentence:

“I love that I can motion ‘over there,” he gushed, “because the park’s right over there!”

Wallace continued, gesturing to other locations within pointing distance, “because when we were in the rehearsal hall” he stopped, gestured and smiled some more, “and while we were building the costume shop,” he pointed and laughed.

His excitement is warranted. It’s a really nice space, the kind of home most theater companies never get. “It’s always been a dream to be in a space where we have our own costume shop, our own rehearsal hall, storage, our offices.”

The buzz of activity in the rehearsal hall looked more like a movie set than a place where you might rehearse a play. Steel I-beams soar overhead, and the space is full of natural light. The dimensions of the entire Central Park stage are taped out on the pocked concrete floor.

Starting the 2021 summer season with Shakespeare in Love is another thing Wallace is excited about. He’s had his eye on the script for several years, and he decided it would be a perfect play for the company’s 60th anniversary, what he called “a love letter” to the city that has supported and loved Kentucky Shakespeare.

Of course, that was before COVID shut down all the theaters. But 15 months later, Wallace says the show has even more meaning.

“I didn’t know it would end up being an even more perfect love letter on the return to theater — live theater — and Shakespeare.”

The play itself is full of love letters, star crossed lovers, couples and couplets and sword fights (and a dog), but the script is all written in contemporary language, which Wallace hopes helps bring in some new audiences.

“I think for people, if they’ve not been to Shakespeare in the Park before, I thought, maybe this will be an introduction, to get them to the park.”

Wallace doesn’t just rely on scripts to get new people to the park. Transportation is one of the most confounding barriers to bringing theater to underserved and marginalized communities. Put it another way — how useful is free Shakespeare if you don’t have bus fare to get to the park? To begin addressing that issue in Louisville, Wallace and Kentucky Shakespeare are offering TARC to the Park.

Soon enough Wallace will also get a chance to move an audience inside that new rehearsal space, when Kentucky Shakespeare’s fall show will temporarily transform the hall into a theater.

“We’re going to do a two actor ‘Turn of the Screw,’ by Jeremy Hatcher, from the Henry James. It’ll be fun. Our audience gets to experience our new space.”

While that rehearsal hall is bright and bubbly during the day, take out the daylight and turn off the lights, and those steel I-beams will feel more like giant claws; the cavernous space will ricochet echoes off unseen walls.

In early 2022, Ky Shakes will co-produce the queer-focused play “Shakespeare’s R&J” with Pandora Productions, a partnership originally planned for the winter of 2021. It’s a partnership worth noting because it uses a re-imagining of Shakespeare’s Romeo and Juliet to tell a  story of about the queer community, a community that isn’t often openly represented in Shakespeare’s plays (or ever; opinions differ).

But first up — O’Brien and William Shakespeare have to figure how to finish that first line of the show, which the shakespearienced will recognize as the start of a famous sonnet.

Will — it’s “to a summer’s day.” And presumably by extension, a summer’s night with Kentucky Shakespeare, back home in Central Park.

Shakespeare In Love runs from June 16 to July 31 in Central Park. Performances begin at 8 p.m. and are free. Visit kyshakespeare.com for the company’s complete schedule.