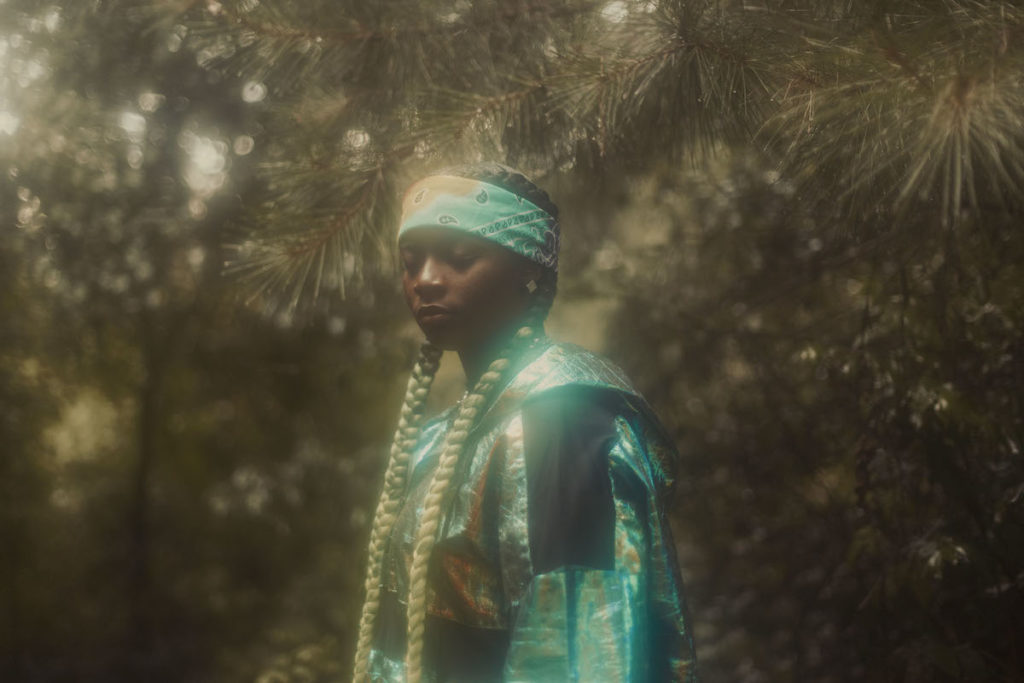 Louisville is prime ground for talent. From churches to schools to the raw, self-taught dreamers, there is a deep well of artistry ripening in the protective boundaries of the city. One such talent, Marzz, born Laria McCormick, has been singing since she was four, honing her skills in the choir of her South End area church where her mother and grandmother were ministers.

As Marzz matured, she realized that her love for music and her sexuality played against the teachings of the church. She decided that a secular music career was the avenue for her, though she did not abandon her love for gospel music. After coming out in high school, Marzz would perform at school for rallies and began to share her work through Instagram. It wasn’t long before her smooth, rich vocals were noticed.

“I would always post freestyles and stuff, but this one day particular, you know, I posted this freestyle and it got up to like 4,000 views. To me, that was huge,” said Marzz. “ I only got like 70, you know, to a hundred, maybe 400 views. And it started really picking up attraction. And I was like, yo, this is crazy. Then, the guy, basically I got seen by him and he reached out to me, was like, ‘yo, your pen game is crazy.’ And I was like, oh, wait a minute. You already know, I gotta go into investigative mode.”

The ‘him’ was none other than Timbaland, legendary hitmaker and record producer whose list of credits includes working with Missy Elliott, Beyoncé, Rihanna, Jay-Z, Drake and Justin Timberlake.

“He said he wanted to work with me. And he was like, ‘I’ll fly you out.’ And I was like, ‘What?’ Say less,” Marzz said mimicking her disbelief and enthusiasm.

Timbaland, whose real name is Tim Mosley, flew Marzz to Los Angeles where they worked on four tracks together. He also shared her talents on his Instagram page.

“Being in the studio with him was just crazy. It was literally like my big brother and anything that I was babbling when he was like, ‘Oh yeah, that’s it,” she said. “Like anything that he pulled up, it was just like, I connected with it. It was crazy. It was an amazing experience.”

Two of those tracks will be featured on Marzz’s upcoming EP, Love Letterz. In her music, Marzz hopes to explore herself but also to help her fans discover more about their own lives. As we chat, she is polite and candid. She speaks with honorifics and with humility about her recent successes. At 21 years old, she is beginning to grow comfortable in her own skin.

Part of the process of growing more comfortable with herself was being able to come out to an accepting community at Fairdale High School where she played basketball and ran track.

“Fairdale, four years ago, was crazy. It was definitely a new opening as far as the LGBT community, ‘cause it wasn’t a lot of us there, but it was very welcoming,” she said. “It was never an issue. You know what I’m saying? So I really do appreciate everybody that was there that was loving and stuff. Cause that really, when we went, when we had different games or different track meets, we didn’t feel apart from anybody.”

She speaks kindly about her days at Fairdale, and “Coach James,” who she said helped her during a difficult time after losing her brother, and living in the South End.

“I grew up in the South. I grew up like in the Iroquois area, so I’m not going to say I had it too rough. I was fed at night. I had decent clothes every day. It wasn’t really so much of a struggle. It’s just basically building a foundation around my family. I was really family oriented.”

Her past and who she sees herself becoming are central to the work that she’s putting out.

“I feel like I want people to know that I’m definitely a loving person,” she said. “I want people to understand that it’s okay to have self love, to find yourself again. That’s the main focus of the Love Letterz, EP. It’s basically about self love, finding yourself and taking the time to be selfish and being able to sit there and fight your demons.”

She has bigger dreams, too, like many young artists. She is looking forward to big things for her career, and while music is her first love, her ultimate goal is a bit of a plot twist.

“I want to sell out arenas. I want to travel the world,” Marzz said. “I wanna go back to college, get my doctor’s degree. That’s something that I’m planning on doing at some point. I want to be a neurologist — a surgeon, actually. So hopefully that gets, that goes in my plan.”

“I’m a huge Jhené Aiko fan. So, if she was to even just hear anything of mine that would just bless my heart. But the goal that I have set is really to just connect with my audience. I cannot wait to just be in a live audience and just singing and connecting with my audience, to be honest. That’s one of my biggest goals right — to just fill myself with… surround myself with the love and hopefully bring people out of their shell, give them something to remember and just keep being me, being a loving person.”

It is refreshing speaking to a young artist on the verge of potentially becoming a star. It is nicer even to speak to one whose perspectives, dreams and outlook feel solid and grounded. When success comes looking, it won’t find a better candidate than Louisville’s Marzz.

“With my music, I’m really just hoping to speak, to empower the young girls that’s dealing with not really knowing who they are, and just helping them find themselves through being comfortable in their own skin.”

Look for Marzz’s Love Letterz EP, out on June 17.