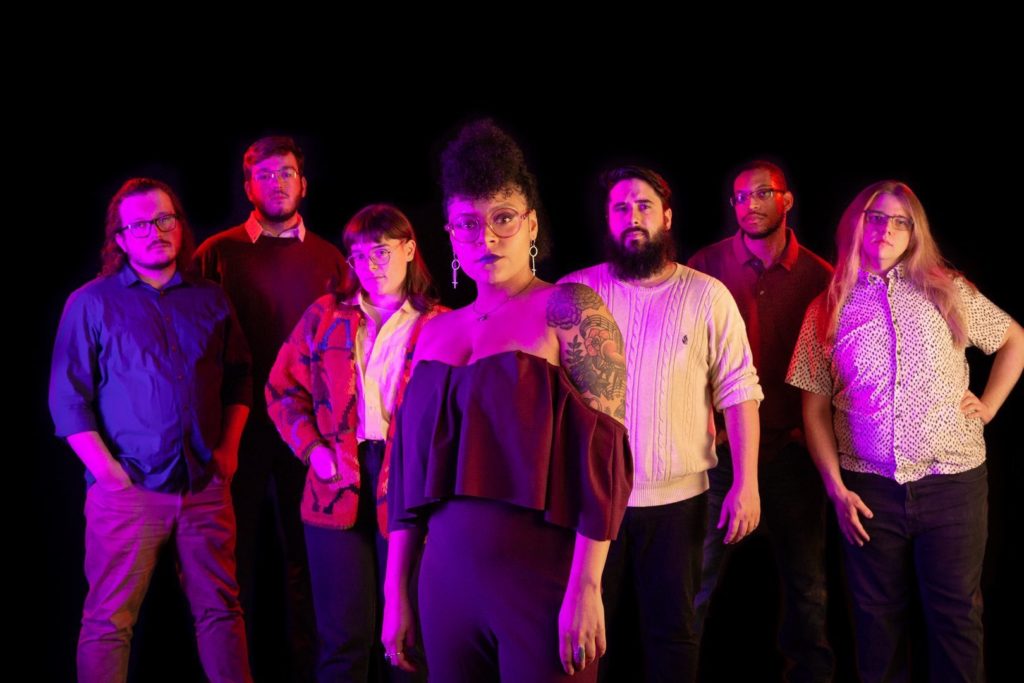 Kiana and the Sun Kings | Photo by Sally Jean Wegert

Kiana &  The Sun Kings is a big band. Members, Kiana Del (vocals), Matt McKay (flute), Trevin Little (saxophone), Harris Boyer (guitar), DéQuan Tunstull (piano), Phillip Bullock (electric bass) and Fiona Palensky (drums), are releasing new music — and are set to take the stage at Headliners Music Hall on Saturday, June 26. The band, like so many artists, used the last year to regroup and to find new ways to be creative. Kiana Del held open living room sessions with friends just to give them chances to connect during the last year.  LEO caught up with the band to discuss their new release Chrysalis and their upcoming live show.

LEO: Tell me about the new EP.
Kiana Del: Our new EP Chrysalis is the first of a set of two, and it’s sort of a culmination of all of the music that we’ve written together over the past three years.

What themes does this new release explore?
This EP is sort of my…lyrically, my exploration of a pain that I’ve experienced between love, oppression and just sort of its heavier themes than I think EP two which I think will be called Monarch. And that one is sort of like the rise out of that period of growth, but yeah, I think that the first album symbolizes a deep period of growth for me.

Tell me about the show.
I believe doors are at 7 p.m., and the show itself starts at 8. We also have the pleasure of featuring two other local bands. We’ll be featuring Casey Powell’s band, and The Jesse Lees trio with Otis Junior. And our performance is going to be the full EP and then a few new songs that are unreleased too. So we’re hoping it’s going to be a pretty cinematic show.

Because you said the word cinematic, are you using any digital backdrops?
Yeah. There are a couple tunes on the EP, there’s like a prelude and an interlude, and I’m hoping to project some images and use some sound from the EP.

Tell me a bit about what you all have been doing over the last year since COVID? How did your band members sort of cope with not being able to play?
At first, it was really difficult. I think we spent the first four months… I mean, we would catch up on Zoom and things like that, but we weren’t really playing or creating together in the way that we were used to. Especially since my guitarist’s parents were immunocompromised, there was just no way for us to get together. We did start making some socially-distant videos, which you can see on our YouTube channel that we sort of recorded separately and then put together.
Eventually we ended up renting a practice space that we now still use. In the early days of the practice space, I went and measured out, like, 6 foot spots. So we knew who would be standing where. There’s seven of us. So it was like, it was a really difficult time. Um, when we were rehearsing for the EP, we had to borrow a friend’s backyard to rehearse them. We sort of found our way to get together, which was — which I feel really blessed that we could do that.
We started a regular practice schedule once we found a safe space to start to get together. We started practicing once a week, every single week because it was really the only musical outlet we had since we weren’t playing shows. Honestly, getting on that, like, once weekly schedule really helped us refine as writers and players. We wrote a ton of music in that time.

What are you looking forward to in your upcoming show?
I’m looking forward to being able to really connect with people. We, of course, did a little bit of that through social media, and it was very cool to see the reaction even, you know, even far away from our fan base, but, I’m excited to see everybody’s faces and to feel the crowd’s energy. There’s truly nothing like the chemistry that you create with each crowd. So I’m very excited to get back to that. •

Catch Kiana & the Sun Kings at Headliners Music Hall on June 26 with special guests The Jesse Lees and Casey Powell.