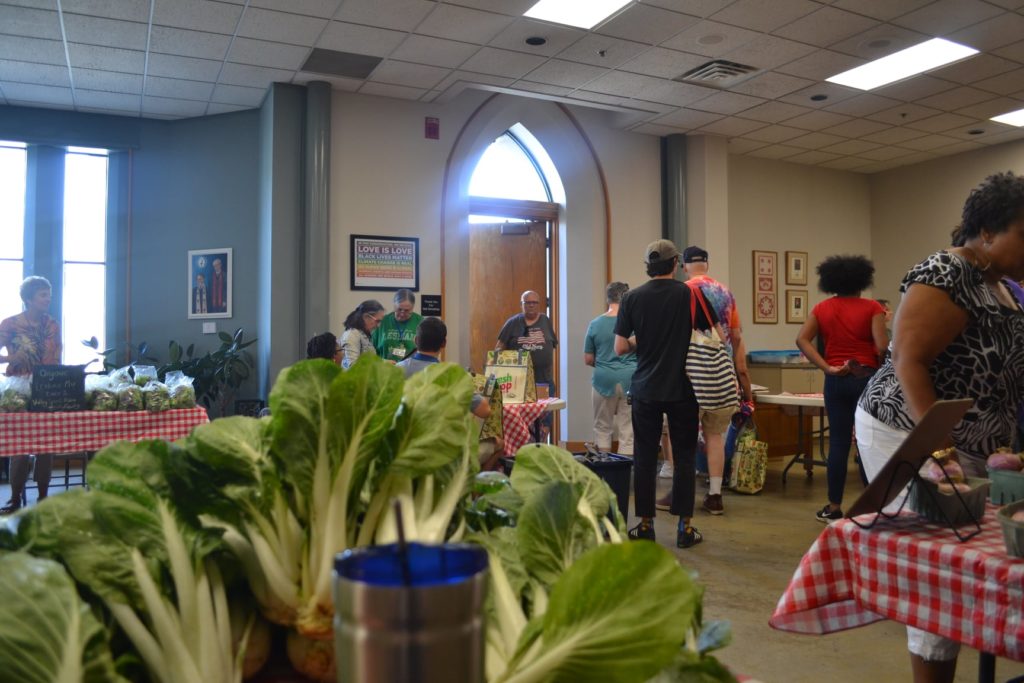 The city is proposing cutting funding to New Roots, which holds Fresh Stop Markets in fresh food-insecure neighborhoods like this one in Old Louisville. | Photo Provided By New Roots.

Food justice activists say Mayor Greg Fischer’s proposed budget does not go far enough in addressing food insecurity in Louisville, but they have their eyes on the millions in American Rescue Plan Act funding that Metro has been given to spend.

After allocating $3.5 million to a community grocery store last year — fulfilling an action item in Fischer’s racial equity plan — the city’s proposed budget is going back to funding piecemeal fixes to Louisville’s food access issues that disproportionately affect Black residents. Fischer’s proposed budget sets aside $389,000 for food access programs, including a $200,000 appropriation to Dare to Care and its food banks. The rest of the money goes to various other nonprofits, including Neighborhood House, The Food Literacy Project and Chef Space. It also floats cutting its allocation to New Roots and the nonprofit’s affordable fresh food markets, almost by half, to $13,700 from $25,000. A Metro Council budget amendment announced Monday adds another $100,00 for Volunteers of America to provide food and other services to houseless families.

But, the Food in Neighborhoods community coalition plans to request $30.7 million — or almost 8% of Louisville’s $388 million American Rescue Plan allocation — to distribute to its coalition of food justice nonprofits, businesses, farmers and activists with hopes of addressing food insecurity in a more holistic way. The coalition also wants to use the money to support the community organizing around food that coalesced during the COVID-19 pandemic through initiatives like Feed the West, said Abby Rudolph, a member of Food in Neighborhoods, or FIN.

“We just really want to prioritize that and think of new ways to get food to folks and to make sure that everybody’s fed and healthy; appropriate ways that goes beyond traditional emergency food assistance programs that we typically think of in the U.S., because that really is just a Band-Aid. It doesn’t address the reasons why households are food insecure,” she said.

FIN already has over 30 members, including the Louisville Community Grocery, The Food Literacy Project and New Roots.

In a statement, Fischer spokesperson Jean Porter said, “Food security is vital for healthy communities and for stable families, and necessary for equity and our ‘whole of city’ approach to preventing violence. We’re thankful to great partners, including Dare to Care, for working to help families and individuals have access to quality food, and are always open to ideas for doing even more to address this challenge.”

If FIN receives the money it plans to request, it intends to create a food policy council made up from representatives of its community groups to decide how the funding will be distributed. Some ideas, though, are to support a fresh food program for corner stores by Kentucky Greens Co. and to form a food hub, which the U.S. Department of Agriculture defines as a central facility that helps aggregate, store, process, distribute and market locally — and regionally — produced food products. FIN would also like the money go toward positions within Metro government devoted to food access and to restart the city’s Farm to Table program.

The mayor’s office has already announced how it plans to spend the first $38.9 million of its ARP funds, which it’s directing to “immediate and urgent challenges” facing Louisville, according to a June 10 press release. That includes $250,000 to “emergency food assistance,” which Dare to Care says will go to supporting its food distribution efforts, which are still in just as high demand as they were at the start of the pandemic.

For the rest of its ARP funds —  around $349 million — the city is soliciting ideas from the community. Because food is such a fundamental need, Rudolph doesn’t think FIN is asking for too much, even though the number is “ambitious.”

“Healthy, affordable, appropriate — culturally appropriate — food is a basic human right,” she said. “So it should not be tied to income. It should not be tied to cultural capital or race or your geographic location or your education level or your employment status or whether you’re a citizen of the United States or undocumented. It’s a basic human right.”

Louisville city government has attempted over the years to expand its food access efforts, but its initiatives have not lasted.

Its Farm to Table program, which sought to transport food from local producers to the forks of Louisville residents, ended in 2019 amid budget constraints after several years in existence. A past attempt to create a food policy council imploded in 2013 after Metro government tried to impose requirements onto the group, said FIN member Andrew Kang Bartlett.

2020’s racial justice movement and the pandemic spotlighted the longstanding racial inequities in food access in Louisville. Black-led initiatives and businesses addressing food inequity in the city sprung up, including the Black Market KY grocery store in The West End and the charitable Feed the West program, both led by activist Shauntrice Martin. Metro Council also made its own move last year, setting aside $3.5 million from the city’s budget for a community grocery store in an underserved area of Louisville. One month ago, WHAS reported that Metro Government had found a local group to start the store, but an agreement must be finalized before the city announces who the recipient is.

Karyn Moskowitz, the executive director of New Roots, said she was surprised to see that the mayor’s office is now proposing to almost halve her organization’s funding, which it uses for its Fresh Stop Markets in eight Louisville Metro area neighborhoods, including Shelby Park, Park DuValle and California. New Roots uses a shareholder model with lower prices for low income families. Last year, it expanded its membership to 700 from 500 under the impression that it would be able to sustain its growth with city funding, which makes up 10% of its budget. About 75% of its members are lower income. Moskowitz said she was told by the city that new nonprofits had emerged that also needed funding, so Metro cut its share to New Roots.

“It doesn’t make much sense,” said Moskowitz. “If we want to be a world class city focused on justice and racial equity, we should acknowledge that this fresh food is a basic human right and everyone who wants it should have access to it.”

A spokesperson for the Louisville Metro Department of Public Health and Wellness, Kathy Turner, said in an email that the department has been given a $300,000 grant from the CDC that community food organizations can apply for. As it is now, though, Moskowitz is spending time attempting to raise money from sources besides the city government when she said she should be focusing on food distribution and member education.

If FIN receives the money it’s going to ask for, however, Louisville might finally fully commit to the food landscape it needs.

The Louisville health department said it has advocated that a portion of ARP funds “go toward supporting the local food ecosystem through a wide-range of community-led solutions and organizations.”

Funding FIN would also help food businesses that are part of the coalition, like Kentucky Greens Co. by Mike Jackson.

Through Kentucky Greens, Jackson hydroponically grows his own produce and also distributes food for other Black farmers in the state. Currently, Jackson has three farmer clients and the capacity to supply eight stores in Louisville. But, he said, he’s having trouble keeping up with demand from stores. As a younger Black man who is not a veteran and who sells affordable produce, Jackson said it is hard to convince investors and banks to help him. Grant funding would help.

“We have a good team; we have a good structure,” said Jackson about FIN. “Now it’s about getting the funding in the right
hands.”