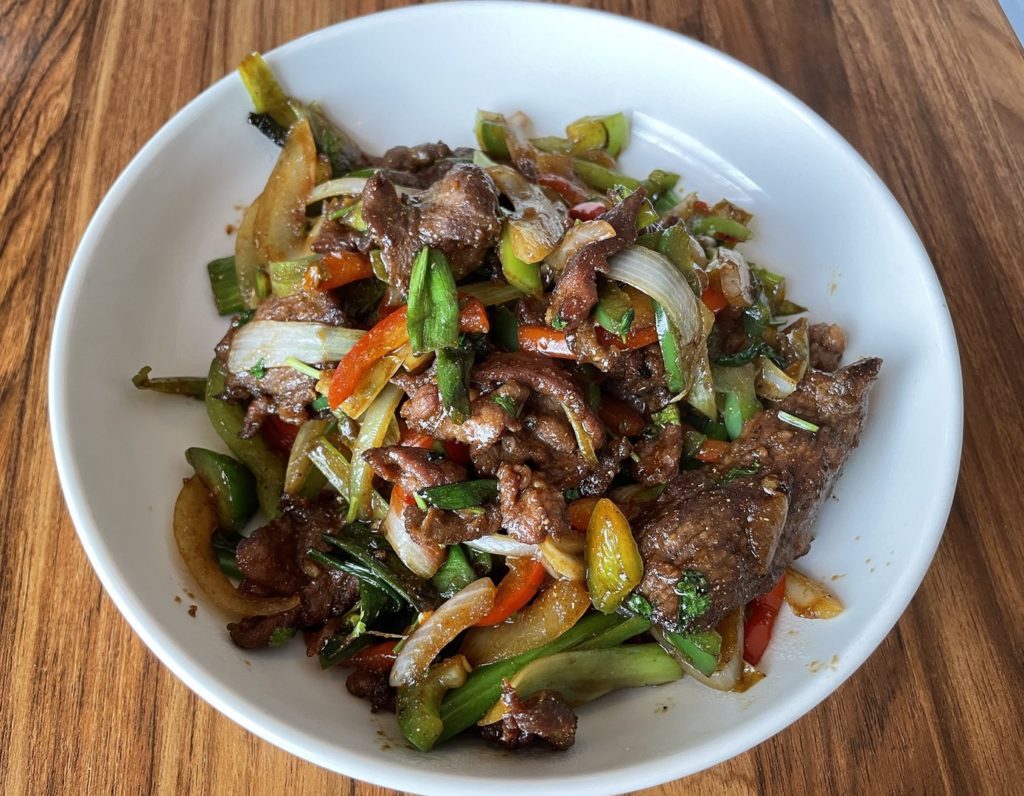 Cumin lamb is loaded with meat but treads lightly with the cumin flavor.

It doesn’t seem reasonable to say that it’s hard to find good eats on Bardstown Road on a Sunday afternoon, but I was sure feeling that way the other day.

Trekking through this usually busy restaurant row on a sizzling afternoon, I struck out at three places before we got to Joy Luck. Success! Heck, I really wanted Chinese food anyway, or so I told my easily-convinced self.

Owner and chef Alvin Lin brings his Taiwanese heritage to Joy Luck’s bill of fare, which is described as “Asian Fusion Chinese Taiwanese.” The food is good, with some noteworthy Taiwanese touches such as traditional soup dumplings, and the menu is carefully laid out in English and Chinese.

Fifteen entrees include six hot-and-spicy dishes, one gluten-free entree and one that’s vegetarian. Prices range from $12 (for mapo tofu) to $28 (for a Beijing-style half-duck). You won’t find a separate “authentic” Chinese menu here, but some of the specialties, like braised pork-belly stew ($13) or spicy farmer’s beef ($15) might appear on such a list; several dishes represent the Taiwanese tradition.

There’s also an extensive build-your-own entree section that invites you to select one base ingredient from a list of eight, from $12 for vegetables or tofu to $17 for lamb, then choose a sauce flavor from a list of 11, including variations like garlic sauce, General Tso, orange, Thai curry and so on. Four rice and noodle dishes work similarly: Choose among four noodle and rice dishes ($11-$15) and select from six proteins ($11-$12).

About 15 starters range in price from $6 (for salad with ginger dressing) to $11 (for lettuce wraps with choice of vegetables, tofu or chicken). The full bar offers an extensive spirits list including almost 70 bourbons.

We started with jasmine tea made with teabags in a sturdy metal pot ($2.50). The tea was clear and light, with faint floral scent, but just-warm water had to struggle to extract the flavor.

A pair of vegetable spring rolls ($2) came sizzling from the fryer, crisp and admirably grease-free. A bit narrow-gauge, they were rolled around what appeared to be a few rice noodles and tiny carrot dice. They were tasty, but were more about the crunch than the stuffing. A dish of sweet-sour sauce with a dab of hot Chinese mustard built in another layer of flavor.

Hot and sour soup ($3 for a cup, $5 for a bowl) was thick and loaded with ingredients: small cubes of silken tofu, strips of bamboo shoots, tiny frilly handkerchiefs of egg drop, strips of carrots and two kinds of mushrooms — cubed button and strips of wood ear. The light-brown, cornstarch-thickened broth was properly spiced with traditional hot-and-sour flavors of soy sauce, vinegar and pepper. In lieu of the standard chow mein noodles, it came with delicious, crunchy, crispy, fresh-fried wonton squares that were hard to resist.

Cumin lamb ($17) is one of our favorites. A representative dish of the Muslim Uighur minority in the Xinjiang province of far northwestern China, it’s a potently spicy and aromatic stir-fry with meat, onions and peppers in a thick, scant brown cumin-scented sauce. Joy Luck’s version was colorful and attractive, lovely to behold and well prepared, rather dry, not too heavily sauced. Inch-square, thin pieces of meat seemed to have been velvet-ized with a flour coating, nicely stir fried to well-done. Everything about this is good, but there was one problem: We couldn’t detect a hint of cumin, and, of course, when you order cumin lamb, cumin is what you come for. Okay, you come for cumin and lamb. So, a delicious dish, although a great meat-and-vegetable stir-fry, was short on its key ingredients.

Mapo tofu ($12), another favorite dish — and the only vegetarian entree on Joy Luck’s Specialties menu — was colorful and flavorful and good to eat. Although ubiquitous on Chinese restaurant menus in the U.S., it too, traces its history to the Chinese mainland and, in fact, to a specific restaurant in a specific year. China Daily tells the story: It was created in 1862 during the Qing Dynasty by a couple surnamed Chen, who ran the tiny Chen Xingsheng near Wanfu Bridge in north Chengdu. Ma Po means “pock-marked old lady,” a rather rude joke Mr. Chen played on his bride.

Joy Luck’s is a simple version, featuring lots of silken tofu cubes swimming with peas, diced carrots and barely-cooked zucchini crescents in a fiery brown-bean paste sauce, with red-pepper flecks, well, pocking the tofu and veggies. Like the cumin lamb, it was good. Also like the cumin lamb, it seemed a bit one-dimensional, without the expected complexity that Sichuan peppers impart.