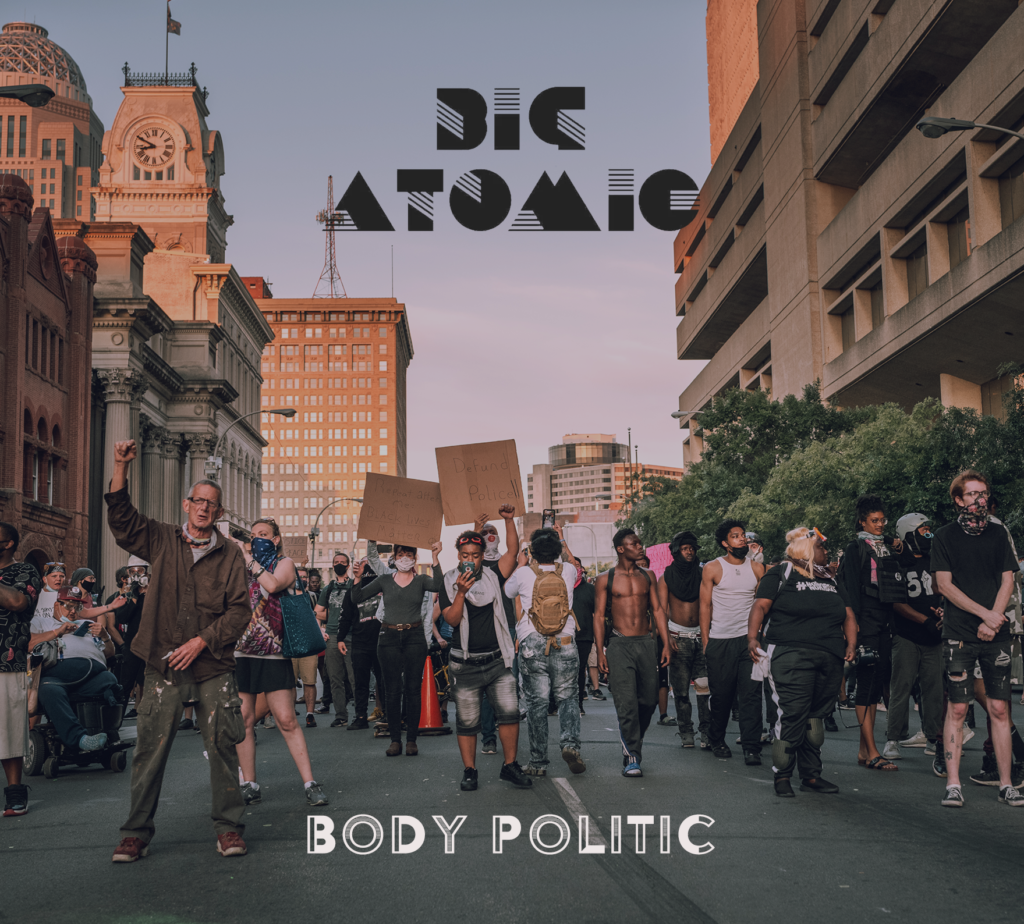 Friday, June 25 was a banner day for Louisville-based Big Atomic. With the release of a new album and video, a concert and a GoFundMe campaign committed to social change, this is a band on a mission. Rising out of Western Kentucky in 2013 and relocating to Louisville in 2016, Big Atomic incorporates elements of funk, rock, jazz, ska, soul, big-band horns and even bluegrass. However, it is more than music that drives Big Atomic.

No strangers to social activism, the band’s forthcoming EP Body Politic was inspired by the peaceful protests that took place throughout Louisville last summer in the wake of the death of Breonna Taylor. Several members of the band have been regular participants in these protests.

“I’ve been involved in activism since Occupy Wall Street,” said lead singer Shannon Vetter. “And, after a long summer of protests in 2020, we were trying to figure out ways to continue our activism through art.”

Body Politic faces the harsh truths of a city and world shaped by injustice, struggle and a global pandemic. The album’s first single, “Justice Denied,” dropped in May. Variations on that theme continue with the second single, “Trust,” which dropped June 25, accompanied by a video shot in West Louisville.

“We shot this music video on top of an abandoned building,” Vetter says. “There are a ton of abandoned buildings around that area — It used to be a thriving part of the city. There are a lot of cities across America like that. So much of the song “Trust” is about the decline of the American Dream.”

“Trust” is an important song for the band; it features backing vocals by Kiana Del of Kiana & the Sun Kings. As if the single, the video and the album all dropping on the same day weren’t enough, the band capped off the day with a concert at The Enchanted Forest in New Albany.

In addition, the band’s ongoing fundraiser, which has helped raise money to fight for racial and social injustice/equality, concluded on the 25th. Launched as a GoFundMe page by the band, the campaign benefits the local nonprofit organization Change Today, Change Tomorrow, which focuses on providing access to resources, education and community engagement to all African Americans in the Greater Louisville area.

While one of the band’s goals is to be playing the festival circuit, do not look for them to cut back on their activism. On the contrary, it is very important to the members of Big Atomic to keep fighting the good fight. Through their music, they are helping keep the call for social justice alive.

Big Atomic consists of Shannon Vetter (vocals, guitar, saxophone), Ben Vogepohl (drums), Connor Powell (bass), Michael Vettraino (guitar/ vocals) and Brandon Bell (saxophone). Renowned Louisville photographer Jon Cherry, who captured so many powerful images from last summer’s protests, worked with the band on the amazing photographs for Body Politic. The EP is available at big-atomic.com and is streaming on Spotify, YouTube and iTunes. You can catch the video for “Trust” on YouTube. •