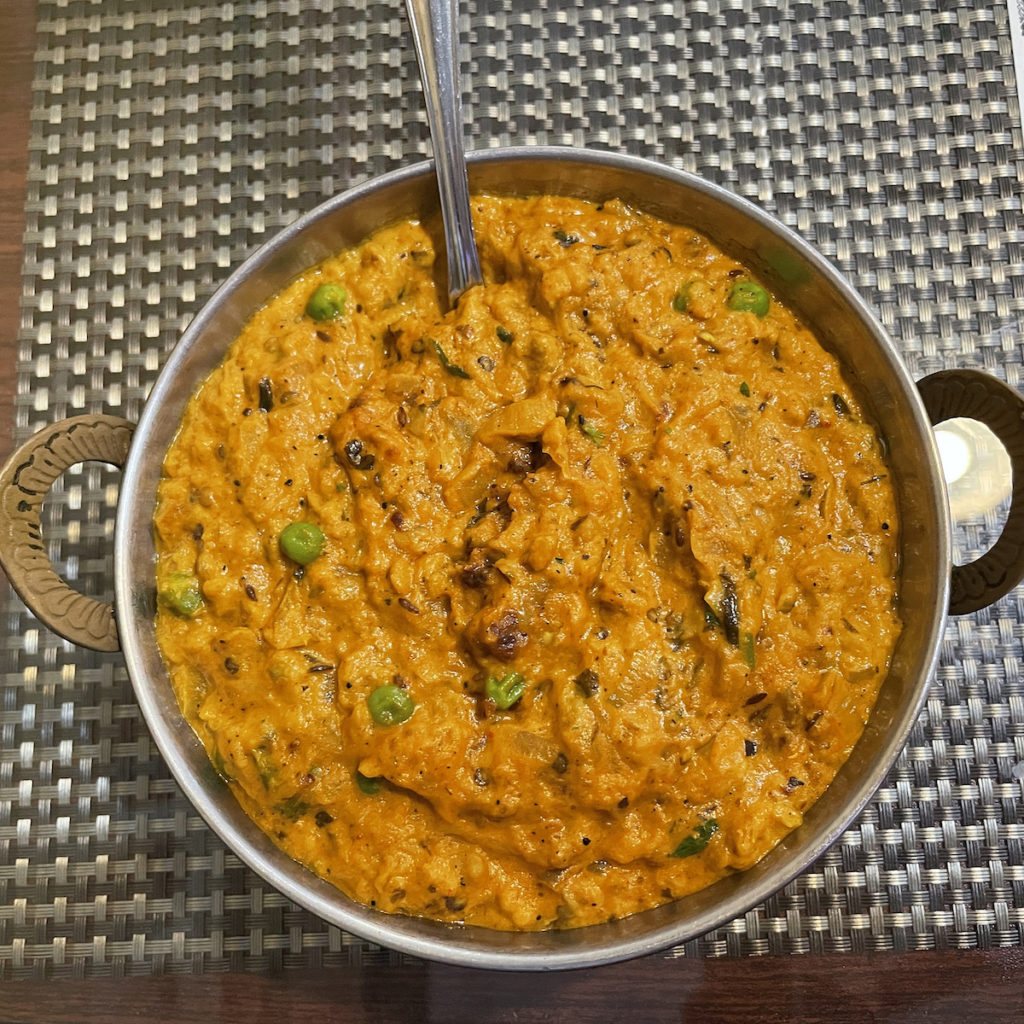 Clay Oven's baingan bharta, a deliciously spicy roasted and mashed eggplant curry, has its roots in the Punjab in far northern India.

Let us take a moment to mark the virtual extinction of the all-you-can-eat buffet. Rendered terrifying by the pandemic and images of contagious hands dipping into communal pans, the restaurant buffet has all but disappeared from our lives.

I won’t mourn it much, with a solitary exception: I miss Indian restaurant buffets, and you should, too. My reasoning on this is simple: A lot of people are still discovering Indian food, and the buffet makes it easy. Even if you don’t know the difference between aloo and bhindi (all right, potato and okra), you can learn a lot by grazing the buffet. Try a little taste of this, a dab of that, and before long you’ve gotten to know the cuisine.

We can’t do that now and won’t for the foreseeable future. But we can still toughen up, head for a good Indian eatery like Clay Oven in Middletown, and figure out how the menu works and what to look for while the buffet remains under wraps.

I hadn’t been back to Clay Oven since I reviewed it in 2013, shortly after its arrival. It was good then, but I’d rate it as an even brighter star in the Indian-restaurant galaxy now. Everything we tried was well prepared and delicious.

So let’s have a look at that menu. As a pandemic precaution, by the way, they’ve placed the extensive menu under the glass cover on every table. The menu reads “aromas of the Himalaya,” and the restaurant websites add, “Louisville’s very own source of authentic Indian and Nepali cuisine.” Clay Oven’s Facebook page, on the other hand, promises “exceptional Indian dishes from all regions of India.” It appears to me that it’s both: The basic dishes of the Indian canon are included for sure, but you can also choose regional dishes focused on India’s mountainous north.

Absent the buffet, it’s not a bad idea to look over the menu online before you go. It looks complicated, with its front and back both covered with three columns of dense, tiny type. But spend a little time with it and you’ll see that it breaks down into simple categories that are easy to understand.

After appetizers, soups, salads and an array of Indian breads, the 60-some entrees break out into chicken, lamb, seafood and vegetarian sections; biryani and pilaf rice dishes; Indo-Chinese dishes that blend Indian, Nepali and Chinese flavors; and the restaurant’s specialties from the namesake tandoor clay oven.

With few exceptions, main-dish prices are tightly clustered between $11.99 and $17.99. Most entrees come with long-grain basmati rice — be sure to specify if you want your dish mild, medium, hot or Indian hot. You can trust them to spice it as you like it.

Speaking of spice, I like to accompany my Indian meal with a lassi, the Indian drink that’s basically a tall glass of yogurt whipped with a little water and either fruit — mango is popular — or salt and spices. Dairy is the best antidote to fiery fare, so it’s hard to beat a lassi when you plan to order your dish above medium.

Clay Oven’s salty lassi ($2.99) was exceptional, among the best lassis I’ve ever tried. Rich and thick, served cold, it was flavored with lots of cumin and whiffs of cilantro and coriander seed.

Papadum, crisp lentil wafers, are often served as a starter with spicy chutneys, the Indian eatery’s answer to chips and salsa. The menu lists a plate full for $2.99, but our server offered them complimentary. They were grease-free, perhaps baked rather than fried — salty, crisp and delicious. Tubs of onion and cilantro-mint chutney were served on the side.

An appetizer order of vegetable pakoras ($3.99 for six pieces) also hit the spot. These appetizing ping-pong-ball-size onion fritters were freshly-fried dark brown, crunchy and spicy. Deconstruction revealed plenty of onion strips bound in a savory batter tinted orange by a mix of spices.

Seekh kebab ($14.99) made a memorable main course. It’s a kebab made from ground lamb and aromatic spices that impart a bold red color. The ground, spiced meat is molded around a skewer in a sausage shape and cooked in the tandoor, then cut diagonally into about eight pieces. The meat was plated under large strips of spicy, juicy white onion and red and green peppers, also tinted red from the tandoor. It was ordered mild and came that way, with sides of basmati rice and rich, buttery dal makhani and red-bean stew from the Punjab.

Baingan bharta ($11.99) also traces its roots to the Punjab in far northern India. It starts with a whole eggplant that’s roasted in the tandoor until it’s tender and smoky. Then it’s mashed and sautéed with onions, tomatoes and plenty of garlic. I asked for “hot but not Indian hot,” and it imparted a wonderful endorphin rush that was plenty for me. The lassi, plenty of rice and a generous portion of puffy, tandoor-browned garlic naan bread ($2.99) brought it into line.