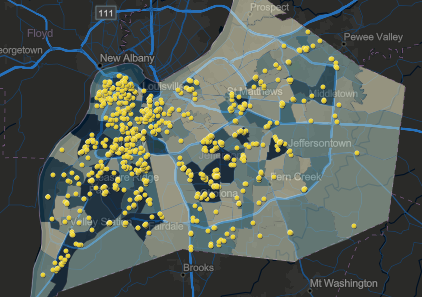 A map of all eviction judgments in Jefferson County from January-March 2021. Courtesy of Root Cause Research Center.

Evictions are still happening in Louisville during the pandemic, and two recent reports highlight just how severe the problem is.

Root Cause Research Center’s Spring 2021 eviction report found that 888 eviction judgments in which the tenants were found guilty have been handed out in Jefferson County District Court since the start of the year, totaling 2,260 since March 2020.

The Metropolitan Housing Coalition’s 2020 State of Metropolitan Housing Report: COVID-19 and the Struggle to Stay Safe at Home in Louisville KY found that while evictions are down, they are just now in line with pre-COVID, national levels, and judgments are still being ordered at a rate that looks similar to what was occurring prior to the pandemic.

The reports explore different aspects of evictions in Jefferson County and propose divergent solutions, but they both emphasize that the government has fallen short in ensuring that people remain housed during the COVID-19 crisis.

“It’s something that we should really be ashamed of and concerned about as a city,” said Josh Poe, co-principal investigator for the Root Cause Research Center.

The current state of eviction protections for Kentuckians include a federal and state moratorium on evictions for nonpayment of rent. The federal government has also directed millions of dollars in funding for eviction prevention assistance, which is being doled out in Louisville via Metro government.

But, there are gaps through which tenants are falling: Both renters and landlords have to submit paperwork to be protected from eviction and to receive the money. When one party doesn’t for whatever reason, the deal falls apart. Advocates also believe that some landlords are circumventing the moratorium by filing evictions for tenants who are not paying under other pretenses, such as lease lapses or for nuisances, such as noise and trash.

The pandemic has “exacerbated housing insecurity and long standing racial and ethnic disparities” in Louisville, according to MHC’s report.

“We think that the court has spoken on at least the ability for the court system to hear those cases,” said Beshear. “So, at this point we believe that the moratorium that we have on mirrors the federal one, it’s what’s available under law, and we’re going to continue that. But, please take advantage of the eviction relief fund. I don’t think anybody ought to be able to be kicked out on the street in the middle of COVID.”

On Wednesday, a federal judge ruled that the U.S. government had overreached in enacting its eviction moratorium. President Joe Biden’s administration said it was reviewing the ruling.

Root Cause, which is a grassroots group, started a project called the Louisville Eviction Lab last year with a couple of goals: to create policy change and to organize tenant power.

The organization also believes housing is a right and the appropriate response from the government would have been to cancel rent completely during the pandemic. The government is helping businesses more effectively than regular people, according to Louisville Eviction Lab co-founder Shemaeka Shaw.

“[Landlords] have been bailed out over a moratorium: bail out. Eviction prevention funds: bail out. PPP loan: bail out. SBA loans: bail out. The mortgage companies: bailed out. The only ones still standing there, holding the bag and getting homeless: Tenants,” said Shaw, who is also the founder of the Broken Hearted Homes Renters Association.

Root Cause’s data can be viewed on its website in map form, showing each property in Jefferson County for which an eviction judgment has been ordered since the beginning of the pandemic. The map shows a concentration of evictions in The West End and central neighborhoods.

Root Cause’s Louisville Eviction Lab has been collecting Jefferson County eviction data from the Administrative Office of the Courts. The grassroots organization cleans up the data, such as removing duplicate entries.

The organization has also kept tabs on the top evictors in Louisville and the top recipients of federal funding. In some cases, those categories have overlapped. One significant example is Broadway Management, which manages around 2,500 rental units throughout Louisville, making it one of the largest property management companies in the city.

In an email, Broadway President Greg Popham said that the company has been “diligently” trying to steer tenants to apply for eviction prevention funds, but some residents have not made the effort to pursue that money. He said he was surprised by Root Cause’s numbers and thought it might have something to do with the large number of rentals that Broadway manages.

“We manage properties for multiple owners that have mortgages and expenses to pay and we therefore need to move forward and regain possession of the property when residents do not pursue help,” he wrote. “Help is out there and residents just need to reach out and ask for it and we are trying to assist in that effort.”

Louisville Metro’s Director of Housing Marilyn Harris said that Broadway “bends over backwards” to help tenants during the pandemic. Popham said that, before filing for eviction, his company will send a letter and call residents two or three times, asking them to apply for eviction prevention assistance.

Poe’s response to Popham’s emailed statement was, “If people are eligible for rental assistance but are still being evicted, maybe Broadway Management should stop evicting them.”

Root Cause Research Center, along with activist Phelix Crittenden, who has been managing an eviction court watch program throughout the pandemic, are encouraging Broadway Management tenants to reach out to them with any issues they’d like to discuss with fellow tenants: [email protected].

Root Cause will be releasing updated eviction reports on a quarterly basis.

The Metropolitan Housing Coalition’s latest report measures the impact of the pandemic on evictions throughout last year.

“The fact that this is actually continuing to go on during a pandemic, you know, is of real concern, and I think it really reflects the limitations of the moratorium,” said Cathy Kuhn, the executive director of the MHC.

2020’s warrant rate, or the number of judgments that resulted in a warrant for possession of the property (executed by the Jefferson County Sheriff’s Office) was also almost as high as normal. Warrants can be granted if the resident of the property doesn’t leave within seven days.

There have been 249 set outs executed so far in 2021 as of March 31, according to recent data from the Jefferson County Sheriff’s office.

Louisville Metro Government could make some changes to handle evictions better, Kuhn told LEO. MHC’s report called for a right-to-(legal)-counsel program for tenants. Louisville Metro Council recently passed a right to counsel ordinance for families only. Kuhn would also like to see an option for tenants to receive eviction prevention funding if their landlords refuse to apply for the money.

Some landlords have declined to apply for eviction prevention assistance because they do not want to submit information to the government. Others have told Metro that the process to receive the money takes too long, according to Marilyn Harris, the director of housing for Louisville Metro government.

But, there are advantages to giving the money directly to the landlord, said Harris. The city can then require that landlord to agree to certain protections for the tenant. Currently, that includes the dismissal of all late fees, fines and penalties, as well as a time limit on when the landlord can legally file for eviction again.

The city is also working with tenants whose landlords refuse to apply for assistance, she said. So far, Louisville has received around $44.9 million in federal funding for eviction prevention assistance and spent around $42 million. Another $18.2 million is coming, said Harris.

Another step that the government could possibly take would be to expand the eviction moratorium to include all evictions instead of just banning those for nonpayment of rent, said Kuhn.

Mayor Greg Fischer’s office has released an opinion from the Jefferson County Attorney, stating that Fischer does not have the authority to do so, because he is preempted by the governor’s eviction order. But, the Kentucky Equal Justice Center, a legal advocacy group, released its own blog post, saying that it believed Fischer could, because the CDC gives local entities the ability to institute their own COVID protections. In its Spring eviction report, the Root Cause Research Center also called for Fischer to expand the eviction moratorium.

The Kentucky Equal Justice Center has also asked for Gov. Beshear to close a loophole that landlords can use to evict renters for other reasons beyond nonpayment of rent. Those include engaging in criminal activity and violating any applicable building code or similar regulation relating to health and safety. But, the one that they Equal Justice Center is asking to be eliminated allows landlords to evict tenants for “violating any other contractural obligation,” which can include overstaying the term of a lease.

In Louisville, Harris said her office is doing everything it can to prevent tenants from being evicted. Last year, there were five employees and a couple of interns helping tenants and landlords apply for money, dispensing those funds and sitting in on court. This year, her office has 15 interns in addition to its employees.

But, there is one thing she thinks the federal government could do to make her job easier. Currently, a tenant has to say that they can’t pay their rent because of COVID, and they have to meet certain income requirements. Harris’ office verifies their income, but she would like for tenants to be able to self-attest that they meet the income requirements instead.

When asked about canceling rent, Kuhn said that she is not against it, but she has not seen much support for it on the national level.

U.S. Rep. Ilhan Omar introduced a bill in April 2020 that would have canceled rent and mortgage payments for home owners. It would have also established a relief fund for landlords and mortgage holders. It did not receive a vote. In March of this year, Omar reintroduced her bill, the Rent and Mortgage Cancellation Act.

Poe believes the government shouldn’t just keep pushing the problem out by extending the eviction moratorium every three months. Once the moratorium ends, he predicts a flood of evictions.

“We really have no way out of this,” he said. “Either we’re looking at mass evictions, or we’re gonna have to cancel rent.”

If you are a renter who cannot pay for your housing, go to stopmyeviction.org to start the process of applying for assistance.