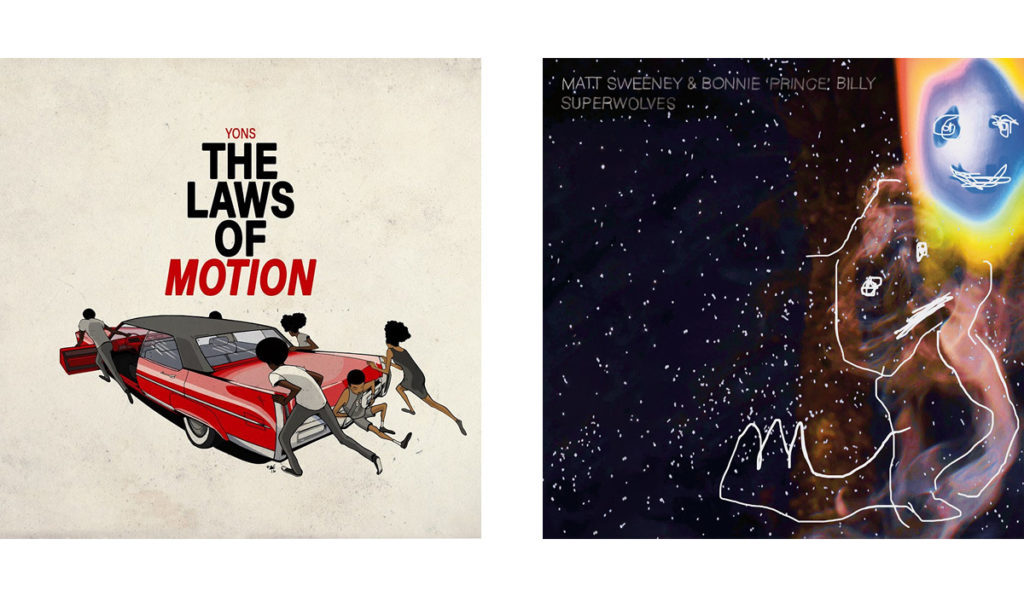 As always LEO likes to keep our eyes out for fresh local sounds. Here’s a list of six recent releases to sink your teeth into.

Matt Sweeney and Bonnie ‘Prince’ Billy — Superwolves
Guitarist/composer Matt Sweeney and Will Oldham, aka Bonnie ‘Prince’ Billy, kick off this record with an almost reverential tone, provided in part by shimmering organs. Sweeney’s guitar is murky and mercurial, from the density of his riffs to the fluidity of his solos. Oldham’s poetic croon pairs lovely with the guitar work, the perfect complement to one another. Despite lines like, “god can fuck herself,” there is an underlying sweetness to the album punctuated by Oldham’s recurring references to childhood. Songs like “My Popsicle” play more with that theme, by exploring the sonic melodrama of a child and their sweets. The overall arc of the album is about aging, growing from the carefreeness of youth to the complexities of adult life. Given the pedigree of the musicians, it should go without saying that this is a beautifully crafted, thoughtful and poignant album, ideal for listening on a quiet night under the stars.

Yons — The Laws of Motion

There is something so incredibly beautiful about the music of Yons, which is so perfectly encapsulated by the album art on The Laws of Motion. Here, you see a group of people pushing a car, the ideal representation of the community that Yons has built. The opener “The Walk” features the dulcet voice of Otis Junior. Yons is an adept producer and emcee, wonderfully building tracks at a granular level that develop and grow. Every note is in its right place, from the crackle of vinyl on “Loco Motives,” to the gospel-esque piano that propels the aptly named “Inspiration.” Did I mention that Yons is a superlative emcee? With lines like, “You ain’t shit ‘til you meet them quotas, so I hit ‘em with the two-week notice,” Yons is showing that he has bars and an excellent storytelling sense, using the track to simultaneously unpack the demoralization brought on by capitalism and the pursuit of actual happiness (re: not just material wealth).

IamIs — Lo(a)ners
It’s hard to pin down the vibe on Lo(a)ners by IamIs, although the title does a little of the heavy lifting. There is a longing to the music, an almost tragic melancholy that undercuts each of the eight tracks. The song “Paper Face” is a bittersweet reflection on loss through the lens of perspective. Elsewhere, the folk dirge of “Don’t Be Long” continues to lean into the blue, a slow and mindful look at waking up to uncertainty. Make no mistake though: This is not a bleak or inherently pessimistic or unhappy record. Instead, the band uses their various heartbreaks as a means of self-reflection, intent on finding a better way through. Throughout, there is a dreaminess that recalls the various diner scenes in “Twin Peaks,” which results in music that is simultaneously of the time and timeless pop that serves as meditations on the moment.

Noisebody — Heat
At first blush, Heat by Noisebody has a vaporwave quality, a lo-fi, hauntological ambiance that shimmers in the distance like a mirage. Transitioning from opener “Seattle” into “Inside These Walls,” the band explores driving rhythms and a Rhodes-like keyboard line that punctuates the melody. There are elements of synth-pop and electronica throughout the album, which is entirely instrumental, that recalls acts like Boards of Canada and Tame Impala. While the title of the album may imply motion, Heat moves at a leisurely pace, giving space for each introduced instrument to build and thrive. The keys are often treated like the vocal line, which provides a subconscious narrative to the album. This is a joyful occasion punctuated by chants for Black and trans lives matter on album closer “Heating Up.” All told, this is an entirely pleasant album, and one that leaves you feeling welcome, included and motivated.

French TV — All Our Failures Are Behind Us

A Louisville institution since 1983, French TV produces avant-garde prog with a flair for the dramatic. That description remains true on their latest, All Our Failures Behind Us, which opens with clean, chiming guitar tones and some especially silky-smooth horn lines. As with much prog, it’s hard to identify any single lead instrument, as every musician is given the space and time they need to breathe and demonstrate their chops. That said, this leads to some particularly long passages —not a bad thing— but makes for an album with an especially long structure. There is a playfulness to the album that recalls the work of Adrian Belew and punk prog act Cheer-Accident. Understand that, while there is plenty going on here, it never feels overwhelming, like baroque compositions as filtered through the work of Frank Zappa.

Nmesh — Appearance Settings: Volume 01 (2009​-​2015)
As the name suggests, Appearance Settings is a collection of tracks from an assortment of compilations over the years. The opener “Terminal Interface (Shortform)” establishes a subdued tone that isn’t quite what plays out throughout the approximately 78 minutes running time. Instead, Nmesh pulls from his various tool sets to create a career-spanning pastiche. There’are the obvious moments of vaporwave haze, like a heavily filtered Sade, cut with blasts of breakbeats that would make Squarepusher blush. The sample clearances throughout the album are dizzying, to say the least — a collage of sounds from across genres, chopped, screwed and scrambled into something psychedelic and fresh. While not a proper album, there is a cohesion to the releases that lends itself to a long and deep listen, whether that’s from trying to identify the various sonic Easter eggs, or just soaking in the atmosphere.