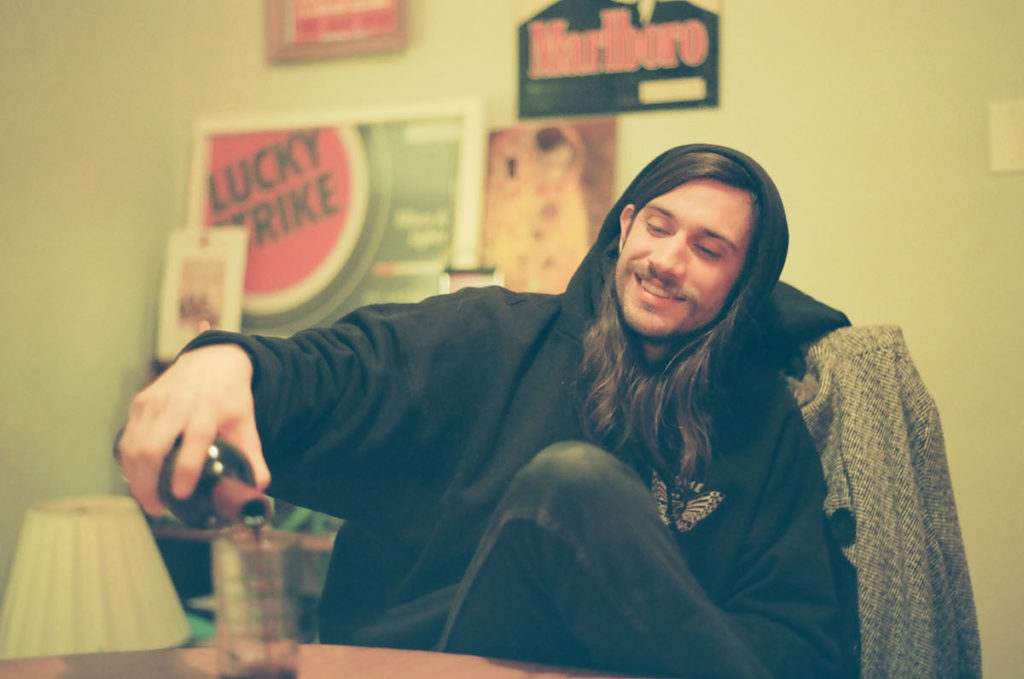 It could be argued the heyday of the acoustic songwriter ended sometime after the early 1970s. Disco became cool, and synths and electronic samples dominated the 1980s soundscape, leaving a gaggle of front-porch troubadours and their trusty six-strings hanging out to dry.

Louisville musician and singer-songwriter Sam Filiatreau, 26, defies this narrative with his eponymous solo debut, Sam Filiatreau, an album that crackles and pops with all the charm of an inherited vinyl record. Filiatreau attributed the album’s traditional feel to his love of folk music and songwriting.

“I, at the core, am just a songwriter,” Filiatreau said. “Folk music and songwriting is me.”

Recorded over three days in May 2019 in the gutted living room of a remote cabin in Hocking Hills, Ohio, the album is marked by its simplicity, featuring primarily just acoustic guitar, bass, drums and Filiatreau’s steady drawl across its eight tracks. Accompanied throughout by musicians Taylor Meier and Matt Vinson of Caamp, an Ohio-based folk trio with an Appalachian bend, Filiatreau said all recording was done with a “loose” approach to maintain the wild spirit of the location and moment.

“We weren’t rushing anything,” Filiatreau said. “We were just literally living with the record.”

Before any recording even took place, the three grabbed some beers, and Vinson and Meier, who also produced the album, asked Filiatreau to perform some of his favorite original songs acoustically outside of the cabin. This helped them decide which songs to record and also how Vinson and Meier could best accompany the music.

“We got there, we figured out the songs that we were gonna cut, and we kinda jammed through them, figured out how we liked to play them and then just hit record,” Filiatreau said.

Both Meier and Vinson, who performed drums and bass on the tracks, respectively, were hugely important to the arrangement, sound and feel of the album. Filiatreau said that hearing his own music for the first time with backing instrumentation was immense.

“To finally hit record and hear more instruments coming back, it’s like, ‘Whoa,’” Filiatreau said. “I think we did what we were supposed to.”

Filiatreau initially crossed paths with Meier and Vinson at a Louisville house show organized by a mutual friend on Valentine’s Day 2019, performing an acoustic set of original music in between their respective solo sets. Vinson said he and Meier were immediately drawn to Filiatreau on account of his songwriting, performance and overall good nature.

“When we came down to Louisville and did the show, it was just like, you know, socks off,” Vinson said. “Tay [Meier] and I looked at each other from across the room and were just like, ‘Woo, this is really, really unique and fresh.’”

Vinson said he and Meier soon after walked outside for a smoke and decided on the spot they wanted to record an album with Filiatreau. Meier said Filiatreau’s talent for authentic writing was unmistakable.

“The first thing I noticed about him just as a person within his songs and songwriting too was just the honesty,” Meier said. “It was just effortless.”

“I love lyrics,” Filiatreau said. “I’m excited to be playing a genre of music to where it seems like that will be the focal point for a little bit.”

Filiatreau said the album’s closing track, “Fine By Me,” is his most proud lyrical accomplishment on the record. Written without a chorus, the song is composed of three verses, each describing a unique stage of love through the eyes of an aging couple. From smoking joints and taking refuge in bed from a house full of kids to accepting the inevitability that one must pass away before the other, Filiatreau said he wrote the song after contemplating his own experiences with love.

“It’s just taking one little piece of love that I have experienced and thinking about where it’s gonna go in a perfect world,” Filiatreau said.

Since recording the album, Filiatreau became the first signee to Gjenny Records, Meier’s newly founded record label, in April 2021. The label released Filiatreau’s first single, “Wrecking Ball,” to streaming services on April 22 and will release his full-length debut on June 1.

Though Filiatreau remarked he’s excited to finally share some of the music he recorded nearly two years ago, he remains focused on all the work still in store, such as finalizing tour dates and promoting the album.

“The success has not come yet,” Filiatreau said. “We’re just on our way.”