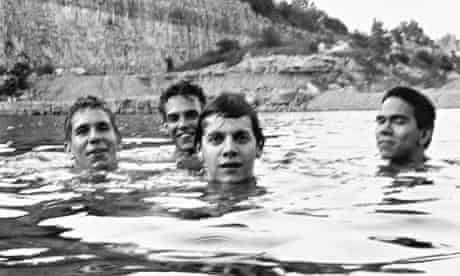 Image from the cover of Spiderland.

In the seven or so years I’ve been in town, I’ve been impressed by how local musicians of all ages seem to have an encyclopedic knowledge of Louisville music history. People who were in grade school or not alive in the early ‘90s will namedrop Louisville musicians from that era into causal conversations and in interviews. And the stories and perspectives from the people who were there are always evocative, painting a picture of a much different scene than todays. One of the records that constantly gets brought up is Slint’s Spiderland, which just passed its 30th birthday in March. The record, which is a grenade of creativity that put a mirror up to human volatility, was released after the band broke up, but, through the years, it’s slow-burned its way into the ears of indie kids across the globe.

Todd Brashear, Slint’s bassist on Spiderland, recently told LEO that it’s up to the listeners to determine what qualities fuel the album’s lasting impact, but he said hard work and having the right people in the right place made it all possible: “Some people get lucky and they’re amazing right out of the gate, but we all played in a lot of bands over the years. Britt [Walford, drummer] and Dave [Pajo, guitarist] were technically great musicians — still are — but me and Brian [McMahan, vocalist and guitarist] weren’t, still aren’t, but we had been around the block, and, I’d say, made the most of the skills that we had. But, sometimes, there’s… I’m going to use the word magic. You just get the right set of people together and sometimes something cool might happen.”

Sonically and lyrically, Spiderland lives at the corner of multiple juxtapositions: visceral yet technical, emotional yet controlled, weird yet accessible, mysterious yet direct, and, of course, loud and quiet. It’s undeniably an important and singular record in rock history, but one of the reasons we’re probably still talking about it three decades later, is that most of us are still working on the puzzle. Because of Spiderland’s prominence and influence, I spoke with Louisville musicians from multiple eras about the record.

Scott Ritcher, Sunspring (1990-1994), Metroschifter (1994-2005), owner of Slamdek Records: In the late 1980s and early ’90s, groups like my band Sunspring were still playing odd brands of punk rock and just beginning to experiment with dissonance and uncommon time signatures. Slint was showing us how much could actually be done. They were making the move from the chaos of punk to something that combined art, forethought and control. It seemed so educated. They weren’t going in a new direction, they were taking a big step up. Appropriately, since they were a couple years older, it seemed like they were graduating. The band found entirely new uses for guitar harmonics and, in contrast to their Louisville contemporaries, they dared to sometimes play as quietly as they could. It wasn’t long before we were all stealing these new colors off their palette. What was most shocking to us when we were first met with Spiderland was the emotion. We thought of these guys as brilliant technicians, yet here they were unabashedly exposing a raw, fragile vulnerability. Our music was about emotion, we thought, but just as Slint had previously shown us how much more was possible musically and sonically, now they were showing us colors we could paint with lyrically and emotionally. In contrast to Tweez, Slint became acclaimed and revered for a whole different set of things they did on Spiderland: songs that are urgent and uneasy, yet methodical; lyrical performances that exhibit a bare, undefended innocence; rhythm patterns you’ve never heard before, but quickly tap your foot with; control over the guitar that can finesse it from being delicate and barely audible to the teapot squeal of a hole in a dam that won’t burst.

Heather Fox, Juanita (1993-present): Back in those days in particular, we were very much about DIY and making noise and dressing up and having fun, so we were the opposite of highly-detailed, must-sound-a-perfect-way — I didn’t always tune my guitar and stuff like that. I didn’t have my own gear for years — I’d just borrow other people’s shit. In style, we could not be further from each other… I think the reason [Spiderland] has had such an impact though, is because it’s a beautiful record, it’s an incredible record, it’s really intimate. And I think it really captures a certain — I believe the word angst is overused — but it definitely captures a certain uncomfortable quality about being that age. What it feels like to be in your late teens / early twenties. Which, I’m glad I’m at the age I am now. I wouldn’t want to go back and be 20 years old.

John King (Operator of the label Louisville Is For Lovers (2000-present), musician in several bands): It is no small coincidence that Slint’s Spiderland was released the same year I announced to my mother that I had decided to be a musician and demanded a drum set immediately. I was just 14, but was already well rooted in the local music scene. In those days  local music was everywhere. I could walk from my house in Germantown down Preston Highway and see Sunspring, Erchint, and Ennui at Audubon Skate Park, or take the Eastern Parkway bus to Bardstown Road and see Rodan and Crain play matinee shows at Tewligans. Sometimes Jeremy DeVine’s grandmother would drive us to Lazer Blaze in the East End to bands like Evergreen. I could never figure out the nation’s infatuation with the Seattle music scene at that time because it seemed like Louisville was inventing new bands and musical genres on a daily basis. It was exciting to head out to a show to discover the newest sounds. But, with all that creativity, Spiderland was something no one had heard before. It didn’t seem to fit in the normal trajectory of musical evolution. It seemed no matter what scene you were in, someone was talking about Spiderland. It had the aggression of hardcore with the fragility of lo-fi folk, and the attitude of shoegaze. It was simultaneously a dozen different genres and none of them, and it was all ours. We knew it was an important album, and it didn’t come from New York, or L.A. or Seattle. It was Louisville through and through. And for me the best part was Britt Walford’s drumming. It doesn’t matter if he’s playing on a Will Oldham record, a Kim Deal album or a raucous Squirrel Bait record, you know it’s Britt. He has a distinctive style, which as a drummer I can say that isn’t easy to pull off, and nothing represents his full talent more than Spiderland. The way he is able to seamlessly move from loud to quiet, change tempo and make the most sparse sections of a song intriguing and full of emotion is nothing short of genius. The entire 40 minute album is tied together by Britt’s beautifully-crafted beats culminating with the exquisite “Good Morning, Captain.” And, before the world knew what hit it, it was over.

Jamie Colvin (Kentucky Chrome Revue, 2009-present): I didn’t listen to Spiderland until a couple of years after it came out and I stole my older sister’s cassette tape. It took me a bit to get into it, but ‘Good Morning Captain’ was the song that hooked me in. Something about that bass line… Today, it’s complete and total nostalgia of those carefree lazy days and laying on the floor of your room listening to an album while staring at the ceiling and getting just utterly lost in it. It holds up and will never lose its appeal.

Scott Carney, Wax Fang (2005-present): I think that is the hallmark of a great piece of art — that it stands the test of time, that it continues to influence people across generations. And that album certainly has. I first heard it in high school, probably when I saw the Larry Clark film ‘Kids.’ It wasn’t really my cup of tea at the time, and then I kind of circled back around as I was transitioning into college… It’s kind of this magical thing they created that hadn’t really been done in that way, shape or form before… It’s kind of a more artistic approach to music and it’s not necessarily music produced for the masses. That really resonated with me because, when I first started hearing those bands, it really kind of introduced me to the idea that rock music could be more than just a handful of power chords that you play for three minutes and you move on to the next song.

Nick Wilkerson, White Reaper (2014-present): They are just so singular. When I think of Louisville, I think of Slint. And vice versa, pretty much. It’s a weird thing, I don’t know how to explain it thoroughly… If I learned anything from listening to that record, or listening to Slint in general, I learned to be as you as possible, basically… The whole scene back then was just so cool. Their trajectory of being in punk bands before Slint — I feel like I did all of the same stuff growing up, playing shows, without even being aware of that. It’s cool there’s an example of some guys that thought the same way I did back then. I think it just captures the sense of growing up, the record.

Doug Campbell, The Sleeping Bag (2018-present), Melanchoir (2020-present): The very first time I heard Spiderland was not a life-changing moment. It took me years to form a full opinion on the album, and while I ruminated on it and continued making my own art, I was certainly becoming influenced by it more than any other favorite album of mine. As I would continue to pick out new things I had missed on repeated listens, I found myself more focused on creating thicker layers of detail in my own work. There is an indescribable quality to its plain presentation and production style, and how that’s contrasted by the ever-evolving passages of tightly-performed and forward-thinking music, and then (because maybe those two things aren’t enough, and traditionally sung vocals would be too predictable) there’s this seriously fucked up narrative running through a good deal of songs on the record. This story of sorts deals with themes of paranoia on “Don Aman,” child abandonment on “Washer” and the hair-raising horror of dying alone, full of regrets, on “Good Morning, Captain”… pay even closer attention and you will realize that this story creates a perfect loop as the very first lines of the first track make reference to the last track. When I first put all of that together, it didn’t just change the way I approached music, it changed my life.

Tallulah Lynch, Shark Sandwich (2020-present): Every time I listen to it, I find something new, which is weird because it seems so straightforward the first time you listen to it. It’s like, this is just a really relaxing, low-energy thing but there are a lot of layers to it, which is why people keep coming back to it… I think one of the reasons that I like that record so much is it changes with whatever head space I’m in. Anytime I listen to it, in whatever mood, it changes the whole perspective on the album, which is really great. Not a lot of music does that, for me at least. •

Editor’s Note: To dive deeper into the history of Spiderland, check out Lance Bangs’ documentary “Breadcrumb Trail” or Scott Tennent’s 33 1/3 book on the record.