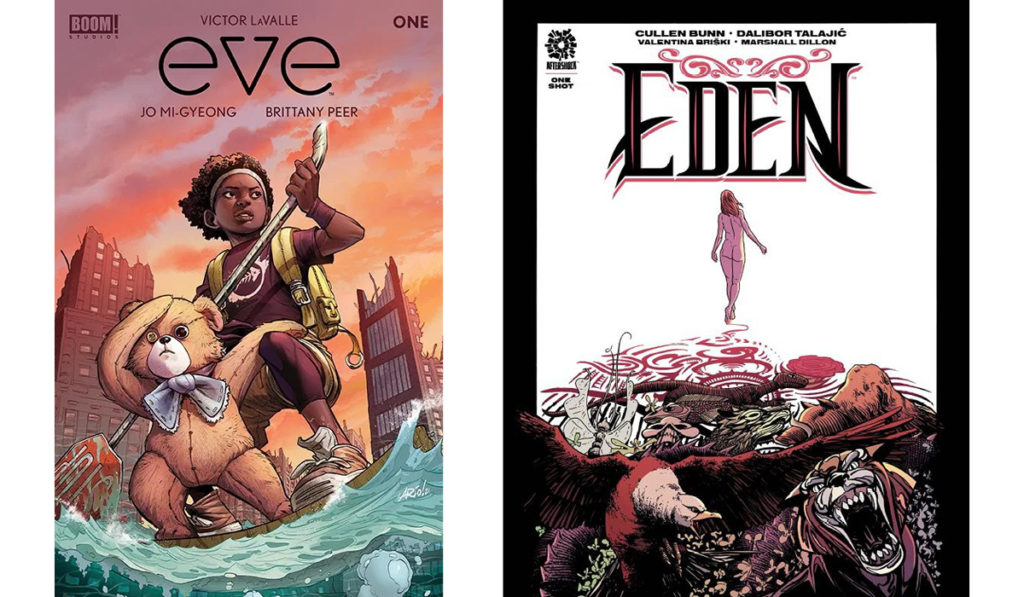 “Eve” No. 1 begins with an eleven year old girl named Eve enjoying the beauty of the island she loves and has grown up on.  When her father calls her home for supper, they decide on Jackson Square in New Orleans for where they want to eat.  A large screen around the table changes to show the familiar place. This gives us the first hint that something more is going on than we’ve been led to believe.

Writer Victor LaValle’s wife is a non fiction writer, specializing in climate issues. This book’s theme is very much inspired by her writing, obviously, as we follow Eve on her journey, first meeting a teddy bear who is actually an android designed by her father to help her on the mission she’s just now realizing she’s been preparing 11 years for. The future of Earth seems to depend on her and her companion navigating the flood waters of the remnants of America. Hopefully, the second issue will give more insight into what exactly her mission is, not only for us as readers, but for Eve herself as a character in this fictional world. At least, it’s fictional for the moment. Let’s hope we can keep it that way.

Sometimes it takes meeting the right person to brighten your world. “Eden” is the story of Niles, a lonely tattoo artist who has fallen into a depression pit following the loss of his wife and child. Day in and day out he does the same tattoos, goes to the same bar, eats the same takeout. This all changes when a new customer, Eden, shows up at his shop for a walk-in appointment. She leaves quite the impression on Niles when she requests for him to design her unique butterfly — the one stipulation being that he has to tattoo it with no preliminary sketch.

However, when she stops by for a second tattoo several weeks later, the butterfly has vanished.

Even as Niles falls for this mysterious and charismatic woman, he finds himself searching for answers that she refuses to give. Eden swears up and down that she loves the results, yet time after time they disappear from her skin. When he finally takes it upon himself to dig up the answers on his own, what he discovers changes his life forever.

“Eden” starts out as a pretty standard (though rather grim) slice-of-life style comic, detailing the lonely life of tattoo artist Niles. Eden introduces a layer of magic to it, which eventually takes a turn towards body horror. While it seems to be a story of love and healing, this self contained one-shot twists into a shocking culmination of events.