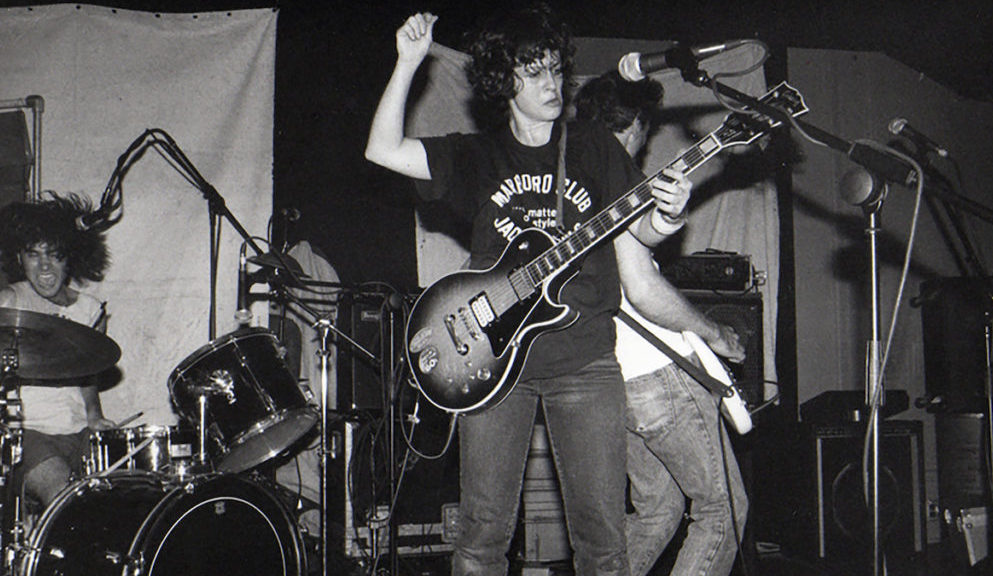 Antietam at the New Music Seminar in 1991. Photo by Bruce Warren

Antietam was formed in Louisville in 1984. By the ’90s, they had moved to New York City. However, once a local band, always a local band. They released their album Everywhere Outside in 1991 after welcoming new member Josh Madell. They talked about how the album came together.

Tara Key: Post-Burgoo, while deciding which zig or zag to follow, Tim and I waited for what was next. A call came from a NYC kid, now a bike messenger in San Francisco. Josh Madell, 20, was willing to come home and try out for our band. He had heard us and owned Burgoo and liked us. One December Sunday morning he pulled up at our corner, and we piled into his car, establishing a ritual that has gone on for over 30 years now, headed for the Music Building where we practice to this day. We jammed for literally 30 seconds and knew it was right.

Josh Madell: I left New York for college in ’88, and left college for rock and roll in ’89. I ended up in San Francisco because I wanted to try someplace new, but after a couple of years, my band seemed to be at a dead end, and I was sort of burned out on SF too. Ken Katkin told me that Antietam needed a drummer; he knew that I loved Burgoo, and I flew back to New York for a few days to see the parents and audition.

I quit my job, packed my apartment and headed east on Christmas day in my creamsicle-colored VW bus, my drums and everything I owned piled behind me, on the southern route across I-40 to avoid the Rockies and the winter snow. No such luck, I hit blizzards at every turn, the bus had no heat or defrost (literally none, it had been disconnected), and it was rough riding. I finally slid off the road and fell over outside of Amarillo, but the giant snowdrifts padded my fall, and I was rolling again in a few hours. On New Year’s Eve in North Little Rock the bus gave out, and I spent a couple of long, empty days waiting for a mechanic, and a part. Days later, I limped into a friend’s place in D.C. and stole out of town on the Amtrak with just my drums and a knapsack; the Everywhere Outside sessions were already booked, and I had a lot of songs to learn.

TK: So with Madell in, we practiced fiercely and five weeks later found ourselves recording Everywhere Outside at Water Music in Hoboken. We worked with John Siket, who would go on to helm many noteworthy sessions. John was probably the first engineer I tortured as I gained confidence (or arrogance) in the studio. There was a tightrope spirit to the sessions, with the ink still wet, that was turbo-charged and exhilarating. And listening to the tempos, it would seem we all had hearts that beat at a hummingbird’s pace. To finish, I kept John up 24+ hours straight: a 20-hour mixing session followed by him driving Josh and I Grand Prix-style, very late, to the mastering studio where, finally, I passed out in front of the monitors on the floor (quite professionally) while John and Josh mastered the record.