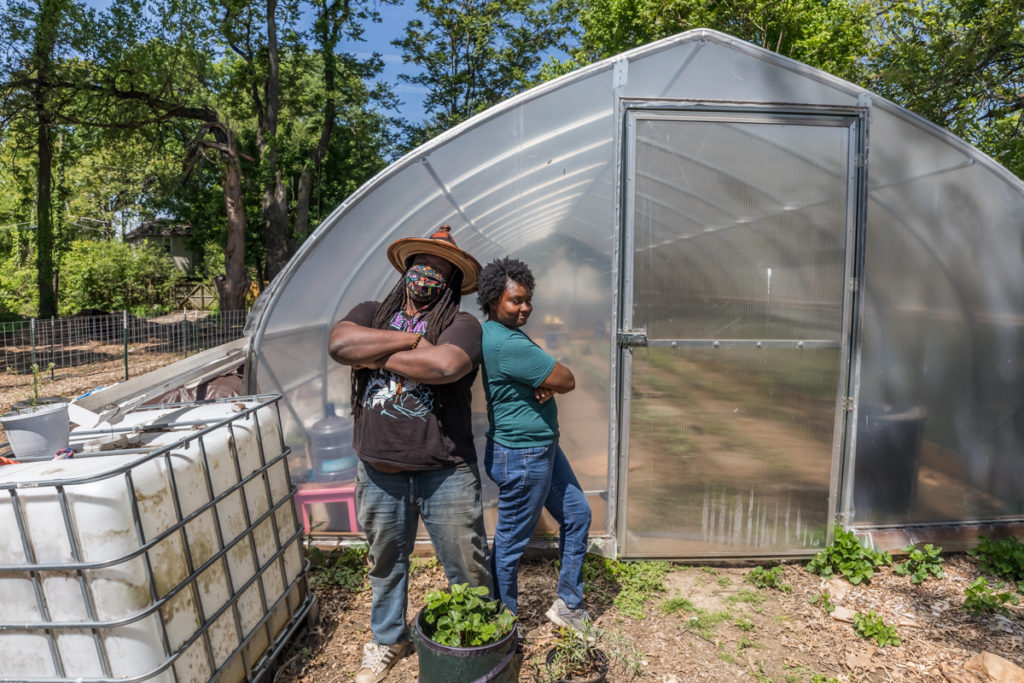 Michael George and Mariel Gardner are the creators of 5th Element Farms, an urban food garden on Wilson Avenue. Photo by Kathryn Harrington.

Mariel Gardner and Michael George originally started growing pollinator plants in their urban garden, located at 26th Street and Wilson Avenue, with dreams of cultivating cucumbers for a specialty pickle business. But when the pandemic hit, and they noticed essential goods like toilet paper disappearing from grocery store shelves, Gardner and George pivoted their Parkland operations into a project that could help feed their neighbors — and bind them closer together — in an area of the city where systemic racism has strangled food access.

“We were like, food could be next,” said Gardner. “It was just, we have this need, because we have to eat, people are being laid off from work, unemployment wasn’t coming through for people. So, we just said, we have the skills and the space, let’s just do it.”

Over the past year, Gardner and George have grown lettuce, cantaloupe, tomatoes, peppers, carrots, zucchinis and more on the three small plots that make up 5th Element Farms. They’ve distributed 300 pounds of that food to their neighbors.

And yet, Gardner’s urban farm doesn’t seem to qualify as one under the city’s current zoning definition. Gardner believes her garden’s unclear status in the city’s eyes may have stymied her efforts to buy two parcels across the street from her farm that are owned by the city.

Louisville’s existing Land Development Code contains sections for “community gardens” and “market gardens.” 5th Element Farms doesn’t seem to qualify as the former because Gardner and George are the sole farmers, and they don’t lease the space to anyone else. And it is definitely not the latter, because they don’t sell their food; they give it away.

There is a proposed change to the Land Development Code, however: As part of Metro Government’s efforts to make its historically racist code more equitable, the city’s planning department has proposed striking the definitions of “community gardens” and “market gardens,” which are only permitted in certain zoning codes. Instead, the revised LDC would allow all “urban agriculture” throughout the city. But, gardeners would technically have to apply for a permit with the city to operate.

“People still have a hard time, I guess, getting up and running,” said Emily Liu, the director of Louisville Metro Planning and Design Services. “So we decided to look at it as part of the Land Development Code, because…especially in West Louisville, there’s a very short list of accessibility of fresh food. And so we think this can be related to trying to remove barriers.”

Gardner hopes that the LDC change will encourage more urban gardening, especially in The West End’s food-starved areas. There, large grocery stores have abandoned the area without suitable replacements or successful intervention by Metro government.

“We have an overabundance of land in the West, and the West is a food desert. …Land’s intended purpose is not to build on, it’s to grow on. We can solve so many of our own problems just by using things that we have as the assets that they are,” said Gardner.

But, even with the changes to the LDC, there would be remaining problems — urban gardening advocates say that a weed ordinance in the city’s Property Maintenance Code creates confusion about whether yard gardens can operate freely in the city.

‘REMOVING BARRIERS’ IN THE LDC
If Metro Council ends up approving the changes to the Land Development Code, accepted forms of urban agriculture will be expanded to all types of city farming, including backyard gardens and community orchards, said Abby Rudolph, a member of the Food in Neighborhoods Community Coalition, which has been advocating for alterations to the LDC.

Under the changes, what are now community gardens would also no longer have to comply with parking requirements, said Liu. But, the new designation does come with some regulations to limit what Liu called “nuisances,” including limits on hours of operation and composting. She said the city hasn’t received any negative comments about its proposed changes.

Rudolph called the alterations “big changes that will hopefully help make a difference.”

The Louisville Planning Commission sent the LDC changes to Metro Council with a favorable recommendation. Liu believes the council’s Planning and Zoning Committee will first address the changes at its June 1 meeting.

If the council passes it, suburban cities with zoning authority in Jefferson County, such as Shively and Jeffersontown, must still independently adopt the LDC changes.

REMAINING ISSUES IN PROPERTY MAINTENANCE CODE?
In 2017, Amanda Fuller’s urban farm and orchard in the Portland neighborhood received a citation by the Louisville Department of Codes and Regulations.

She successfully contested the citation, but urban agriculture advocates are worried that this might continue to happen, even under the LDC changes, should a certain Property Maintenance Code ordinance remain untouched.

The city’s “weed ordinance” says all grasses, annual plants and vegetation other than trees or shrubs in the city should be under 10 inches, unless they are “cultivated flowers and gardens.”

“Cultivated” is the key word in question. To Mariah Corso, a founder of  Beargrass Thunder — another group advocating for changes to the LDC and PMC — it could be interpreted as appearing maintained, even though some advocates say it should simply mean “intentional.” But, healthy growth is not always tidy growth.

“A lot of times people think that corn is a weed,” said Jody Dahmer, also with Beargrass Thunder. “But if it feeds people and it feeds the family or it feeds the property owner, why do your neighbors have more of a say in what you can grow than you do?”

Code enforcement officers generally don’t cite a property unless someone contacts the city and complains. Because of this, Rudolph believes that property maintenance code violations are more likely to be enforced in poor and majority Black neighborhoods — precisely those that need urban gardens the most.

Robert Kirchdorfer, the director of the department of codes & regulations, said urban gardens are allowed in the city, but they need to be maintained and contained to the property they’re on.

He also said that most of the department’s code violations come from vacant properties— of which there are a heavy concentration in Louisville’s lower income neighborhoods.

Another problem with code enforcement, according to advocates, is that officers aren’t consistent with their citations and sometimes don’t seem to understand the weed ordinance themselves.

Code enforcement could do a better job of training its employees, said Kirchdorfer. There have been trainings in the past but not as many during the pandemic.

At an April Code Enforcement Board hearing, a weed ordinance violation received by Rosemary Bauman, who maintains a native plant garden in The Highlands, was dismissed. At the meeting, Bauman raised concerns about the weed ordinance. In response, Chair of the Enforcement Board member David Pearl said that Bauman’s garden should be a learning tool for code enforcement officers and an “education process” needs to happen. He said he would also talk to Metro Council members he knew about modifying the weed ordinance.

Wild Ones Louisville, a group promoting the growing of native plants, and Beargrass Thunder are working on recruiting a council member to adopt legislation changing the PMC’s weed ordinance.

TAKING IT UPON THEMSELVES
5th Element Farms is about more than just food sovereignty, said Gardner. It’s connected to all the other efforts in the area to find community, culture, economic autonomy and health from within, instead of continuing to rely on the government, which has repeatedly failed them.

“We were tired of waiting for things to get better, tired of waiting for public officials to do their jobs,” Gardner wrote in a text after LEO visited her farm. “Farming is the way we can tackle all the issues we care about. Climate change, relationship building, generational wealth, music, ancestry, food. All the things we consider necessities.”

All of Metro government’s efforts to solve food access in The West End and other lower income areas have not taken so far, including investments in nonprofits and mobile markets. Changing the Land Development Code hands some of the power to fix it to the people who are the most impacted.