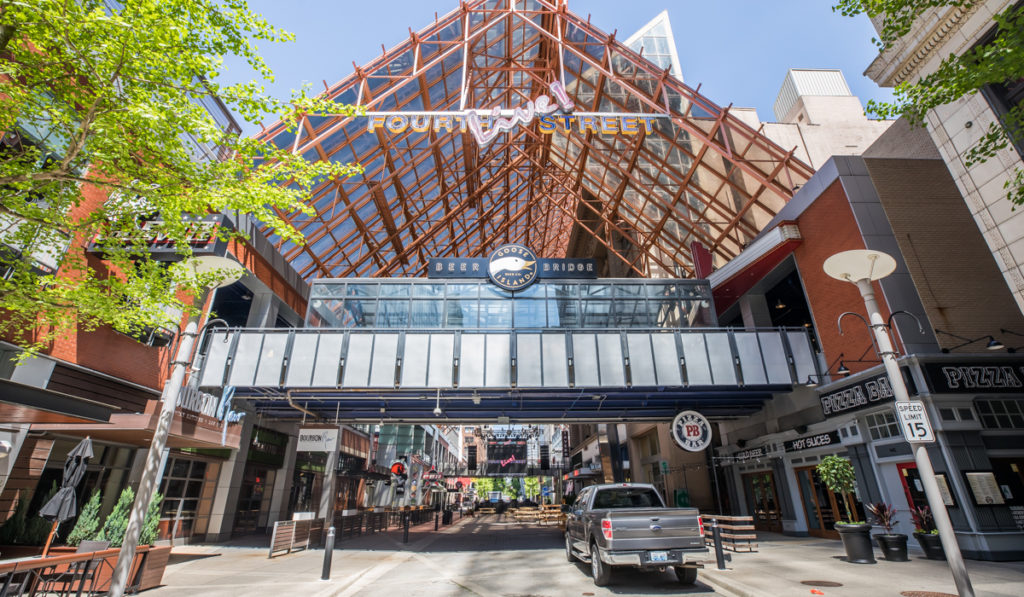 The pandemic has caused widespread sickness, death, grief and hardship amongst individuals and families in the Commonwealth and beyond, and it’s also taken a drastic toll on the economic pulse of Louisville as a city, especially the downtown area. That paired with a stream of current Kentucky COVID cases similar to last July, and a race between vaccinations and variants, poses one of the biggest questions of Derby weekend: Can the influx of tourists and spending give the city a monetary win, without becoming a super-spreader event?

Olivia Griffin, owner of the bars/restaurants The Limbo and Riot Cafe, plus the hat shop, The Mysterious Rack — all of which are located downtown — said that everyone has to buy in and be safe, because the economic impact, especially on small business, is needed. And, if we can pull this off, it bodes well for the future.

“Based on how Churchill Downs and the city handles the influx of guests, and all of us doing our part — if it’s a success, it will be a blueprint for how we conduct ourselves and plan other big events, and that’s what we need to bring tourism,” she said. “We need those events to keep downtown alive. I’m really hoping it goes well for everybody, and people feel safe, and it doesn’t cause a boom.”

According to data compiled by Louisville Tourism, on Friday and Saturday night, Louisville’s hotels are at 61% capacity for the Derby, whereas a normal year it floats between 98-100%. Derby weekend is usually estimated to bring in just under $400 million dollars throughout the city, but this year — when taking into consideration reduced tickets at Churchill Downs, less spending, limited events, etc. — Louisville Tourism expects the city to grab around $35 million.

“The Kentucky Derby weekend will still be the largest tourism generator for the area — bar none,” said Stacey Yates, vice president of marketing communications at Louisville Tourism.

And Yates agreed with Griffin that this being a highly visible event will impact the immediate future of downtown and the trust in holding events this size.

“The hosting of such a large-scale event gives us a pattern to showcase to other events when they’re making a choice about Louisville — how successful that the city is in hosting the Derby each year,” Yates said. “It will be definitely an example of how we move forward.”

As of April 26, Kentucky’s five day average of coronavirus cases was 505, which is in line with the middle of summer in 2020. Assistant Director of the Metro Department of Public Health & Wellness Nicholas Hart said that although the vaccine strength has been solid against the virus and its variants, an event this size is still worrisome at the time being.

“Not everyone in Louisville is vaccinated, and I’m sure that not everyone who comes to the Derby is going to be vaccinated,” he said. “It does concern me, and I’m assuming it concerns Churchill, and I’m sure it concerns the mayor and the governor. I don’t think it’s going to stop being a concern. We have, you know, we have a number of large events that have been planned in the city; they’ve been planned in the state. And I hope that people are taking those, those risks into account when planning for their event.”

Dr. Sarah Moyer, the director of Metro Public Health & Wellness, told LEO that vaccinations are the key to not causing a Derby COVID bump. And, since it’s readily available, people need to take advantage of that.

“I feel good about the vaccine supply, so anyone who is interested can protect themselves,” Moyer said. “Our case count is kind of where we were in mid July, so I don’t know if I can say I feel good about that, but I feel good about that anyone who wants to get vaccinated and protect themselves and their family and friends, has the ability to do that. And it’s never too late. If you think you might head out this weekend, preferably two weeks before would have been ideal, but now is better than never, so I encourage everyone to find the site nearest you.”

Moyer said that if you do choose to go out unvaccinated, get tested before you go back into public so you don’t contribute to the spread — there’s an individual responsibility we all have.

“We saw it here in Jefferson County; we got an uptick after spring break, but it went down again this week, so hopefully people get tested before they go back to work and are around others, recover at home and don’t infect anyone else, and we’ll continue our downhill trend,” Moyer said.

She also said the city is watching for variants through wastewater.

Another important Metro Health initiative to deal with the influx of tourists was to ask service industry employers to encourage and streamline their employees for vaccination.

Griffin helped several of her employees sign up for vaccinations and said that The Limbo and Riot Cafe will try to utilize their outdoor space this weekend to ensure safety.

Todd Piety, director of sales and marketing for Omni Louisville said that the downtown hotel — which has more than 600 rooms, several bars and restaurants, plus a market — has been following strict safety guidelines during COVID. He also mentioned the warmer weather has recently made them a weekend-trip destination and that the Omni has had several recent weekends near capacity, so nothing will be too different for Derby.

“We believe our guests are longterm guests, so we believe their safety is most important,” he said. “We’re not cutting corners to do anything to acquire more guests. We’re doing what everyone else is doing: social distancing; we have a cleanliness program that’s CDC compliant; and our associates, their temperatures are taken every day.”

Derby weekend can be unpredictable, but how this one turns out is an important litmus test for whether we’re truly ready for large events in Kentucky. For Griffin, as a small bar owner, there’s a sense of excitement but also concern, because the industry has been hit so hard, and the pandemic requires extra measures.

“The other thing we’re facing, along with the entire nation, is a service industry staff shortage,” she said. “While it would be lovely if I was fully staffed, and I had someone policing people at the door, checking temperatures, that’s just not going to happen, because I barely have enough staff just to service the restaurant.”