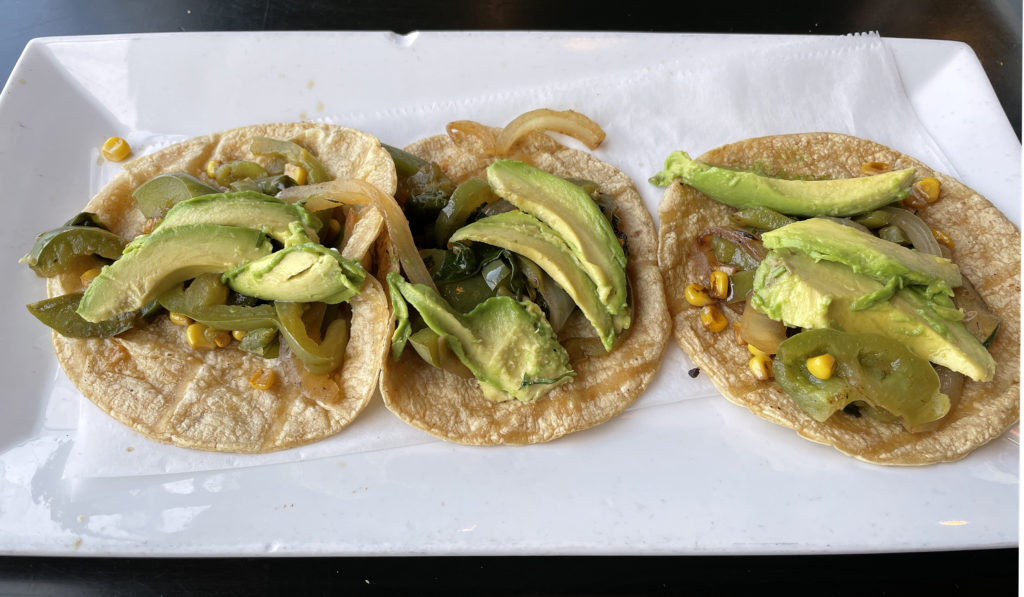 One of Limón y Sal's Taco Week specials was the Ximena taco, a meatless option with an avocado-topped veggie mix with remarkable flavor and texture.

Bam! The notification popped up on the top of my screen with an attention-getting tone: “Louisville Taco Week,” it read. “Because Taco Tuesday isn’t enough! We’re bringing you $2 tacos from some of Louisville’s most popular taco joints.”

What’s not to like about that? Who doesn’t love tacos? It got my attention anyway and sent me on a taco quest that ended up at the suburban Mexican eatery Limón y Sal. (I’m sorry to have to tell you that the April 12-18 week of specials ended before you saw this, but hey, tacos are good cheap eats even when they’re not on sale.)

Looking over the dozen “most popular taco joints” that participated with sponsors el Jimador Tequila and Gordon Food Service, I was a little disappointed to see that none of the little down-home, Spanish-speaking taquerias that I love were included.

But hey, variety is the spice of life — a couple of Irish spots were even on the list — and everybody loves tacos. When I spotted a place that I hadn’t tried named Limón y Sal, I figured a Spanish name was a good sign. I got about halfway out to its far northeast-end shop before it dawned on me that this is a margarita reference: lemon and salt.

Indeed, its expansive shopping center space provided a tasty Mexican meal, with tacos, and although I didn’t indulge in one of the seven margaritas (available in small, large and pitcher sizes) for a workday lunch, I admired the look of the massive bar that dominates one side of the room.

Kentucky’s pandemic-trimmed restaurant capacity was up to 60% at the time of our visit last week, which left plenty of open space around the tables. We felt even more secure, even with masks and vaccinations, in tall-backed booths topped by plastic dividers that turn them into bubbles.

Lunch and dinner menus are similar in selection and price, with a few lunch items such as fajitas, quesadillas and specials aimed at quick, affordable midday meals priced under $10. Combination lunches offer a la carte options of tacos, enchiladas, tostadas, cheese quesadillas, tamales, burritos and chile poblanos at $7.99 for any one, and $9.99 for choice of two, with rice and beans included.

A dozen antojitos (appetizers) range in price from $3.99 to $10.99 and appear well chosen for noshing with libations from the bar, which, in addition to all those margaritas, offers a good selection of tequila-based Mexican cocktails, Mexican and domestic beers and a short wine list. There appears to be close to 100 main dishes on the lunch menu, a selection broad enough to be worth reviewing in advance — with only a couple of impressive steak dishes, a fancy chicken specialty and a mixed-meats combo plate topping $15.

Complimentary chips got us off to a promising start: Crunchy, warm corn chips came with beakers of tasty mild and cilantro-accented hot salsa.

A table card listed three tacos on sale for Taco Week, and to be honest, they were a little off the beaten path: a “keto” taco with carnitas wrapped in lettuce leaves in place of tortillas; an avocado-based vegetarian taco; and a grilled shrimp taco.

The carnitas was not the classic Michoacán-style crispy marinated, baked, then fried pork. It appeared to be pork strips seasoned with taco strips and grilled. It was tasty enough, though, as the three tacos were rolled in crisp green romaine leaves with tomato-and-pineapple salsa and drizzled with crema.

The Ximena taco, a meatless option, filled three rustic corn tortillas with slices of ripe avocado atop a veggie mix of spinach, onion, green bell pepper chunks, yellow corn and bits of zucchini flavored with a piquant tomatillo salsa. The combination boasted outstanding flavor and texture, but the single tortillas lacked the strength to carry the load without splitting, making this a knife-and-fork taco.

We followed the tacos with a couple of Mexican entrees that made us happy.

Enchiladas Sofia ($8.50) were a meatless option so good that no one would notice the lack of animal flesh: Four corn tortillas had been marinated in adobo salsa, then folded over a delicious mix of black beans, cheese and yellow corn, with crumbled queso fresco on top and a pile of chopped iceberg lettuce and a pale tomato slice on the side.

Where’s the beef? There was plenty of it in a huge, steaming bowl of rich, comforting and very, very spicy caldo de res ($13.99), the classic Mexican beef soup. The steaming hot reddish-brown soup had the bones left in, which added richness to a really excellent broth. Big shank bones had been cut across with the marrow still inside, with long-simmered meat hanging in chunks off the bone. The soup also contained two large rounds of sweet yellow corn on the cob, large chunks of potato and oversize carrot chunks. Small bowls of chopped cilantro and Mexican-style rice came on the side, as did a few corn tortillas wrapped in foil.