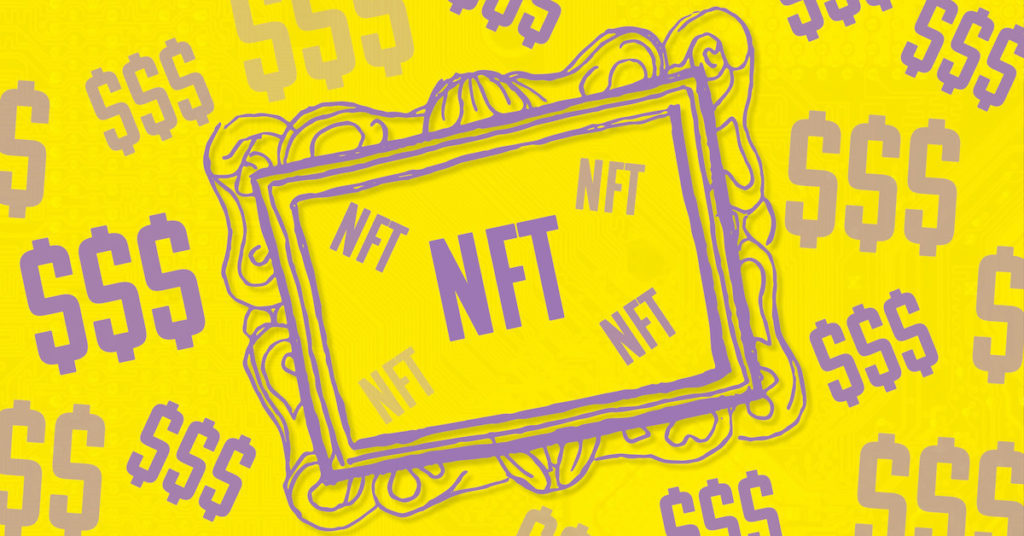 A recent spate of news stories have featured the trend of non-fungible tokens (NFTs) as a new vehicle to push various forms of art. For example, the Kings of Leon are releasing their new album as an NFT. Likewise, the artist Beeple sold a collage entitled “Everydays: The First 5000 Days” as an NFT for an astonishing $69 million, the fourth highest-grossing art sale in history. Untangling the jargon behind the movement is daunting, but the appeal for Louisville musicians is there. For Radet 5, a visual artist and musician who has played with Vyva Melinkolya and Bathroom Laws, it’s impossible to ignore.

“I am interested in the technology,” Radet 5 said, “but mostly just (because) I’m broke, and any opportunity to make rent needs to be considered.”

“I already work full time, and if I can squeeze a little sustenance out of the little art time I have available by just throwing it through a system… like that potential is hard to ignore. If I could afford to produce art for nothing I would, but I’ve got bills.”

To say that NFTs are complicated is an understatement. The history of NFTs is a little longer than you might imagine, with the concept initially coined around 2012 and the actual creator still a mystery. Related to bitcoins, NFTs were specialized tokens called satoshis, which represented a fraction of a total bitcoin. These satoshis were used to see everything from artwork to actual real estate.

As a concept, non-fungible tokens present an abstraction between art and ownership. Since Napster and others revolutionized how an entire generation consumes media, music and art have progressively taken up more and more digital space. This evolution of how media is consumed has led to economic hardships for many involved, especially musicians. For example, Spotify, a streaming service with 4 billion subscribers, only pays about .003 or .005 cents per stream. That means that you would need more than 300 streams at the low end to make a dollar. That figure has fluctuated over time, with Spotify gradually decreasing payouts to artists and distributors. An NFT features a unique “signature,” meaning that the ownership of the music is verifiable through blockchain technology. Think of an NFT then as a digital watermark, a vessel that creators can tie directly to the final product through smart contracts.

Because they are digital files, NFTs include not only the authentication process of who owns the product, but who created it. For artists, that means it’s impossible to have any unpaid appropriation of their art without consent.

The most common way to create an NFT is to use a service like Ethereum, which is currently the largest blockchain service for NFTs. Whichever blockchain you choose, you’re subject to the rules and criteria of that site. Within your selected blockchain, you choose your digital wallet of choice, then you need to purchase the appropriate amount of cryptocurrency to ensure the creation of your work. Next up, find the NFT platform that works best for you. These platforms are basically just marketplaces for the sale of your goods, and — for music — include sites like Catalog or Audius. There are plenty more sites and options out there, and in many cases, you can create an NFT directly on the site. Make sure they are compatible with U.S. laws before you proceed. Just like with many other digital services, you follow the prompts accordingly, including the imagery and text, contractual or otherwise, that you want in the file. Mileage varies from site to site, so look for something that’s a good fit for you. You don’t have to be a tech wizard to get in there and make the work, so don’t be nervous about any perceived bars to admission. As noted above, there is a great potential for artists to cash in on this concept in a way that subverts low-paying subscription services. Kings of Leon, who recently released three unique tokens at the beginning of March, have reportedly earned approximately $2 million in sales. For Floyd Patterson, the emcee better known as Pronoun, there is plenty of potential in with NFTs, albeit with some reasonable concerns.

“I love the idea of selling my work and getting paid if that work is sold later, but whether that happens is up to the consumer,” said Patterson. “Limewire existed for a reason. You’d need a STRONG fanbase to really take advantage. You also get paid in cryptocurrency, most of which have speculative value that will change, for better or worse. It’d be like selling your work for stocks. It could work out, it could also end up worthless.”

As of this writing, there are at least three cryptocurrency ATMs in Louisville, which provide artists interested in pursuing the form an opportunity to cash out.

In addition to the obvious downsides of the fluctuating value of cryptocurrencies as the return on your work, NFTs create a substantial environmental concern. The environmental concerns with NFTs are less unique to that delivery method and are instead part and parcel to blockchain and cryptocurrencies in general. Transactions are authenticated through complex networks of servers that “prove” that the work is “real.”

Basically, the more people that utilize blockchain technologies, the more servers are required to make it work. Those servers take an enormous amount of power to keep functional, to the degree that just these server farms utilize more energy in a year than entire countries. The hope is that as the technology develops, it will encourage more green energy innovations to match the output. For Radet, the environmental concerns are real, but not specific to the medium. “NFTs are not a root cause of either the negative impact of energy usage on the environment or rampant neoliberal commoditization, so getting rid of or avoiding them isn’t going to help more than placating our own consciences and bolstering our egos.”

Suffice it to say, NFTs offer an interesting alternative to modern methods of releasing art into the world, but recentering the curation of art firmly on the artist. The attention to NFTs has illustrated the flaws in capitalist distribution channels for art, both in terms of the exploitation of artists by big tech and the very real concerns over energy consumption in the face of climate change. Irrespective of whether or not this trend perseveres, it’s worth considering any way to reframe our consumption of art and treatment of artists as a whole.