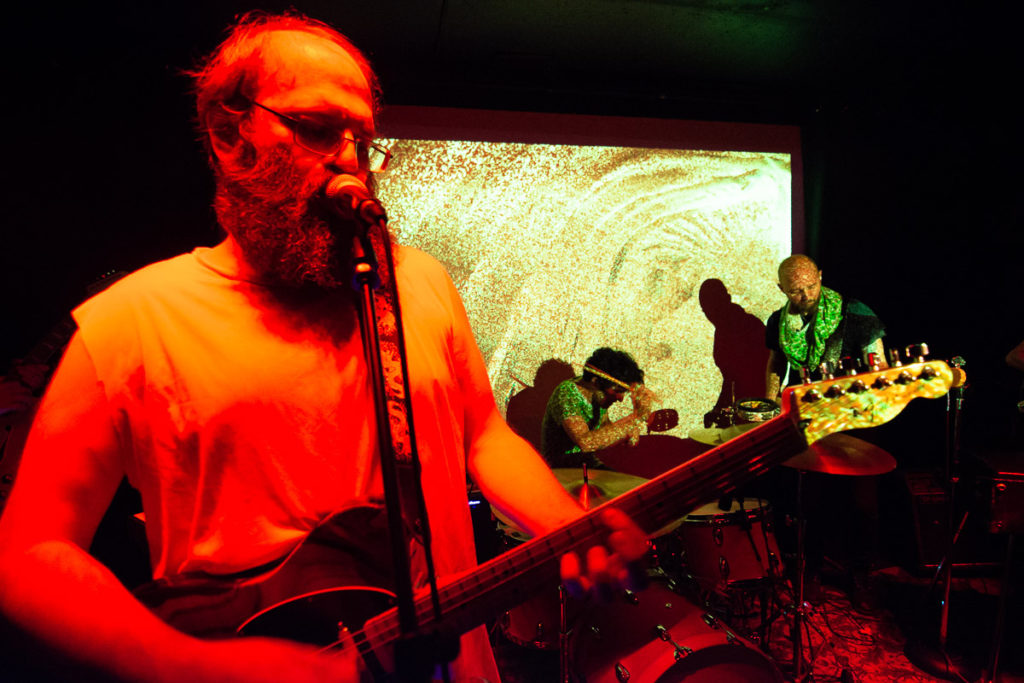 McKinley Moore, left, performing as a member of the local band Pleasure Boys.

Another Place Sandwich Shop was a downtown lunchtime institution, serving the Louisville business district for five decades. It’s sibling space, the jazz-themed basement lounge Jimmy Can’t Dance, was starting to become a destination for the local music scene. But, unfortunately, the pandemic took both businesses. The good news is that the local brewery Against The Grain has acquired both spaces, and they plan to honor what both businesses were, with slightly different spins.

The upstairs will become Against the Grain Sandwich Emporium, which will continue to cater to the lunch crowd. The downstairs will be turned into The Flamingo Lounge, featuring cocktails and Against The Grain beers, as well as concerts and other live entertainment, which will be booked by local musician and promoter McKinley Moore, who previously spearheaded the events at Kaiju. At Kaiju, Moore had his finger on the pulse of the music scene, booking both longtime staples and up-and-coming artists that had just put out a demo, with the genres and styles spanning the entire, diverse local ecosystem. With The Flamingo Lounge, which is about the same size as the venue at Kaiju, with a modest capacity of 100, Moore plans to do the same thing — constantly be combing through new music and booking what clicks.

“It’s a little selfish, I guess, but for the most part, I’ve just tried to always book things that I like, and hopefully that translates well, and so far it has,” Moore told LEO. “I try to keep my ear to what’s going on…There’s a lot of good music in this city to choose from. There are a lot of good people.”

Jimmy Can’t Dance leaned toward sit-down jazz shows, although they definitely did some experimental concepts. The Flamingo Lounge is going to cover a broader range of music and most likely reflect what Kaiju’s schedule used to look like.

“We’re going to keep it pretty versatile, so if we want to have a seated show we can, but if we want to pack as many people in there as we can for a punk show, then we can do that too,” Moore said.

Downtown has undoubtably taken a hit lately. And, even before the pandemic, many locals felt the city center pertained to tourists more than them, but Against The Grain and Moore are betting that a business like this will stick.

“We believe in Louisville,” co-owner of Against the Grain Sam Cruz said in a press release. “This city is amazing. The principal partners of Against the Grain hail from Indiana, Kansas, and Kentucky, but this city gave us all a home. It drew us together to realize our collective dream of Against the Grain. We are committed to Louisville and, more specifically, downtown Louisville. Before the pandemic, Louisville exuded all the energy and excitement that guaranteed visitors would have a great time here. Like many when the pandemic hit, we were given the time to be introspective of our values and goals. We’ve enjoyed a social awakening and an opportunity to arise an even better city than before. We’re more than excited at the chance to reinvest and reinvigorate downtown Louisville.”