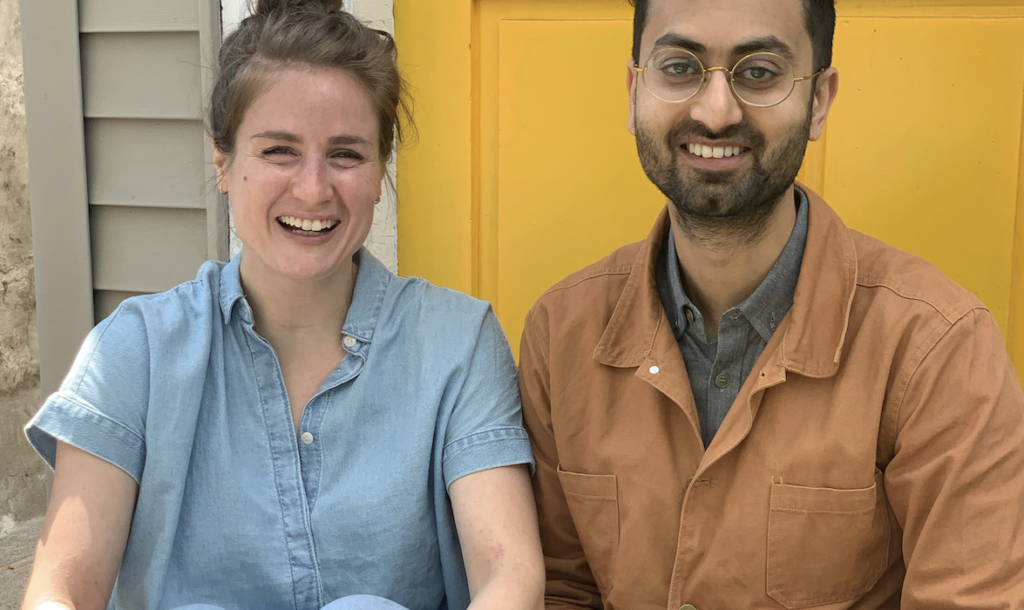 The genesis of the 9-minute short film “Pinball” is a long story, said director Naveen Chaubal. “It depends how far back you want to go.”

Chaubal and co-editor and producer Bryn Silverman, who attended University of Southern California School of Cinematic Arts together, were initially interested in the account of an outsider trying to fit in, then the idea for the film went through many iterations of time periods and settings.

But several years back, the idea took a more solid form — something to do with buses. It was “a few years out of film school,” said Silverman. “Naveen and I had started working together on ads. He was living in LA taking buses everywhere, and I was living in Guatemala. He came down to visit and do some research on the camioneta buses there — the retired school buses that are turned into public transportation.”

Through the “power of YouTube,” Chaubal said, he discovered figure 8 school bus racing at the Jeffersonville Sportsdrome Speedway in Indiana, just ten minutes across the river from Louisville. It’s a sport not unlike professional wrestling where crashes are expected, and if they don’t happen naturally, someone — often times Speedway promoter Mike Gibson — will hop in a spare bus and make sure a crash happens.

Chaubal, who was living in Los Angeles at the time, was visiting his family in Indiana and decided to check out the races. He met Gibson, whose initial hesitancy quickly dissolved. Silverman and Chaubal were granted VIP access to the drivers and their pit crews, and, for four months, they were “regulars” at the Speedway.

“The location is so cinematic,” said Silverman.

The two elements of “outsider” and “buses” gelled into “Pinball,” a short film about an orphaned teenage boy who lives a reclusive life in a school bus and dreams of racing buses at a local speedway. The name of the film was in part inspired by the nickname of one of the most helpful racers to Chaubal and Silverman. Chaubal described the filming, which often ran deep into the night, as “speed racers fraternizing with film nerds.”

While it was Gibson who opened the door to the race world for them, it was Steven Schardt, a producer and director, who got the ball rolling with the Louisville film community and introduced them to the people they needed to know, including cinematographer Daphne Wu. Silverman and Chaubal raised some funds and shot a teaser for the short film to “develop the story and develop the world,” said Chaubal.

Chaubal grew up in Indiana. Silverman was raised in Oregon, and her first time in Louisville was when they shot the teaser. The overwhelming support from the local film community, including the people who worked on set, convinced them both to move to Louisville — Chaubal from LA and Silverman from Germany. Silverman said that the welcome they received in the city was a “huge incentive” to move and “why pay a million bucks” to live in bigger-ticket cities?

Through auditions at various local high schools, coordinated with local arts and English educators, they found their star in — then 16-year-old — Yosef Al-Windawi, a Seneca High School student and nonactor. As if by something more than chance, Al-Windawi was on Chaubal and Silverman’s bus ride from the auditions back to their AirbnB.

“He has a strong spirit of curiosity,” said Silverman. It was essential for them to have a nonactor in the lead, and Al-Windawi delivered with “vulnerability without the performative aspects.”

Silverman and Chaubal offered up an anecdote to show how by-the-seat-of-their-pants the production was. They used part of their budgets to buy buses. One of the buses they bought they retrieved from Ohio. It had no keys and no seats and would start but not turn off. Chaubal had to sit on the floor and manually feed gas to the engine from the body of the bus as they barreled down the highways. The bus didn’t need to run for very long after they got it to town. “We bought buses to crash,” said Silverman.

Looking ahead, we can expect a feature-length documentary that springs from “Pinball.” Silverman is currently working on a limited series on the life of Annie Oakley and on one on the thyroid gland — she was diagnosed with thyroid cancer a few years ago. Both Silverman and Chaubal are interested in hybrid spaces between documentaries and fiction. “It’s a nice film space to be in,” said Chaubal.

“Pinball” has been shown at a number of prestigious festivals including Tulsa American International Film Festival, Film Independent showcase, Syndicated Film Fest, Greenpoint Film Festival and the Louisville Film Society Short Film Slam and Geoff Storts’ Below the Line short film series right here in Louisville. The film is available on NoBudge, where it won the audience award. NoBudge is a movies club that presents a hand-picked selection of new indie movies daily.  It is, “one of the best places to sample what’s happening in low-budget cinema worldwide,” says Glenn Kenny of The New York Times. •