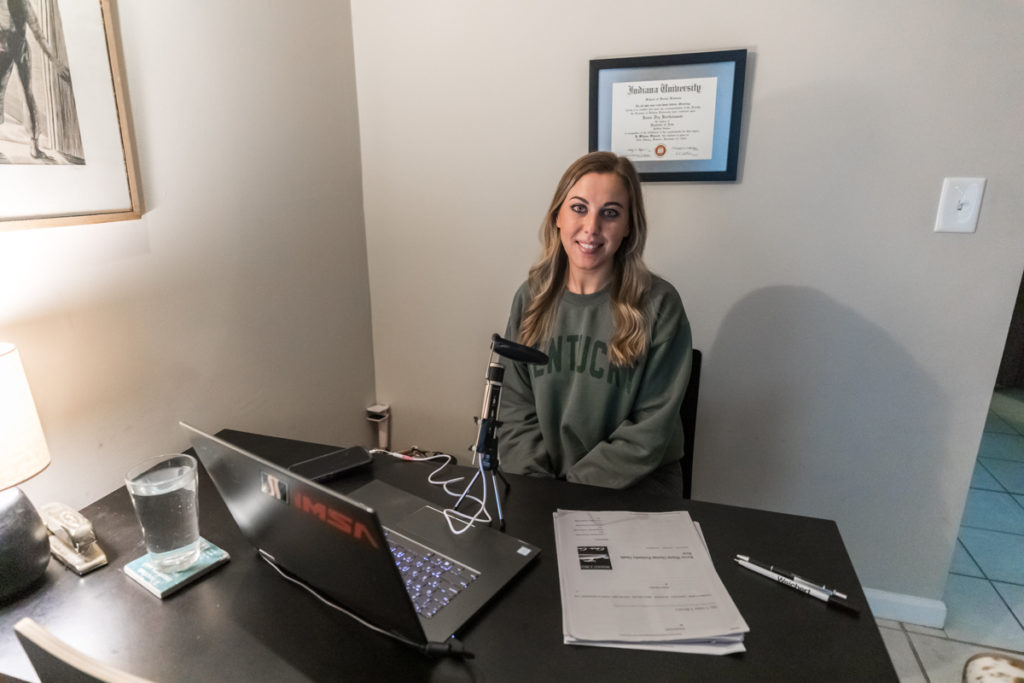 Like many people who took social distancing seriously during the pandemic, Jessie Bartholomew’s evening routine was repetitive and solitary: She would come home from her job for a real estate company, eat in front of the TV and run on the treadmill.

“When you’re single and you live alone, it does leave you with a lot of free time,” she said. “I was just like, I could keep watching these TV shows or I can actually do something productive.”

So, Bartholomew, who is 27, started a podcast in November, one of more than 1 million that were added to Apple Podcasts during the pandemic, doubling the number of shows (both active and inactive) on the popular app from April 2020 to March 2021, according to Podcast Industry Insights. In addition to Bartholomew’s show, Kentucky History & Haunts, five out of the nine Louisville podcasts in our main story this week launched during the pandemic: Reely Queer, Butter Pecan Podcast, My Skeptical Sister, Great Podversations and Howell Dawdy’s Fast Track. Listenership for podcasts also increased after an initial dip at the start of the pandemic. Now, 28% of the total U.S. population over the age of 12 — 80 million people — are weekly podcast listeners, up from 17% the year before, according to an Infinite Dial study.

Bartholomew and the hosts of My Skeptical Sister told LEO that they were motivated by a desire to break free of the doldrums of pandemic life, marked by isolation and added stress. And, the relatively low barrier to entry was enticing, too: You can create a rudimentary podcast with free internet tools as long as you already have the basic equipment, like a laptop or a cell phone. Although, it can be more difficult to create a higher-tech podcast and to distribute it.

Laura Ellis, Louisville Public Media’s director of podcasts & special projects, has watched, or rather listened, as podcasts have taken off during the pandemic.

“It’s something that maybe people have [said], ‘One of these days, I’m gonna do a podcast and see if anybody likes it. And so I think people being at home, it was just ‘one of those days’ finally came for a lot of people,” she said.

Bartholomew is a prolific listener of podcasts. She never misses an episode of HowStuffWorks even if the topic doesn’t interest her.

The podcast she came up with, Kentucky History & Haunts, is a narrative-style show. In 11 to 40 minute chunks, Bartholomew uncovers the dusty corners of the state’s history: from murders to mysterious meat showers to a hunt for Daniel Boone’s grave. Five months in, her episodes garner a few hundred listens per episode.

Similar to Bartholomew, Meghann Mattingly, 40, and Erin Sexton, 36, of My Skeptical Sister, a paranormal comedy podcast, had often talked about starting a podcast together before the pandemic. But, none of the sisters’ ideas ever seemed right, and they filled their free time by spending time with friends.

But when the pandemic hit, Mattingly and Sexton, who are both teachers with three kids, found themselves confined to their homes all day. When they weren’t teaching children online, they were trying to wrangle their own.

In the first episode of My Skeptical Sister, Mattingly and Sexton addressed what drove them to record.

“We decided to do this podcast, because we needed something to live for during this pandemic,” said Sexton in her intro.

“Yes, we were getting to the point where there was nothing to look forward to,” said Mattingly. “And when you get to that point, you either don’t look forward to anything or you make something happen.”

Now, the sisters have an estimated audience of 227.

Bartholomew, Sexton and Mattingly didn’t need much to get started.

Bartholomew bought a $60 microphone off of Amazon, a pop blocker and a $6 adapter to plug into her phone to record. She also made an account on Anchor, a free podcast hosting site, which she uses for light editing, too.

Mattingly and Sexton were even lower-tech at first, recording with the built-in microphones embedded in their AirPods. Now, they have more professional equipment, but they still record and edit with an app on the computer. Audacity and GarageBand are two free tools that can be used for both.

Some retailers actually experienced a shortage of podcasting equipment during the pandemic. The Doo Wop Shop on Bardstown Road sold more podcasting equipment than ever starting in the summer, said store manager John Metcalf. At one point, the shop was sold out and more equipment was on backorder. Sellers across the country were having the same problem, Metcalf said.

People weren’t just using the equipment for podcasts, though. Some of the new customers were churches or businesses that needed to virtually communicate in a more effective way, said Metcalf. But, he also thinks the tumultuous year created an itch for podcasting.

“Last year was not just COVID but opinions out there on lots of different subjects,” he said. “So, I think summer literally got tense. A lot of people wanted to get their voices out there and be heard.”

Now, though, Metcalf said, both the supply and demand for the equipment has evened out. Manufacturers responded to the need, and Metcalf has started to see fewer people walking into the store to buy or rent microphones and audio interfaces.

Ellis said that when podcasting first became a big deal, “it was supposed to democratize the medium of audio.” No longer did you need a radio license, a transmitter tower or an FCC license to craft audio stories.

“But like everything else, podcasting eventually became sort of corporatized,” said Ellis. “And there were people who had the money who were able to promote their shows, and it became bigger because of that.”

Ellis and Louisville Public Media have created a solution to the barriers that have emerged in podcasting: A podcast incubator program that will provide chosen applicants with mentoring and distribution help. In particular, the public radio station is looking for podcasts “made by and for people of color, LGBTQ folks, immigrants and people of marginalized genders.”

Ellis sees podcasting as more than a fun hobby. It’s also a way to heal some of the divides in the city that have been highlighted by the racial justice movement of 2020.

“There’s a lot we don’t understand about each other,” she said. “And we would make our whole city better if we understood each other better and if we listen.”

On a personal level, podcasting has eased the stress of the pandemic for Bartholomew, Sexton and Mattingly.

“I’ve got something fun to look forward to that’s, like, my own, you know? Our own,” said Sexton. “It’s not my role as a wife, it’s not my role as a mother, it’s like, this is just a fun thing that we started and people seem to like it, so that in general is mood lifting.”

Bartholomew said that her podcast has provided a “happy distraction” during the pandemic.

“It got dark, and so just having this distraction — yeah, it was comforting for sure,” she said.