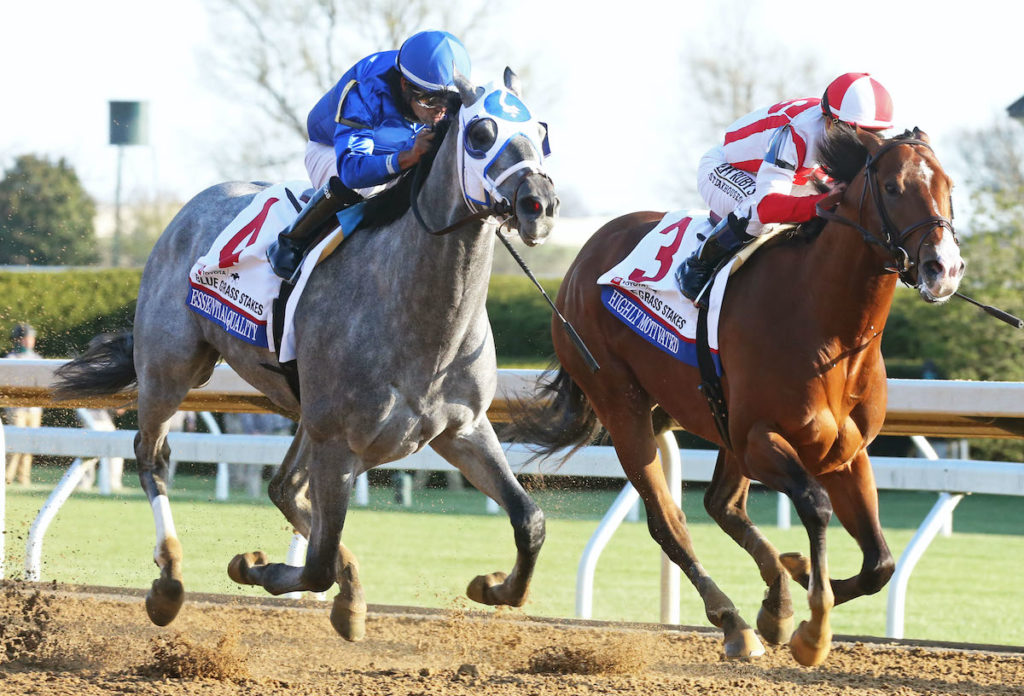 What’s in a name?

Could be a Kentucky Derby pick — though not necessarily a winning one.

At the card game the other night, Jim and Dave, a couple of likely Derby bettors, were getting a first look at a list of this year’s Kentucky Derby contenders.

“Hey, there’s a horse called Helium!” Jim exclaimed. “That’s great. I’m a scientific guy, and I gotta like any horse named for an element of the periodic table. Helium, I love that name. That’s my horse!”

“Hmm, Helium,” he said. “Sounds like a candidate for last place.”

Or maybe some place in between. Speaking as a handicapping scientist, I’d say the chances for Helium aren’t that good. He’s a nice horse but never been in a race even close to the Derby distance – a mile and a quarter … without any water.

But one would be foolish to blithely discount picking a Derby horse by its name. But, millions of people will be doing exactly that on Saturday, backing their hunch-bet-a-bunch choice in the 147th Kentucky Derby. And some of them will be right!

Of course, there’s not much chance of that.

But that’s the thing about the Kentucky Derby: it’s bigger than handicapping. The race is followed around the world, and millions will be watching on TV Saturday when the horses come out on the track.

Who will care then for Beyer Speed Figures and the Dosage Index? Better to have a genuine Swami pick — or a name that just seems lucky. Like if it was 1965 and while sitting on a blanket in the infield you found Lucky Debonair, ridden by Bill Shoemaker.

I think the race comes down to four serious contenders — a top four, if you will — and one of them, it says here, will win the Kentucky Derby.

Then there are three or four longshots who might run along late to spice up the exacta and trifecta. Identifying those is more difficult. A longshot, by definition, is a horse that is not perfect. But longshots do come along in the Derby, and we expect one or two will show up at dizzying odds. To make somebody rich for a day, at least.

My top four includes three whose names are ok, but sound as if they might have been chosen by a committee of cautious corporations: Known Agenda, Essential Quality, Highly Motivated. Nothing wrong with any of those names, but I’m not hearing Whirlaway or War Admiral.

The fourth, however, is a red-hot runner from California named Rock Your World.

Of course it doesn’t mean he’s going to win.

But I do rank Rocky in the top four.

Essential Quality is going to be the betting favorite in the Kentucky Derby and rightly so. He’s five-for-five and has won over $2 million. He scored an easy victory in last fall’s $2 million Breeders’ Cup Juvenile and was named 2-year-old champion. This spring he’s come out running again and just bested Highly Motivated in the Blue Grass Stakes at Keeneland racecourse in Lexington. Primed and ready.

Jockey Saez beams when he talks about Essential Quality. “He knows where the wire is, and he wants to win,” says Saez.

I’ve given some talks in which I described Essential Quality as a dark gray freight train, coming right down the rails.

That’s how he looks to me. But trainer Brad Cox says his horse is “light on his feet,” which is very good for a strong, solidly built animal. Instead of a freight train, then, we’ll make Essential Quality a passenger liner, a bullet train.

He’s the classic bay beauty. Mahogany coat, with black mane, legs and tail. And strong. A tough guy who can take it — as he did fighting Essential Quality to the wire in the Blue Grass.

Some might say that race settled it between the two. Highly Motivated had the rail the whole way and couldn’t take a victory from Essential Quality. But I think you could also say Motivated is a horse coming along as the distances increase and he gains maturity. He’ll have some nice odds.

Known Agenda is not a sparkler but a skilled runner. A bronzy chestnut who laid off the pace in the Florida Derby, Known Agenda responded exactly to the commands of rider Irad Ortiz Jr. A smart horse, with a nice turn of foot, piloted by the leading rider in wins in North America. Ortiz rides in front or from off the lead. But whatever he’s doing, he times his moves so nicely. It’s kind like you don’t see him … then there he is!

I like this horse on paper more than I like him by personal rooting interest. Otherwise, I might just make Known Agenda my solo pick. Still might. He’s right down the Raise A Native sire line, with distance blood coming from his dam’s side.

Also from the Raise a Native sire line, historically preferred in the Kentucky Derby, is Rock Your World.

Rock Your World has run just three times, all victories, and his last race was… well, it was a world rocker. He “aired out” the Santa Anita Derby with speed and class. And more speed. This is a fast horse, with a sharp “look.” A presence. Rolling along on the lead in the Santa Anita Derby, Rock Your World simply accelerated away from the field in the far turn — just showing his superiority. Then danced through the stretch.

Rock Your World gets a jockey change to Joel Rosario, who won the Kentucky Derby in 2013 with Orb and has been at the top of the game ever since. I expect Rosario will take Rock Your World back a little in the Derby and time his burst of speed to the moment. If all goes well.

Other than those four, we see three longshots to watch: Dynamic One, Soup and Sandwich and King Fury. Don’t know if any of the three has enough to win, but one or two of them might show up to ignite the exacta and trifecta payoffs.

Looking For Long shots In All The Right Places

Soup and Sandwich is such a mundane name but kind of fun. He ran big in the Florida Derby before he was passed by Known Agenda. And kept on trying. A light gray horse, with black markings, Tyler Gaffalione takes the reins.

Dynamic One is sort of a starched-collar moniker, but he’ll be a long, long, long one on the odds board. With Jose Ortiz riding from behind — at which he is very good.

King Fury seems full of fire. On the backside the other morning, the rider had a double-lock hold on the reins, with Fury furiously grabbing the dirt ahead with his forefeet, looking to go. “Turn me loose!”

You might add Medina Spirit to that list because he’s consistent and will be ridden by three-time Kentucky Derby winning jockey “Johnny V” — John Velazquez.

Looking through the rest of the field for names, we find two bourbon horses, Bourbonic and Midnight Bourbon. Pretty good names for a Derby in Kentucky. I don’t like either one of them — but you might.

Then you’ve got the Car and Driver specials: Super Stock and Hot Rod Charlie. I noticed that Hot Rod Charlie has a pretty cool saddle: four-on-the-floor, Lakes Pipes, rolled and pleated. Super Stock, of course, could be a top fuel dragster, with Shirley “Cha Cha” Muldowney behind the wheel. Hot Rod Charlie won the Louisiana Derby, and Super Stock took the Arkansas Derby. Not impossible.

Elsewhere? Well you might see something I don’t see, and for heavens sake don’t forget to bet on it. What if the horse won and you wasted $10 betting on some other horse that somebody “gave” you. A tip — hah!

My best advice is don’t let anybody (including me) talk you off your horse.

It’s your Derby Horse, after all.