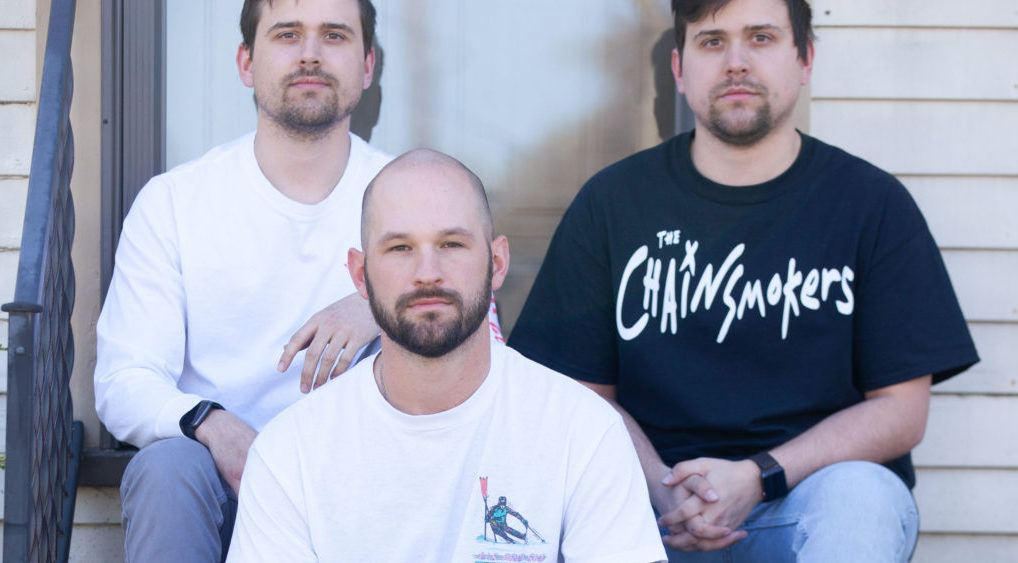 Left to right: Josh Courtney, Nate Stemle, and Tyler Courtney, members of the local band Castlewood, pose outside their recording studio in Stemle's home on April 2, 2021. Photo by Carolyn Brown.

Any band who wants to take the stage, first has to prove themselves in the studio. For one local band, though, that studio is actually a living room in New Albany, a cozy yellow space encircled by liner notes, album covers and lyrics scribbled on the walls.

This is the homebase of Southern Indiana musicians Nate Stemle, Josh Courtney and Tyler Courtney, who perform together in the band Castlewood. Stemle, the frontman and lyricist, is a New Albany native who teaches English and journalism at Saint Xavier, his own high school alma mater. Twin brothers, Josh and Tyler Courtney are the producer/bassist and pianist/guitarist, respectively.

The group is in between two releases: Castlewood’s first EP, Eleven, which was released on March 8, and an upcoming single, “Give It Away,” due to premiere on April 16.

The songs on Eleven are a little hard to categorize: While “indie” is a useful catch-all, they are also breathy, reverent, soft and dreamy. I’ve played this album through at least seven times, and I get the sense that it could score a romantic scene in a movie.

All of the songs on Eleven are about the highs and lows of love. “No Warning” tells of romantic feelings that took the singer by surprise; “All is Well” speaks of a relationship that’s better than fiction. Even in “Night Off,” in which the main character and his beloved fight, they reconcile. (Stemle also has a tattoo on his arm that reads, “Music is love.”)

Much of what makes Castlewood unique is the group’s ties to their hometown roots. Not only have the band members known each other since childhood, but Eleven itself was named for Stemle’s house on 11th Street in New Albany, the location of the aforementioned studio. The Castlewood name is a direct reference to the street where he grew up. There’s even an occasional bit of Kentuckiana flavor in the band’s lyrics: in “Next to You,” the singer tells his girlfriend that he will call her at 5:02 ­— a double meaning that refers to the time Stemle’s real-life fiancée, Aubrey Meiners, calls him after work each day and the obvious area code.

Some of Castlewood’s most immediate goals are geared toward the local market: they want to get a song on a rock station. The group would love to get 10,000 fans, they said, but Stemle’s first goal for the band was for one person they don’t know to listen to one of their songs.

Although Castlewood is a newer musical venture, the Courtney twins are no strangers to wider audiences. Through their band, Before the Streetlights (BTSL), they’ve racked up a bevy of credits as the openers for “emo” groups like Escape the Fate, Secondhand Serenade and The Red Jumpsuit Apparatus. In March 2016, BTSL’s song “Goodnight, Goodbye” played in more than a thousand Journeys stores, which the group considers to be one of their biggest professional breakthroughs. It brought them a new surge of fans, including some as far away as Scotland and France. The song’s success is well-earned.

While Castlewood might be a bit of a departure from BTSL ­­— Tyler pointed out that Castlewood’s music is more “radio-friendly” than BTSL’s, which is fair; one of BTSL’s early songs talks about getting a fake ID and running from the cops. The group has confidence in their future, despite the challenges of the last year. While all the members of Castlewood currently work or go to school full-time, the pandemic gave their creative process the literal and figurative space to flourish.

“Without the pandemic, we wouldn’t be a band,” said Josh Courtney.

The lyrics of one of their earliest singles, “Summer of Josh” (whose name is a play on the Seinfeld character George Costanza’s “Summer of George,” referring to a season of waylaid plans) will be painfully familiar to anyone recounting 2020: “Staring at the four walls of my house / Getting sick and tired of hanging around / Nowhere to go, nowhere to be / Sun is shining on 11th Street.”

Breaking out of their own stagnancy led the band to create the cover of Eleven. The trio, armed with disposable cameras, took photos of moments that made them happy ­— going camping, moving out of an old house or even just hanging out together on a porch. The end result, after some culling, was a pile of photos commemorating a summer that otherwise would have been lost — a summer that they salvaged by sharing creative energy.

Castlewood does not yet have the name recognition or touring history, but if there is one thing this band isn’t missing, it is energy. In the hour and a half that I spent with them (twice as long as we had originally planned), the bandmates bounced fluidly from their songwriting process to shared nostalgia, reveling in memories of mid-2000s mall concerts and a past Harvest Homecoming Festival. We laughed about shared connections from middle and high school, about how the Greater Louisville-area feels like a small town with big city elements. Even when the bandmates weren’t talking about music, the way they vibed together was (forgive the viral language) joyfully infectious.

When the pandemic is over and live concerts can return, they want to put that energy to work at an open mic or a concert (or eight or 10 or 20) –– maybe a joint tour with Elephants (the name under which Josh produces his solo works) and BTSL. First, though, they admit that they’ll have to learn how to adapt their songs to be played live — “a whole different art” from recording them in a studio, Tyler said — but, in the meantime, they have their new EP and single to share.

The sun is shining on 11th Street. Next year, perhaps, stage lights will shine on Castlewood.