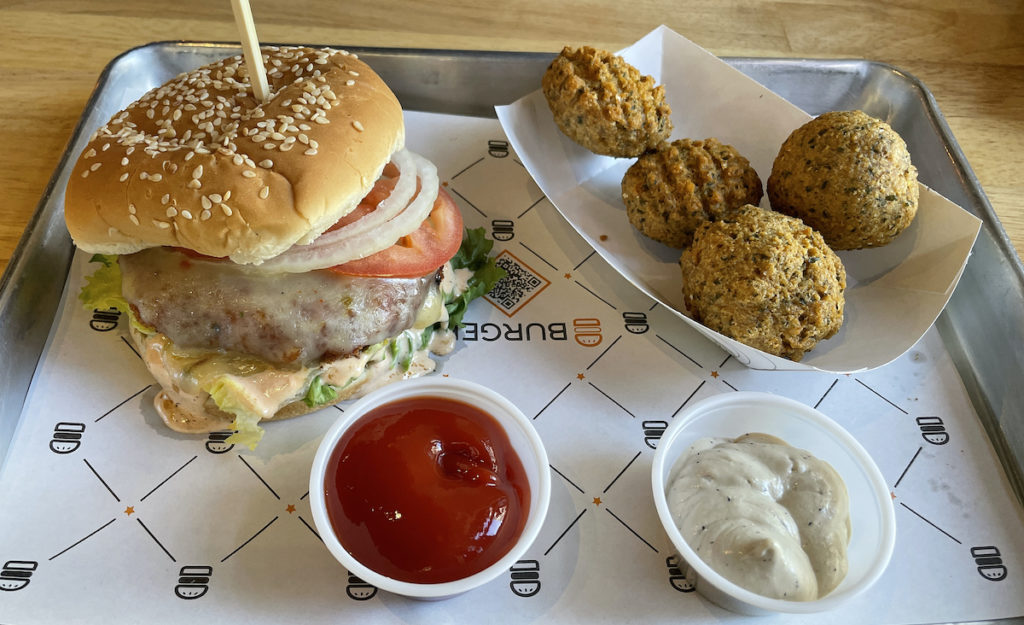 The new aloo tikki burger at BurgerIM puts a meatless Indian patty of potatoes, peas, and carrots into the more familiar setting of lettuce, cheese, onions and tomatoes on a sesame seed bun.

I don’t normally go back to a place I’ve reviewed only a year or so ago, but I’m making an exception for BurgerIM. Why? Grace under pressure merits applause. Also, Indian food!

Here’s what I’m talking about: The owners, the husband-and-wife team of Nirmal Raj and Veronica Michel, opened their doors in mid-March last year, just a few days before the pandemic shut down in-restaurant dining.

That was a palpable hit, but it wasn’t the only one. Around the same time, BurgerIM’s California-based parent corporation, Burgerim Group USA, spectacularly collapsed, its bankrupt owner fleeing the country.

Nevertheless, Michel and Raj persevered, promoting the place on social media and turning out burgers of excellent quality that drew consumer raves. Like the Timex watch of yore, they took a lickin’ and kept on tickin’.

Then I learned that they’ve added new menu items as they approach their first birthday on April 17.  Not just any burgers, either, but creative inventions infused with flavorful Indian spices.

That did it! Off we went, planning to enjoy the sunny but chilly spring day dining in the Vogue Center’s promenade. Then I noticed that it was sunny and chilly and extremely breezy too. Never mind! Indoors we went, and felt quite safe with the tables correctly spaced a little more than the required six feet. A table in a far corner made it even better. If I was in a higher-risk category and hadn’t been vaccinated, though, I’d still choose takeout for now.

Figuring out the menu in advance is a bit complicated, as the menu you get when you scroll down BurgerIM’s web page and the takeout menu reached via the blue “View Menu” button at the top of the page are not quite the same, and only the takeout menu shows prices. It’s easy to find out what’s up for sure, though, when you get in and see the huge menu overhead. It’s also worthwhile to check BurgerIM’s Facebook page for daily specials.

It takes a minute to get used to the takeout menu’s format. It offers Classic BurgerIM with build-your-own options. Then there’s a long list of beverages before we move on to the pardon-the-expression meat of the menu, Big BurgerIM. You’ll find 22 variations on the burger here, most of them priced at either $8.99 or $9.99, topping out at the $15.99 Master Piece with its double 1/3-pound Angus beef patty, double bacon, cheddar cheese, fried egg, double onion rings and house sauce. Take that, Big Mac! Also $15.99 is a keto burger, with two Angus beef patties and double bacon and cheese.

That many burgers allows room for creativity, and you’ll find it in such inventions as an aloha salmon burger, dry-aged beef burger or Greek lamb burger (all $9.99).  Feeling fishy? A cod burger and a crab cake burger are both $8.99. If you wish to avoid animal flesh, the Impossible Burger is $11.99, as is a meatless black bean burger; a falafel burger is $8.99. Indian flavors, reflecting owner Raj’s heritage, include aloo tikki and chili chicken burgers ($8.99) and an $8.99 mirchi burger, bringing fiery Indian spice to the patty.

We came for the Indian options and were happy with two tasty burgers and two good sides. As in my curbside visit last year, everything was prepared very well, signaling a kitchen that cares about all the details. The spicy Indian-accented dishes weren’t just hot but showed complex and delicious flavors.

The chili chicken burger ($9.99) was a burger only in that it sits on a bun. It’s not ground meat but a whole chunk of boneless chicken breast of very high quality: halal chicken, according to the menu. It had been grilled and coated with a fiery, taste-bud-tingling red Indian-accented chili paste. It was full of flavor, firm but not tough, and big enough to overflow the bun on all sides. It sat on a decent white sesame bun with a bed of cooling yogurt-based raita and a few leaves of fresh arugula. On top of the chicken were a couple of pale-pink winter tomato slices and a few onion slices.

A side of onion rings ($3.99 a la carte, $2.99 as part of a combo with a burger) also reflected BurgerIM’s commitment to quality. Very thick-sliced onion rings were batter-coated and fried to a golden crisp.

Aloo tikki means potato patties in Hindi, and that’s the base of BurgerIM’s new aloo tikki burger ($8.99). A quarter-pound of potato, pea, and carrot pancake with aromatic spices is placed into a sesame-seed bun with all manner of goodness to kick it up: fiery, bright-red Sriracha aioli, yogurt raita, and familiar burger fixings of lettuce, cheese, onions and tomatoes.

A side of falafel balls ($4.99) rang the flavor bell too: Four spheres, two the size of ping-pong balls and two flattened and smaller, were fashioned from a ground chickpea and tahini dough studded with bits of parsley, deep-fried golden brown and served with a small tub of sesame-scented tahini for dipping.