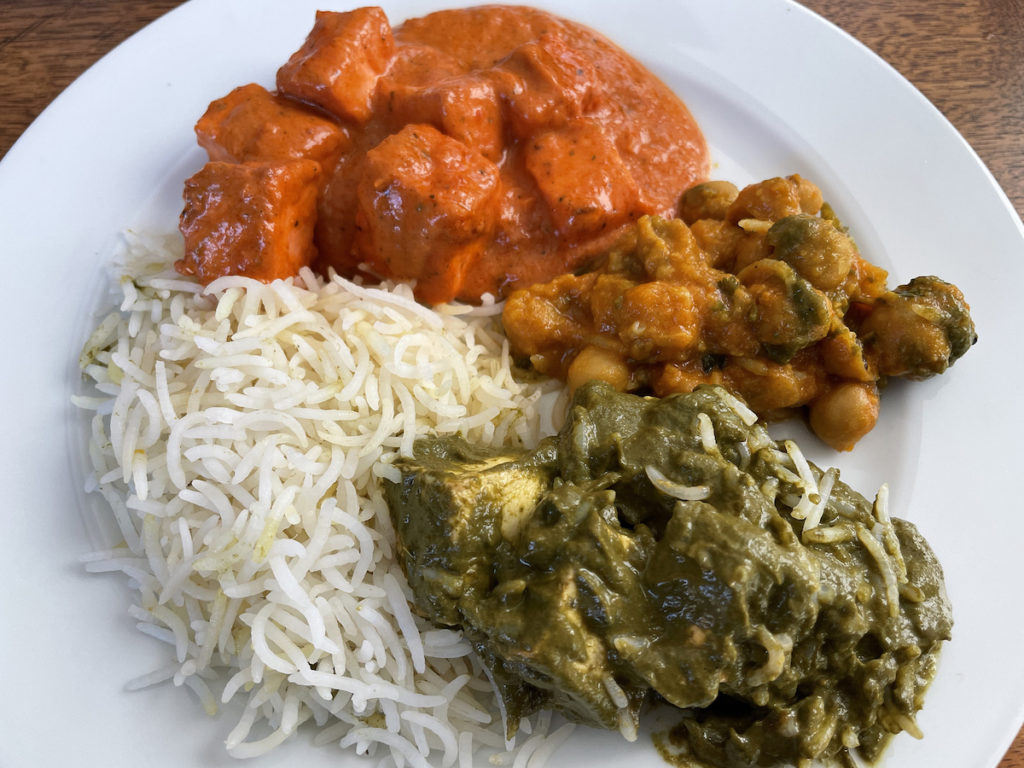 Plate your Tikka House lunch pack on your own tableware.

You might not think that Indian food is anything like pizza. Right? But in these strange times when takeout and delivery dominate the pandemic dining scene, dishes from a quality Indian eatery like Tikka House have one important thing in common with pizza: They taste good hot, or cold, and they take well to reheating.

So when I was in the mood for a delicious Indian lunch that would travel well this week, Tikka House filled the bill.

Tikka House cemented the deal for me this time with a lunch special featured on the takeout menu: Lunch packs — full meals including starter, two curry dishes, rice, naan bread and an Indian dessert — listed at a tempting $8.99 for a veggie lunch pack, $9.99 for non-veg, an amusingly veggie-centric way of designating the pack with meat in it.

At that point I hit a few bumps in the road, none serious enough to detract from the pleasure of a delicious, affordable meal that provided enough food to last for two days. Once I got it.

First, I bumped into a technical challenge: The website is currently down. Uh-oh. The Facebook page had no obvious link to a menu or ordering page. Google, always there in a pinch, linked me to a working page for pickup or delivery.

That worked, sort of. The online ordering form wouldn’t take orders until 12:30 p.m., and I didn’t want to wait, so I phoned Tikka House and reached a friendly person with a bit of a language barrier. We got through it, I placed my order for one of each lunch and some extra Indian breads, and headed over.

When I got there at the scheduled time, though, the kitchen apparently hadn’t started on my order. When it finally came out, I was surprised to discover that the $8.99 and $9.99 prices had risen three bucks each to $11.99 and $12.99. Hmm. The friendly person behind the counter explained that the menu I saw was old.

All right, whatever. The bags were so huge, and the food was so good, it was clear that I was getting value at any price. And in fairness, it appeared that we got three entrees rather than the two that the menu offered. Fair deal.

Next time, though, I’ll skip the packaged meals and order from the extensive menu, which (in the online version) are mostly priced between $10 and $15.

Our meal completely filled two extra-large brown bags and could have been marked “Some Assembly Required.” All the parts were neatly packaged in plastic boxes or tubs or wrapped in foil. Nothing was marked by name, so it’s good that I knew just enough to identify them.

Once we got it figured out, unpacked and re-plated, we had an excellent Indian meal. Indian food for me is all about flavor, blends of aromatics that aren’t all familiar to Western taste buds, but they’re all delicious. Tikka House invariably scores in the flavor department. These chefs know their stuff.

The chana masala chickpea dish was impressive. It was filled with tender, long-cooked chickpeas that had been simmered with aromatics that imparted a subtle hint of anise — tiny bits of yellow squash also were in its spicy brown tomato-based sauce.

Dark green saag paneer was impressive too. A thickly pureed spinach curry, it’s cooked with turmeric and Indian spices and mixed in with firm cubes of paneer, a mild Indian farmer cheese.

The veg entree, paneer makhani, consisted of more Indian cheese cubes in a similar creamy, sweet-hot tomato sauce that, according to the menu, is seasoned with fenugreek, a bitter Indian herb.

Definitely don’t overlook Tikka House’s Indian flatbreads, with 16 options priced from $2 to $4. Crisp, thin papad wafers made from lentil flour came with the meal, as did puffy, tender white-flour naan. The papads were fragile, as they should be, and broke up in transit. This didn’t affect their flavor, though. We enjoyed the variety of a couple of other Indian breads: roti ($2.49), sort of a whole-wheat variation on naan, and chapati ($1.99), a thin whole-wheat flatbread slathered with ghee and folded over.

Gulab jamun is a traditional Indian dessert made of  a powdered milk and flour dough rolled into balls and deep-fried, served with a cinnamon-and-clove scented sugar syrup. These were impressive with their appetizing aromas and contrast between the light interior and crisp crunchy shell.