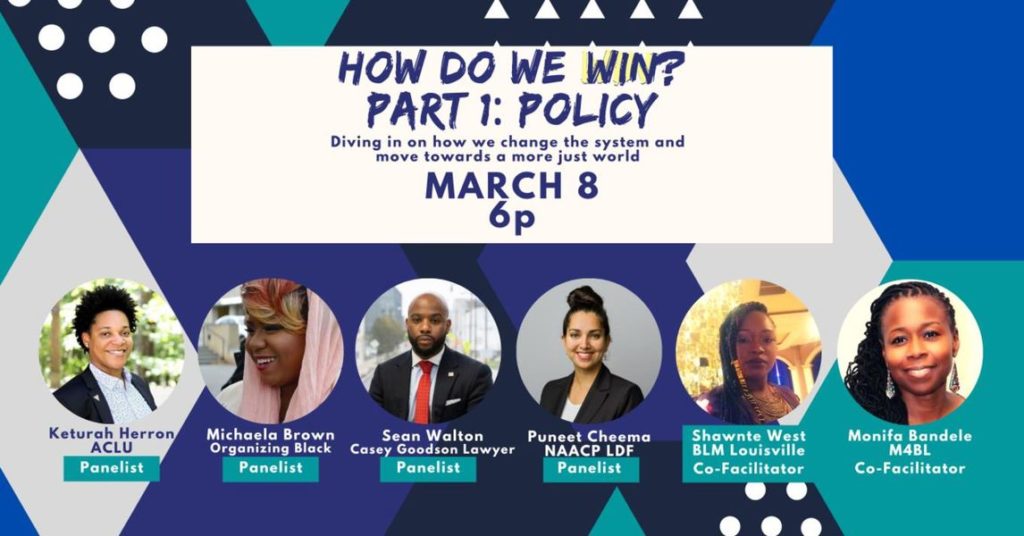 How Do We Win?
Facebook Live
Free  |  6 p.m.
Black Lives Matter Louisville is hosting ”a week-long series of panels commemorating the year anniversary of the senseless murder of” Breonna Taylor. The first of its events is titled, “How Do We Win? Part 1: Policy,” featuring local and national organizers, including Keturah Herron with the ACLU of Kentucky and Puneet Cheema, who works with the NAACP’s Legal Defense Fund. Tuesday’s Part 2 panel is about mobilizing and transitioning from movement to movement. Check Black Lives Matter Louisville’s Facebook page for more panels throughout the week.

TIF 101
Facebook Live
Free  |  6 p.m.
A bill in the Kentucky legislature seeks to establish a tax increment finance district, or TIF, in The West End for economic development. But what’s a TIF, and what are its implications? This panel, convened by Russell: A Place of Promise, will answer that question. Panelists are Jackie Floyd, RPOP’s lead community outreach specialist; Aaron Jackson, the budget director for the Office of Management and Budget for Metro government; Councilman Jecorey Arthur; and Haven Herrington, a resident, homeowner and business owner.

Suffrage: Women’s Long Battle For The Vote
Zoom
Free  |  6-7 p.m.
Historian Ellen Carol DuBois will talk about the political organizers who secured the right for women to vote, including the link between the suffrage movement and the abolition of slavery, as well as the Black, women leaders who were ignored by white suffragists. DuBois is a distinguished research professor in the History Department of UCLA, and the name of this lecture is also the name of her “authoritative account” of the suffrage movement: “Suffrage, Women’s Long Battle for the Vote.”

Reckoning Forum
Zoom
Free  |  6-8 p.m.
Interfaith Paths to Peace is highlighting “Louisvillians doing the work of building a racial justice city” in this online forum. During the first part of the forum, community leaders will share their stories. In the second part, you can join breakout groups to hear more about the leaders and learn how to help them. This month’s guests are Dr. Steven Kniffley, “The Afrocentric Psychologist;” criminal justice advocate Savvy Shabazz; community organizer Richard Whitlock; and former Louisville NAACP President Aubrey Williams.

Revolutionary Reading Group
Zoom
Free  |  6 p.m.
Louisville Political Education for Liberation is taking a break from its regular classes this month. In their stead will be reading groups for selections from the book, “Sister Outsider” by Audre Lorde, a poet and feminist. This week, the group will be studying “Scratching the Surface: Some Notes on Barriers to Women and Loving.”