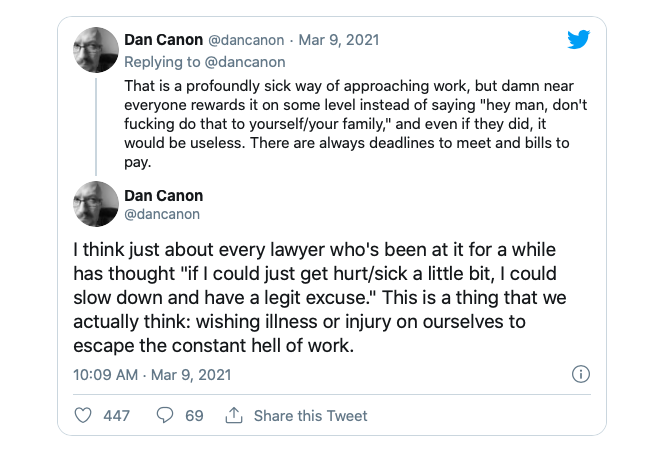 And hoo boy, did #LawTwitter react. It turns out a lot of us think about harming ourselves (if just a little bit) in order to get a break. 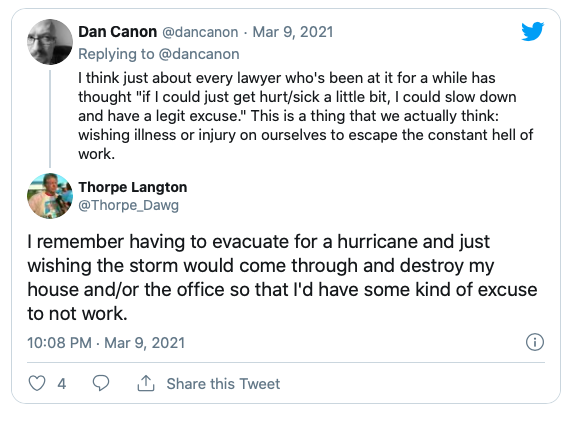 I received a lot more of these responses (and dozens of similar DMs), but this next one meant a lot to me, since the lawyer who wrote it was the first person I ever heard articulate — to a group of horrified first-year law students — the banality of self-harm: 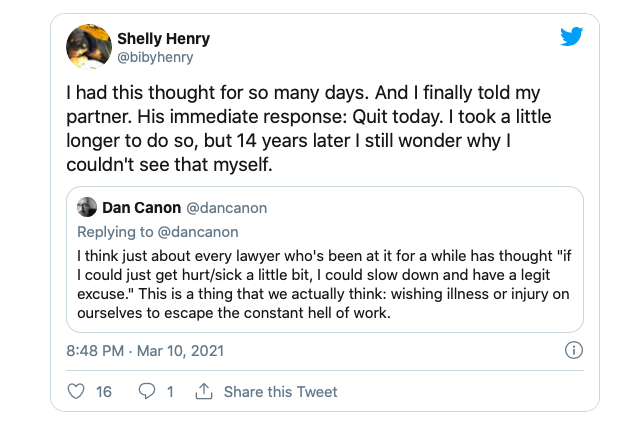 When Shelly (the author of the last tweet) said out loud that she was wishing for a car accident every single day, I didn’t process it as a “sick” thought at the time. To hear her say it was enormously validating, but still my brain was like, “Huh, that’s part of the job for everyone, I guess!”

My original tweet was part of a larger thread about the self-destructive behaviors endemic to American lawyer culture (and the American workplace overall). The thread itself was a bit of sublimation to help me, and whoever else was reading, process the fifth Kentucky lawyer suicide since Christmas.

In fact, as I was finishing up a piece about the four suicides we’d had since Christmas, I heard about number five. And that suicide was just the latest of dozens of colleagues throughout my career. We’re talking people in my immediate community, of course; the annual number of lawyer suicides nationwide is in the hundreds, and undiagnosed mental health conditions for American professionals are quite literally countless.

The purpose of this post is to make one simple point: It isn’t healthy to want to be sick or injured. For any reason. At all. Not even to get a break from the unyielding samsara of deadlines, demands and dickhead opposing attorneys. If you’re thinking “I could hurt myself a little to escape for awhile” it’s not that big a leap to thinking “I could just kill myself and escape altogether.” That’s exactly what many of us do. Making good on that impulse only takes a second.

If you’ve never experienced the desire to smack your car into a tree or have a minor surgery to escape the demands of your daily life, good on you. You probably didn’t need to read this post. Likewise, I’m sure there are quite a few people who entertain such thoughts, but recognize them for the dangerous brain parasites they really are. If that’s you, please feel free to skip the last few paragraphs.

But if you have had these thoughts and dismissed them as perfectly normal occupational hazards, listen to me: That’s fucked up. You are fucked up. Something is fucked up in your head, and you need to try to fix it before something terrible happens.

Equally important is to remember that if you feel this way, it’s not your fault. American hyper-capitalism will steal all your time, rob you of your family, take every last bit of joy you have, sap your will to have ever existed, and still demand more. For you professionals, type-A personalities who like to do everything society expects of you, it may take years — even decades — of juggling chainsaws to realize that your society’s expectations are infinite, and will never be met no matter how many hours you put in. If/when you have this realization, you’ve probably thought about harming yourself in all kinds of creative ways for so long that it just feels like part of your daily routine.

Anyway, I don’t pretend to know what anyone else is going through, or how to fix the legal profession’s blight of suicides. I just know that I was lucky enough to get a break for long enough to realize that wanting to be in a hospital bed isn’t healthy in any way, by any standard, in any profession. It’s fucked up. Don’t let yourself believe it’s normal.