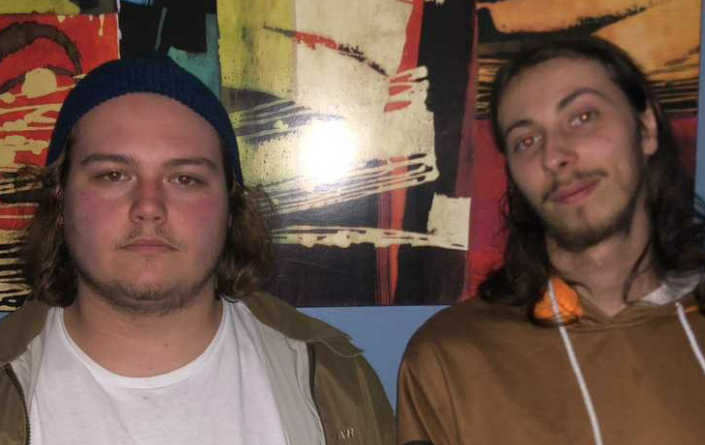 Sometimes, the unsolicited band email hits just right. A couple of months ago, MELANCHOIR sent some preview songs to LEO asking that we listen. We almost always listen to the music you band folks send, and sometimes it’s great, sometimes it’s just all right. This ain’t one of those latter times. On first listen, I was dusting off my anarchy patches and ready to reclaim my ‘90s tiny backpack glory. Their album, SYSTEM OVERLOAD! is somewhere between Bauhaus, Joy Division, Jane’s Addiction, Slowdive and the best Louisville hardcore. In listening, you will find the sweet spot that is uniquely MELANCHOIR and, despite all influences, it will stand mightily on its own two feet… well, four feet — there are two of them. Doug Campbell, 19, and Zack Meredith, 24, are the musical minions behind MELANCHOIR. Listen to me, you will love it and make it part of your summer skating soundtrack.

Fuck, this is good…where are my old docs? The new ones hurt my feet. Barefoot is good, too.

This record is a whole summer mood.

LEO: Tell us about MELANCHOIR.

MELANCHOIR: We are a two piece that records and mixes all of our own music. We try to explore a lot of genres and make sounds that everybody hasn’t heard yet. Whether it be guitars, synthesizers, organs or drum machines, we strive to make sounds that grab people’s attentions and keep them guessing.

Tell us about your new album.

SYSTEM OVERLOAD! is our second album with “THERE’S NO SUCH THING AS LOVE” being the second single. The first album was partially lost to a dead hard drive and was released, unfinished, under the name 2b. We started working on SYSTEM OVERLOAD! right after the release of our first record. We knew when we started working on it that it would be a more refined set of songs with a heavier emphasis on a holistic listening experience. We set out to make a record that carried the listener from point (a) to point (b) with songs that focused on current political matters, historical tragedies and love.

When you’re not making music, what are you listening to?

The local bands that we love are Mosquito, Zerg Rush, Grandma’s Boys and King Kong. Our influences overlap a lot, while being very different. We admire the eclectic style of Xiu Xiu, Death Grips and Talking Heads and the textures of Animal Collective and even some John Carpenter movie scores.

Why do you think music is so important?

Meredith: Music is a necessary art in a lot of ways for the audience and the artists. As an artist, I use music as a tool to express my experience and perspective; but as a listener, music is everything to me. It’s a bottomless pit of cathartic and sometimes transcendent experiences.

Campbell: Music has been a necessity for people around the world since cavemen started banging rocks together. It’s my belief that music is more than art and more like a subconscious primal thing that everybody has to express in some way throughout their life. Whether their expression is humming along to music in the car or actually banging rocks together, it’s all just the act of releasing what’s in every one of us.

LEO: Have you played live?

We have only played a few shows as The Sleeping Bag, but we got the privilege of playing alongside amazing local and touring artists including Yellow Cellophane, Couch Cadet, Shadow Year (New York), Iven (Nashville) and Cut Corners (Indy).

SYSTEM OVERLOAD! is currently on streaming services, including Bandcamp, Spotify and Apple Music. When the world reopens, which looks like it could be soon — and Melanchoir announces a show — get thee to that show and may your ears be blessed.